Alongside parties such as UKIP in the UK and the Front National in France, Italy’s Lega Nord have also taken a notably Eurosceptic stance prior to this month’s European Parliament elections. Duncan McDonnell writes that while the party has joined the Eurosceptic alliance led by the Front National and Geert Wilder’s Party for Freedom, Lega Nord’s policies on Europe do not form a particularly strong part of its appeal to the electorate. He notes that the party was not only strongly pro-Europe in the past, but that both party representatives and members have tended to view Europe as a minor concern in comparison to issues such as Italian federalism and immigration.

Indeed, we can also find variation within individual parties over time regarding their stances towards the European Union (EU) and the importance they attach to these. Take, for example, Italy’s Lega Nord (Northern League) which is running in 2014 as a member of the hard-line Eurosceptic alliance fronted by Marine Le Pen and Geert Wilders. A regionalist populist movement that was founded in 1991, the Lega went from being Italy’s most Europhile party in the mid-1990s to its most Eurosceptic one by the early 2000s – a position it has retained, although both the nature and relevance of its Euroscepticism have oscillated considerably.

While the climate is generally good for Eurosceptic populist parties in Western Europe right now, this is not the case for the Lega. As the Chart below shows, after some lean years in the first half of the last decade, the party did very well in both the 2008 general election and the 2009 EP one – when it achieved its highest national result to date of 10.2 per cent. What made the Lega’s performance particularly impressive in 2009 was that it was in coalition government at the time. In other words, despite the fact that most incumbent parties across Europe during the post-2008 crisis were suffering more than they usually would in elections, the Lega improved its vote share. 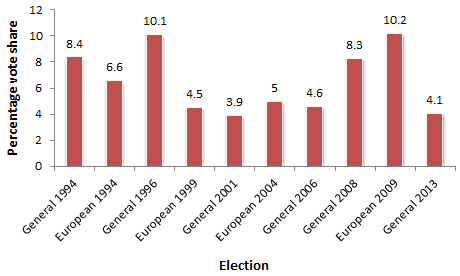 Since 2012, however, the party has declined again. Following the resignation of its charismatic founder-leader Umberto Bossi in April that year due to a financial scandal, the party dropped rapidly in the polls and failed to recover at the 2013 general election when it received just over 4 per cent – its worst performance in more than a decade. The upcoming EP elections are thus crucial for the Lega in order to show it can stem the loss of support and begin to recover.

To do so, the party has adopted a stronger Eurosceptic stance than in previous years. At its annual rally in Pontida (a small town in northern Lombardy) on Sunday 4 May, the slogan on the platform – and on the party leader Matteo Salvini’s t-shirt – was “Basta Euro” (“enough of the euro”). Fortunately for the Lega, few of us in Italy seem to remember that the party in the mid-1990s called for northern regions to secede from the rest of Italy since the unproductive South and corrupt central government in Rome were supposedly endangering the North’s rightful place at the heart of Europe and in European Monetary Union (EMU).

After Italy satisfied the criteria for EMU, the Lega swiftly changed tack at the end of the 1990s and moved to a typically radical right Eurosceptic stance, denouncing the EU as an elite-driven anti-democratic project that promotes globalisation, immigration and secular values, and thus threatens the rights, prosperity, traditions, identities and sovereignty of ordinary people in Europe’s nations.

However, two things remain noteworthy about the party’s Euroscepticism. The first is that, if we were to judge the party by the company it now keeps at European level or its recent campaign slogans, we might think that the Lega wanted nothing more to do with the EU. Yet, if we read their 2014 EP manifesto, we find that the party talks about reforming the European Commission and Parliament, rather than abolishing them or leaving them to their own devices while Italy goes its merry way. This is quite different to the position adopted, for example, by the Lega’s partner, Le Pen’s Front National, which calls for France to leave the EU.

The second, and perhaps more interesting, aspect is the importance the Lega attaches to its positions on Europe – or rather, the lack of importance which it sometimes attaches to them. For example, despite having opposed both the Nice and Lisbon Treaties, the party ended up voting for them in parliament in 2002 and 2008 respectively. On each occasion, the party was in its first year of a term in government and, as one of its representatives told me, Europe was something they were willing to compromise on in order to gain policy concessions from coalition partners on key issues such as federalism and immigration.

This lack of significance within the party for questions concerning Europe became very clear to me between March and May 2009 when I conducted interviews with Lega Nord representatives and grassroots members across northern Italy about how they saw their party’s participation in government, its key goals and so on. Despite these interviews taking place in the three months leading up to that year’s EP elections, Europe was hardly ever mentioned. And, when it was, it was almost inevitably done so in connection with immigration (as part of the claim that “Europe” was not helping Italy repel the invasion of its coasts by boatloads of immigrants).

A similar picture of disinterest emerged when Daniele Albertazzi and I conducted a survey among party members and sympathisers at the Pontida rally, held on 14 June 2009 – shortly after the EP elections and the party’s excellent result. When asked for the three main reasons why they supported the party, 73.4 per cent of respondents ticked the box beside “federalism” and 71.7 per cent “immigration”. No other issue came close. Strikingly, just 2.7 per cent chose “Europe” as one of their three reasons. In sum, at no level of the party did Europe appear important, notwithstanding the timing of interviews and the survey.

The issue of the European Union and integration thus seems like a kite which the Lega Nord has been happy to fly when the political weather conditions are propitious and to set aside when they are not. That being the case, it might be worth classifying such parties not only in terms of “hard” or “soft” Euroscepticism as many scholars have done, but also in terms of the importance which parties give to those policy positions.

It would be impossible to imagine, for example, UKIP making concessions on Europe of the type made by the Lega. But then UKIP is not likely to find itself facing such a choice given that it has yet to even enter national parliament. But for other Eurosceptic parties currently damning the “bureaucratic superstate” as loudly as possible, we may well find – especially if they get close to government in the coming years ­– that, like the Lega Nord in the last decade, “Europe” will be the policy they’ll quietly and willingly sacrifice.

Note: This article gives the views of the author, and not the position of EUROPP – European Politics and Policy, nor of the London School of Economics. Feature image credit: Fabio Visconti (CC-BY-SA-3.0)

Duncan McDonnell – European University Institute, Florence
Duncan McDonnell is Marie Curie Fellow in the Department of Political and Social Sciences at the European University Institute. From September 2014, he will be Senior Lecturer in the Centre for Governance and Public Policy and the Asia Institute at Griffith University in Brisbane. He is the co-editor of Twenty-First Century Populism and has recently published articles on technocratic governments, the Lega Nord, Outsider Parties, Silvio Berlusconi’s personal parties and the relationships between mayors and parties. He is currently working with Daniele Albertazzi on a book entitled ‘Populists in Power’ which will be published by Routledge. He tweets @duncanmcdonnell

The real problem in Italian democracy is not the electoral law, but Silvio Berlusconi’s continued grip over the country’s media