The Spanish economy was particularly hard hit during the Eurozone crisis and the country’s unemployment rate is still around 26 per cent. José Fernández-Albertos writes that while the economic situation would appear to make Spain a natural candidate for Eurosceptic and populist politics, there has so far been no emergence of the kind of Eurosceptic political movements which are expected to do well in other EU states during the European Parliament elections. He suggests that this indicates that despite voter apathy and turbulence in the country’s party system, the idea of Europe nevertheless remains a powerful one for Spanish citizens.

Much like the rest of the European Union, two features define the European Parliament election in Spain: a lack of interest on the part of voters, and the supremacy of national issues over European ones.

A recent poll conducted by the national Centre for Sociological Research (CIS) shows that more than three quarters of Spaniards express little or no interest at all in following the news related to the election, and only 17 per cent know the exact date of the election (the survey was taken in mid April). In spite of efforts to “Europeanise” these elections, the same poll showed that for each Spaniard saying that EU issues will be more important than domestic ones when casting their vote, there are six that say that national concerns will be more important – a historic low for this type of election in Spain. These figures are shown in Chart 1 below.

Chart 1: Responses from Spanish citizens to the question: “When casting your vote in the European Parliament election, what will you take more into account?” (2004, 2009 and 2014) 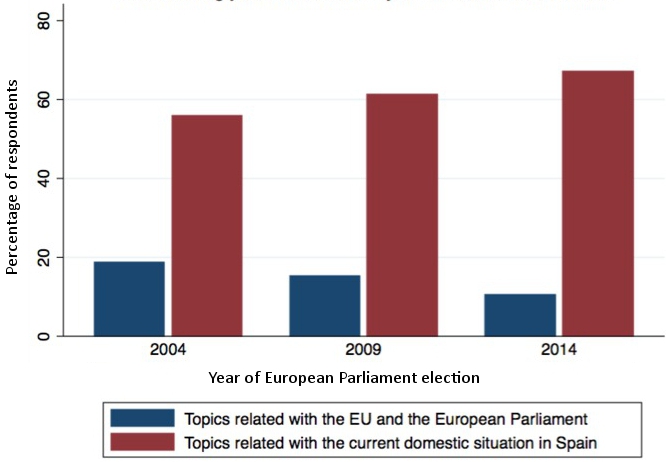 Note: Figures are from the CIS Pre-electoral surveys conducted before the 2004, 2009 and 2014 European Parliament elections.

In this context, the European discourse of the two largest parties: the People’s Party (PP) and the Spanish Socialist Workers’ Party (PSOE) remains obscure. The PP campaign tries to capitalise on the supposed good news on the economic front – employment destruction seems to have come to an end (although unemployment remains at 26 per cent). Currently holding power in Spain, the PP has also attempted to stress the importance of keeping to economic policy commitments within the EU, with a strong defence of Spanish national interests in Brussels. These messages seem to be aimed not at garnering popular support for its policies, but rather at mobilising its partisan supporters in an attempt to limit the punishment it will receive, given the unpopularity of its administration.

Despite the fact that bad economic conditions and widespread discontent are usually good news for an opposition, the PSOE is likely to suffer even larger losses in this election. The causes are multiple and mostly domestic, but European issues are also probably to blame. The PSOE leadership and campaign message is generally seen as unambiguously pro-integration, despite the fact that its support has grown significantly more Eurosceptic during the economic crisis, as shown in Chart 2 below.

Chart 2: Percentage of Spanish citizens who believe the country has benefited from EU membership by party support (2009 and 2014) 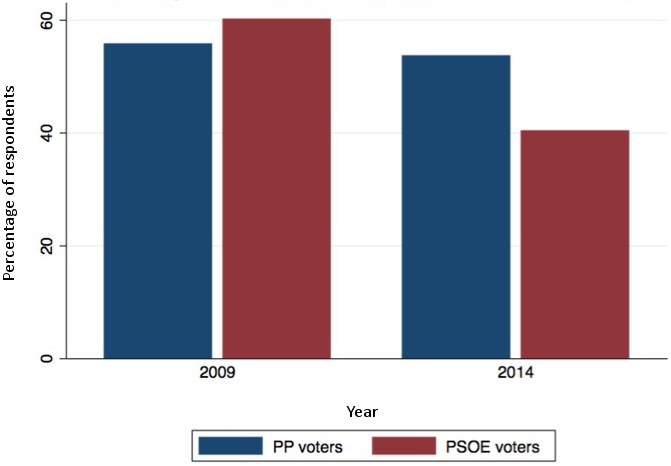 Note: Figures are from the CIS Preelectoral Surveys conducted before the 2009 and 2014 European Parliament elections.

The PSOE campaign has tried to solve this contradiction by promoting the idea that the EU has been governed by “the right” during the crisis. But it is difficult to sell this message when the president of the Eurogroup (the meeting of finance ministers of Eurozone countries) is a Socialist, the vice-president of the Commission in charge of economic and monetary affairs is a Spanish socialist, and the socialist candidate for the European Commission presidency is the current president of the European Parliament.

As the Spanish president, Mariano Rajoy, bluntly put in an interview, “at the end of the day, we are always the same people”, in reference to the fact that conservatives and socialists are jointly in charge of economic policy-making in Europe, and that even Angela Merkel governs with the support of social-democrats. On top of that, rumours in Spain of a future grand coalition make it even more difficult for Socialists to present themselves as a clear alternative, both in Europe and in Spain, to the people who are responsible for the dismal state of the economy.

Given the unpopularity of both PP and PSOE, the fact that EP elections are often considered ‘second-order’ affairs, and the specifics of the electoral system for European elections in Spain (proportional representation in a large national electoral district of 54 seats with no electoral threshold), one would expect that this election will threaten the stability of the two-party system (or “bipartidismo”, as it is called in Spain) that has dominated Spanish politics during the recent democratic era.

If one looks at the polls, it appears that small parties are set to make significant gains. United Left (IU) and the liberal-reformist and centralist Union Progress and Democracy (UPyD) might triple their representation, while peripheral nationalists will consolidate or grow (particularly the secessionist Esquerra in Catalonia) and new parties might enter the European Parliament for the first time.

However, in reality most of the discontent towards PP and PSOE looks set to translate into voter apathy – turn-out is expected to be around 40 per cent. With about 60 per cent of the votes cast looking likely to end up with the two largest parties, it looks as if reports of the demise of “bipartidismo” may be premature. Chart 3 shows a comparison between the predicted vote share for parties in the 2014 European Parliament elections and those in the 2009 elections. 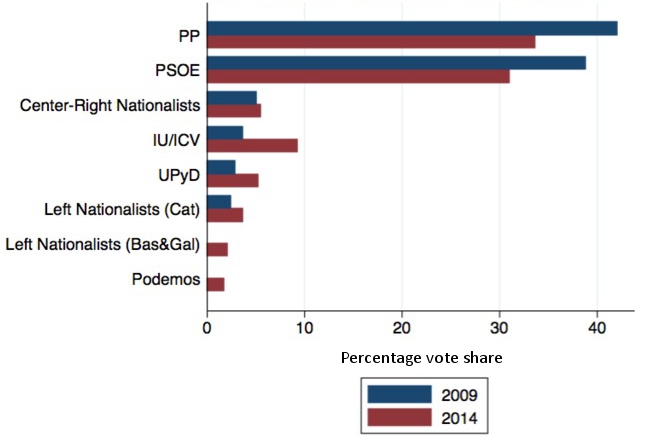 Note: Predictions for 2014 are from the 2014 CIS Pre-electoral survey. For more information on the parties see: People’s Party (PP); Spanish Socialist Workers’ Party (PSOE);  United Left (IU) – running on a joint list with the Initiative for Catalonia Greens (ICV); and Union, Progress and Democracy (UPyD). The Centre-Right nationalists are running as a joint ‘Coalition for Europe‘ list involving several parties; while the Left Nationalists are running separate lists in 2014.

In spite of this turbulence in the party system, Spain remains immune to the emergence of openly Eurosceptic and populist parties. This reflects how powerful and attractive the idea of Europe still is among the Spanish public, even in a context of growing pessimism towards the EU’s policies.

Note: This article was originally published on The Conversation. Read the original article. The article gives the views of the author, and not the position of EUROPP – European Politics and Policy, nor of the London School of Economics. Jose Fernandez-Albertos has received competitive funding from the Spanish Ministry for Science and Innovation to pursue scientific research. Feature image credit: otzberg (CC-BY-SA-3.0)