The EU’s Cohesion Policy (often referred to as the Regional Policy of the European Union) is one of the most important areas of spending in the EU budget. It aims to improve development and generate growth and employment by funding projects in regions across Europe. Johannes Hahn, European Commissioner for Regional Policy, writes on the importance of Cohesion Policy in realising the EU’s key goals. He notes that without Cohesion Policy public investment would have fallen at a faster rate in the countries hit by the crisis, and that future funding will be vital in generating economic growth, improving competiveness and tackling climate change.

In the last few years, with Europe’s deep financial and fiscal crisis, the role of EU Cohesion Policy, and the perception of it, has been cast in a different light. This has gone hand in hand with a fundamental reform of the policy to better equip it to be the strategic investment tool that to some extent it has already proved it can be, and that it certainly needs to be, to help Europe recover and move to growth. Crucially EU Cohesion Policy acts as the financial incentive for the EU to realise its key goals.

I believe that while many were pursuing a mantra of austerity, EU Cohesion Policy prevented a total collapse in public investment when the crisis was at its most painful and dangerous phase. That still holds true. The crisis has had a profound impact on national and regional budgets, limiting availability of funding across all areas of investment. In the EU as a whole, public investment declined by 20 per cent in real terms between 2008 and 2013. In Greece, Spain and Ireland, the decline was around 60 per cent. In the central and eastern countries of the EU, where Cohesion Policy funding is particularly important, public investment (measured as gross fixed capital formation) fell by a third.

Our analysis, illustrated in Charts 1 and 2 below, shows clearly that without EU Cohesion Policy, investments in the Member States most affected by the crisis would have collapsed by an additional 50 per cent. In fact, investments under Cohesion Policy now represent more than 60 per cent of the investment budget – in a country like Slovakia it is more than 90 per cent.

Chart 1: Impact of Cohesion Policy on public investment trends during the crisis (2007-13) 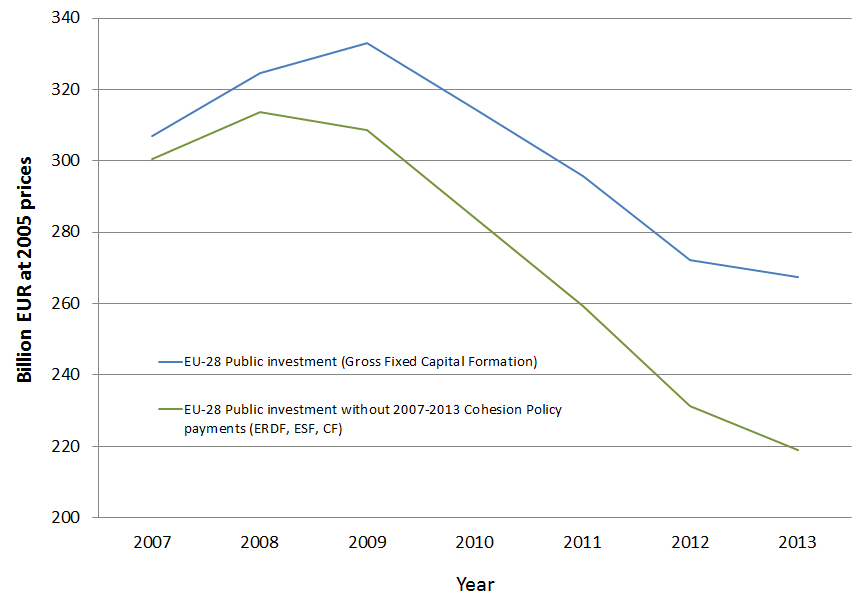 Chart 2: Cohesion Policy funding as a percentage of public investment in selected countries (2010-12) 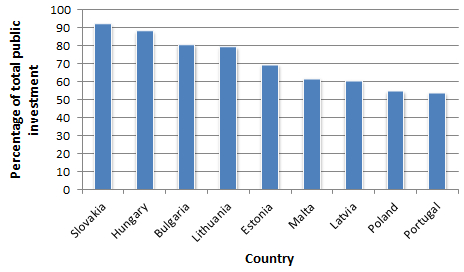 The impact of the policy in terms of jobs is not always easy to measure – partly because we rely on different reporting systems from EU countries. Also, figures for the last period 2007-2013 are still coming in and will do so for the next four years. But already our figures so far suggest the contribution of the EU Cohesion Policy in terms of employment and growth has been significant. Between 2007and 2012, the European Regional Development Fund created nearly 600,000 jobs. We are talking about jobs that would not have been created otherwise.

It invested in 200,000 small and medium enterprise (SME) projects and in 80,000 start-ups, financed 22,000 research-business cooperation projects, provided broadband coverage to well over 5 million citizens and connected 5.5 million people to waste water treatment. As well as this, the investments under the EU Cohesion Policy completed 3,000 km of key European transport networks (15 per cent of the overall TEN-T network) and also crucially doubled the volume of government funding for research and development in the less developed Member States.

For the European Social Fund (ESF), which focuses on training, education, and helping people into work – overseen by my colleague Lázló Andor Commissioner for Employment, Social Affairs and Inclusion – there was also an invaluable contribution: 5.7 million unemployed or inactive people entered employment after receiving ESF support and almost 8.6 million qualifications were gained through ESF support. More than 400,000 new enterprises start-ups and people going into self-employment were reported. All of this has helped to limit the fall in GDP in many countries or to prevent further increases in unemployment.

In the UK, too, the figures speak for themselves: in the 2007-2013 funding period, investments co-financed by the European Regional Development Fund have helped create more than 87,000 jobs; supported more than 29,000 business start-ups and 1,770 research and technical development projects.

These figures are impressive. But actually I think we can do even better. That was the thinking behind my proposals to reform EU Cohesion Policy. Those reforms are now in place and the first contracts – what we call the partnership agreements with each of the 28 member states on how to spend EU Investments over the next decade or so – are now being negotiated and adopted. For 2014-2020, EU Cohesion Policy has become the EU’s primary strategic investment tool to get it on the path of sustainable and people centred growth. Crucially, it provides the main financial incentive for the EU to achieve these goals.

In some respects there has been a fairly radical departure from the past. In other ways, it represents a natural evolution. The policy now focuses more than ever on investments that will improve the quality of life of EU citizens and, crucially, on the real economy. Despite the intense pressure to reduce the budget this time round, more than € 350 billion – the EU’s second biggest spending priority – was approved for Cohesion Policy by EU governments and the European Parliament for 2014-2020. Our reforms will ensure that most of it will support small and medium-sized enterprises, research and innovation, renewable energies and energy efficiency, as well as education, and the fight against unemployment and poverty.

Our most recent economic models in the Regional Policy Department of the Commission provide an indication of what the macro-economic impact could be in the largest beneficiaries. For example, it is expected that for Poland, Latvia, Estonia and Croatia, Cohesion Policy could increase GDP by more than 2 per cent per year during the period of programme implementation. But the effects of Cohesion Policy continue to build up over the years after programmes have come to an end. By 2030, the impact in Poland for example is estimated at 3.6 per cent above what it would have been in the absence of the policy. This means that over the period 2014-2030 each euro invested in Poland through Cohesion Policy is expected to generate almost four euros more in terms of GDP.

But what of countries like the UK, Germany, and the Netherlands? I have spoken to the Länder, provinces, regions and I have to say that even these comparatively wealthy countries recognise the vital role EU regional investment is playing to keep them competitive and support regional growth. Almost without exception, they doubt that financial support would ever be replaced by national funding. They tell me the EU’s budget and its investments – with the seven year budgetary span – gives a predictability to private investors that is invaluable for its leverage effect. From Edinburgh to Rotterdam, Manchester to the German region of Saxony Anhalt, the extreme difficulty in getting finance to start and grow business, develop new industries, and promote research and innovation is one of the main factors holding back Europe’s competiveness.

A key element in our reforms will be investment in the low carbon economy. For the first time, we have attached specific targets on what member states and regions have to spend on energy efficiency and green energy. For example, in what we call the more developed regions of Europe, they will have to spend 20 per cent of their EU regional funding on supporting the low carbon economy. This is not just a contribution to our climate goals. These investments under EU Cohesion Policy will provide a massive boost for European research, innovation and this sector of European industry, not to mention its energy security.

Our initial figures from analysing spending plans so far show that from €16.4 billion in 2007-2013, the new reforms will mean at least €36.7 billion will be invested from EU funds alone. If you factor in what this could in turn leverage in private investment and counting national contributions, we could be looking at more than €50 billion. This is a clear demonstration too of how Cohesion Policy, in line with the Europe 2020 Growth Strategy, makes it the essential tool for achieving the wider European goals of growth, competiveness as well as climate change.

I think EU Cohesion Policy has come a long way since I took up the reins five years ago. It’s not about deserting its traditional goals of convergence or of stopping the financing of infrastructure. But the shift is clear: both in substance as well as style. It can no longer be about one regional airport there, a motorway here, a sprinkling of cultural centres there.

The essence of the new policy should be in its rigour and strategy and I am confident that the spending plans as expressed in the Partnership Agreements from Europe’s regions and member states will reflect this. Our reforms demand a set of conditions for funding, the setting of targets and measuring performance. That will not be about adding red tape to the process, but it should mean a greater transparency and also responsibility to use the money well and wisely for maximum impact. Anything less would be letting our citizens down.

Johannes Hahn will be speaking at an event at LSE on Wednesday 28 May at 6.30PM

Note: This article gives the views of the author, and not the position of EUROPP – European Politics and Policy, nor of the London School of Economics. Feature image credit: Friends of Europe (CC-BY-SA-3.0)