In the run up to the European Parliament elections in the Netherlands there had been some expectation that Geert Wilders’ Party for Freedom might top the country’s national vote. As Stijn van Kessel writes, however, the party only finished in third place behind the pro-EU Democrats 66 and the Christian Democrats (CDA). Nevertheless, he argues that the low turnout in the elections and a general increase in scepticism toward the EU among Dutch voters mean that the result cannot be viewed as a strong vote in favour of the EU.

Many Eurosceptic parties have performed well in the May 2014 European Parliament (EP) elections, including several parties of the populist right. In France, Denmark, and the UK, these parties have even topped the polls. These results are impressive, yet it should be kept in mind that other populist right parties, such as the Flemish Interest and Italian Lega Nord, have suffered losses, and that the radical right in most EU member states in Central and Eastern Europe has failed to make an impact. This means that the dominant notion of a ‘far right surge’ requires qualification, as for instance, Cas Mudde has forcefully argued before.

Another populist radical right case that, quite surprisingly, failed to leave a great impression was the Dutch Party for Freedom (Partij voor de Vrijheid, PVV) of Geert Wilders. The PVV, which is further known for its radical anti-Islam discourse, was the only major contestant favouring a Dutch withdrawal from the European Union. In the election of Thursday 22 May, in which no more than 37.3 per cent of the voters turned out, the PVV received 13.2 per cent of the vote, a loss of 3.8 percentage points compared with the previous EP election of 2009. Consequently, the party received four EP seats, one less than it occupied since December 2011, when the Netherlands was allocated an extra seat in accordance with the Lisbon Treaty.

Even though exit polls on the election day had predicted an even greater loss, the final results were disappointing for Wilders’ party. Opinion polls in the first months of 2014 suggested that the PVV could become the largest party if national elections were to be held. Two days prior to the EP elections, an opinion poll from the news show Eén Vandaag still predicted that the PVV could count on ending first and receiving 6 seats, two more than its main competitors. A week earlier, however, the analysis of pollster TNS-NIPO forecast only a shared third place for the PVV, and predicted that it would be difficult for the party to encourage its supporters to turn out and vote. The Table below shows the final results. 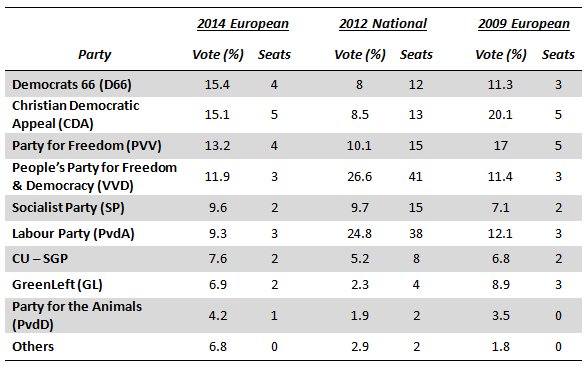 Note: The CU and SGP run independently in national elections; their individual results are aggregated in the columns related to the national election of 2012. There were 26 seats available in both of the European elections and 150 seats in the 2012 national election. For more information on the other parties, see: Democrats 66 (D66); Christian Democratic Appeal (CDA); Party for Freedom (PVV); People’s Party for Freedom & Democracy (VVD); Socialist Party (SP); Labour Party (PvdA); GreenLeft (GL); Party for the Animals (PvdD). Source: www.verkiezingsuitslagen.nl/; http://www.parool.nl/

In the end, the PVV indeed finished third, behind the social liberals of Democrats 66 (D66), the most explicit pro-European party, and the Christian Democrats (CDA). When the results are compared with the latest national election of 2012, the largest losers were the two governing parties: Labour (PvdA) and the Liberals (VVD). This can be considered typical for second-order European Parliament elections, where incumbent parties are often punished half-way through their governing term.

The PvdA was overtaken by its Eurosceptic radical left rival, the Socialist Party (SP), even though the latter’s performance was not spectacular either. Curiously, since the PvdA was involved in a ‘list alliance’ with the Greens (GroenLinks), the party was allocated one seat more than the SP – for the same reason the CDA (allied with the smaller Christian party list CU/SGP) received one seat more than D66. The European Parliament will also host a newcomer from the Netherlands: the single-issue Party for the Animals (PvdD) received one seat.

In view of the fragmented character of the Dutch party system, with the share of the vote spread out thinly over a relatively large number of parties, the Party for Freedom’s vote share can still be considered substantial. Yet the PVV was not expected to lose seats in the EP. There are several potential reasons as to why Wilders’ party did not perform better.

For one, fortunes for the PVV seemed to turn when Wilders made a controversial statement on the eve of the municipal elections of 19 March, which was followed by the departure of several PVV politicians. The Party for Freedom actually played a minor role in the local elections, only fielding candidates in two municipalities. Having performed well – the PVV again became the largest party in Almere and second-largest in The Hague – Wilders’ speech to a crowd of PVV supporters was confident. At one point, Wilders asked the audience whether they respectively desired more or less PvdA, Europe, and Moroccans: after the crowd shouted ‘less’ all three times, Wilders assured his supporters that his party would ‘take care of that’.

The ‘fewer Moroccans’ question provoked considerable public condemnation and appeared to backfire when a number of PVV politicians distanced themselves from Wilders’ remarks or even left the party. Among the defectors were two MPs and Laurence Stassen MEP, who was delegation leader and the prospective top candidate for the EP election. Public support levels for the PVV did not decline dramatically, however, and even seemed to pick up again in opinion polls in the subsequent weeks. This suggests that most potential PVV voters tolerated, or even agreed with Wilders’ Moroccans remark, and were not put off by cracks in the party organisation.

It is also questionable to what extent Wilders’ attempts to forge cross-border ties with controversial populist radical right parties such as the French Front National (FN) and the Austrian Freedom Party (FPÖ) have impacted negatively on the PVV’s vote share. The launch of this European Alliance for Freedom had actually prompted the PVV’s substitute EP delegation leader Lucas Hartong to declare his unavailability for a new term. During the election campaign, other parties regularly confronted Wilders and (less mediagenic) EP top candidate Marcel de Graaff with their foreign partners’ xenophobic, anti-Semitic, and/or homophobic views, and those of FN-founder and MEP Jean-Marie Le Pen in particular.

The PvdA even built a website presenting several controversial statements of ‘Wilders’ friends’. In response, Wilders claimed that his European partners were all ‘decent’ parties, and that present-day FN leader Marine Le Pen had moved her party away from the more extreme positions adopted by her father. In any case, also considering that PVV supporters never really seemed to mind Wilders’ own radical remarks, it is doubtful that the negative campaigning of the party’s opponents had much effect.

In line with the previously mentioned TNS-NIPO analysis, it is more likely that the PVV’s loss is related to the low turnout. This was also the explanation Wilders gave himself after the publication of the exit polls on the election evening. The PVV leader declared that the results did not imply that the Netherlands had become more Europhile, as two-thirds of the voters actually stayed at home. Indeed, it is likely that winner D66 had less difficulty in mobilising its more Euro-enthusiast supporters, who tend to be characterised by higher levels of political efficacy than the PVV electorate.

The good results of the Christian parties (CDA and CU/SGP) also suggest that turnout played a role, as supporters of these parties traditionally have an above average inclination to vote. Then again, a low turnout cannot be the sole explanation for Wilders’ loss, considering that the PVV performed better at the EP election of 2009, when a similar percentage of Dutch voters (36.8) cast their ballot.

Besides focusing on reasons for Wilders’ recent loss, it should in fact be remembered that the PVV’s victory five years ago came at an electoral high point for the party. Thus, rather than portraying the recent EP election results of the PVV as a major setback, as Wilders’ opponents are eager to do, one might actually argue that the results are not that bad, certainly bearing in mind that Wilders had to deal with a considerable number of defections in the run up.

The PVV leader nevertheless has to consider whether campaigning on the basis of a platform primarily built around an appeal to leave the EU is electorally fruitful. Partly due to its complexity and intangibility, European integration is still not an issue that excites many Dutch voters – the low EP election turnout being a reflection of this – even if many citizens have grown more sceptical about the benefits of the European Union and the deepening of integration.

In any case, in view of the public scepticism about the EU, as well as the low turnout, it is quite incorrect to interpret the Dutch results as a ‘vote for Europe’, as D66 leader Alexander Pechtold and Guy Verhofstadt, leader of the Liberal party group in the EP (ALDE), have done. Instead of celebrating the loss of the PVV, it would be more appropriate for Wilders’ rivals to worry about the lack of interest in EP elections and, consequently, the democratic legitimacy of the European Union as a whole.

The three traditionally dominant parties (CDA, PvdA and VVD), in particular, should not walk away from their responsibility to present a clear vision on ‘Europe’ to the electorate, and to provide voters with a better understanding of the EU decision-making process. This is something which they again failed to do in the previous EP election campaign.

Note: This article gives the views of the author, and not the position of EUROPP – European Politics and Policy, nor of the London School of Economics. Feature image credit: Minister-president Rutte (CC-BY-SA-3.0)

Stijn van Kessel – Loughborough University
Stijn van Kessel is Lecturer in Politics at Loughborough University and currently based at the Institut für Deutsches und Internationales Parteienrecht und Parteienforschung (PRuF) at the Heinrich-Heine-University Düsseldorf. His postdoctoral fellowship at the PRuF is funded by the Alexander von Humboldt Foundation. His research interests include populism and political radicalism, party competition and elections, developments in European party systems and related questions of democratic legitimacy.