Brussels blog round up 31 May – 6 June: Juncker negotiations, Spanish monarchy, and is ‘Merkenzi’ the new ‘Merkozy’?

Brussels blog round up 31 May – 6 June: Juncker negotiations, Spanish monarchy, and is ‘Merkenzi’ the new ‘Merkozy’?

Anthony Giddens, writing at the Centre for European Reform, discusses the need for ‘political federalism’ in the Eurozone to accompany the ‘economic federalism’ which has been created by the single currency. He also assesses the situation regarding the new President of the European Commission and why the direct involvement of the Parliament in this process is only a start in attempts to make the EU more democratic. As he argues: “The leading candidate from the European Parliament to be the next head of the Commission, Jean-Claude Juncker, has been widely derided as colourless and a member of the establishment. Yet his name is in the frame as a result of a democratic process. If he is rejected as a result of horse-trading behind closed doors, the EU will be reverting to some of its worst traits.”

Meanwhile, Kalypso Nicolaïdis at Policy Network writes that the EU can only recover its popular appeal if it undergoes a radical democratic transformation. The article argues that with Angela Merkel and Matteo Renzi emerging as the big winners from the European elections, cooperation between the German and Italian leaders (‘Merkenzi’) stands the best chance of bringing about real reform at the European level.

The big news in Spain this week was the abdication of King Juan Carlos I. Charlemagne’s notebook summarises his reign and the role the monarchy has had in Spanish society since the transition to democracy. Cristina Benlloch at Agenda Pública also assesses the popularity of the monarchy among Spanish citizens. She notes that confidence in the monarchy has declined substantially in recent years, particularly among the young and those on the left of the ideological spectrum, as shown in the Chart below.

Chart: Confidence in the monarchy among Spanish citizens by ideological position 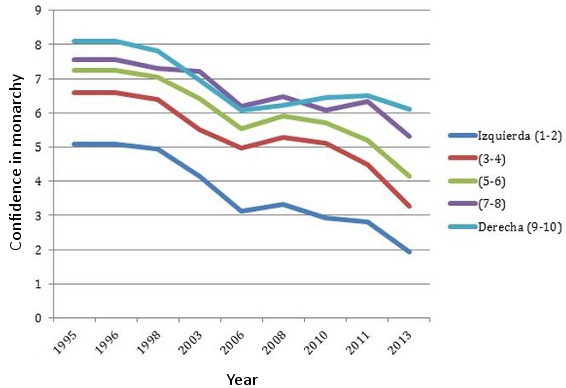 Following the United States’ decision to increase its military support to countries in Eastern Europe, Judy Dempsey at Strategic Europe asks a number of experts for responses to the question: “Should NATO have bases in its East?” Markus Kaim sums up the general feeling among the respondents in saying that, “regardless of the technical details… it is obvious that NATO needs to send a strong signal in response to the Russian annexation of Crimea and the destabilisation of Eastern Ukraine”.

Elsewhere, Volker Stanzel at the European Council on Foreign Relations argues that the West’s response to the Ukraine crisis was ‘not as big a disaster as many think’. The article argues that despite problems in co-ordinating a European response, Vladimir Putin’s actions are likely to damage Russia in the long-term.

Craig Willy sums up ‘what the Front National wants’ in 12 points, based on recent policy documents and statements by the party.

Note:  This article gives the views of the author, and not the position of EUROPP – European Politics and Policy, nor of the London School of Economics. Feature image credit: (Aleph) (CC-BY-SA-3.0)

Brussels blog round up 23 – 29 November: Berlusconi expelled, Scotland’s EU membership, and what now for EU-Ukraine relations?

Brussels blog round up for 18 – 24 August: Hollande’s ‘austerity for the rich’, barriers to movement for same-sex couples, and is Europe lacking ideas?

Brussels blog round up for 1- 7 September: Barroso starts tweeting, Draghi’s big announcement, and a 6-day work week for Greece?