For democracy to function correctly, citizens need to have an adequate level of political knowledge on which to judge political representatives. Media use is generally regarded as being one of the key factors affecting the distribution of this information, but how has the greater media choice provided through the Internet and other mediums affected the knowledge of citizens? Jesper Strömbäck presents a case study from Sweden which maps the changing media use of citizens since the mid-1980s. He illustrates that as media choice has increased, there has also been a rise in the percentage of individuals who either actively seek out news or avoid it. This raises the prospect that greater media choice could create unequal levels of political knowledge across society, potentially reducing social cohesion and creating a fertile ground for protest movements.

Two key assumptions in democratic theory are that in order for democracy to work, people need to be reasonably informed and there needs to be a high degree of equality in terms of the distribution of political knowledge. Without a sufficient degree of political knowledge, people will not be able to form an enlightened understanding of politics, participate effectively, or cast informed votes.

In this context, the role of the media is crucial. Alongside everything else the media do, their most important democratic function is to provide people with the information they need to be free and self-governing. Across democracies, it is also widely established that the news media constitute the most important source of political information. In that sense, modern politics is decidedly ‘mediated’ politics. On a general level, (1) the higher the quality of political news coverage, (2) the more people follow the news about politics and society, and (3) the more even those who are otherwise not very interested in politics follow the news, the greater the prospects are that people will be reasonably informed and that a high degree of equality in political knowledge will prevail.

The rise of new media, the decline of many old media, and an ever-increasing supply of information have, however, raised a host of new questions related to media consumption, its antecedents and its consequences. Most importantly, the fact that the supply of information has increased has forced people to become more selective when deciding what media and media content to choose. Audience preferences have therefore become more important for explaining news media use, which has increased the voluntary segmentation of audiences. This may have far-reaching consequences for political learning and participation – and ultimately democracy.

This is important for two reasons. The first is that it suggests that people’s news consumption cannot be explained by individual-level factors only. The second reason is that the media environment is important not only in itself, but also because it affects how individual-level factors work. In essence, the impact of ability and motivation will depend on the media environment.

Thus far there is however very limited research on the changing impact of individual-level factors on news media use: that is, if and how media environmental factors that vary across time or space moderate the influence of individual-level factors in explaining news media use. While there is plenty of research on changing media use across demographics, there is virtually no research that systematically investigates whether psychological and motivational factors on the individual level have a stronger or weaker impact today compared with five, ten or twenty years ago.

The study is based on the pooled dataset of the annual SOM-surveys at the University of Gothenburg, where each year a random sample of between 3,000 and 9,000 Swedish citizens receive the survey, with an average response rate of 65 per cent. The dataset consists of the pooled data where all the surveys done over the years 1986-2010 are included. This allows us to track changes in news media use over a period of 25 years. The key dependent variable is a ‘Total News Media Use Index’, which includes respondents’ use of news media on four main platforms: morning newspapers (in print and/or online), tabloid newspapers (in print and/or online), national television and national radio.

When patterns of different types of news media use are examined over the period 1986-2010, findings indicate that newspaper reading is declining slowly, tabloid reading is increasing after many years of decline, while the consumption of television and radio news is displaying less of a continuous trend. In the case of both morning newspaper and tabloid reading, increasing readership of their online versions has counteracted and offset some of the decline in readership of the print versions.

However, when the total news media use is examined by the use of the ‘Total News Media Use Index’, the mean level of news media use proves to be remarkably stable across time. Focusing on aggregate trends may hide underlying changes, however. And in fact, although the mean level of media consumption remains more or less constant across the last 25 years, a closer analysis reveals that there are some important changes across time. Most importantly, there is an increasing variation among the population with respect to the level of their news media use.

According to theory, changes in media environments have affected the influence of individual-level factors such as political interest on news media use. As media choices and the opportunities increase, motivations and abilities become more important. Those who are highly interested in news increasingly tune in, while those who are less interested increasingly tune out. If this holds true, the share of both news seekers and news avoiders should increase across time.

To investigate this and test our first hypothesis, we classified people as either news-avoiders (a level below 9 on the Total News Media Use Index) or news-seekers (a level above 20 on the Total News Media Use Index), and compared how the share of these groups changed across time. The results are presented in the Chart below, showing that both groups indeed increased in size between 1986 and 2010. 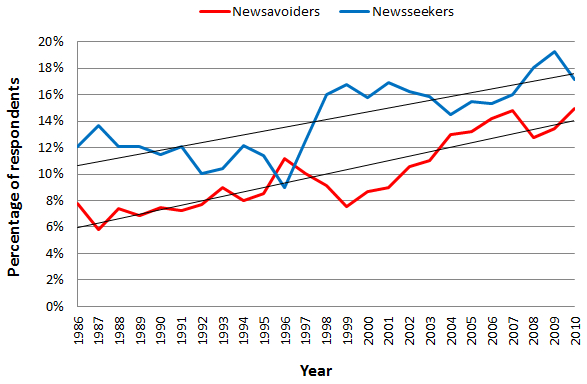 Note: The chart shows how the percentage of individuals in the ‘news-avoiders’ and ‘news-seekers’ groups have changed over time. These groups are based on a ‘Total news media use index’ which puts individuals on a scale between 0 and 27 depending on their media use. News-avoiders are those who lie below 9 on this scale, while news-seekers are those with a value above 20. The dark lines show the trends for each group, while the red/blue lines show the actual values. Figures are taken from the annual SOM-surveys conducted by the University of Gothenburg.

In essence, what this suggests is that changes in media environments and increasing media choice has created greater opportunities than ever to find news about politics and current affairs – but also greater opportunities than ever to avoid news altogether. While those who are interested and have the motivation follow the news more intensively than before, those who are not interested increasingly tune out from the news media and their coverage of current affairs.

This interpretation is supported by another key finding in the study, namely that the impact of political interest on news media consumption – as hypothesised – increased over the time period, both with respect to total news media use and – with the exception for tabloids – different media types.

This pattern holds even after controlling for a host of other important variables, such as age and education. Moreover, the results also show that both the effect and the explanatory value of political interest increased over time. The effects of education and political interest also take leaps in the last five-year period, indicating changes that are about to amplify and accelerate the general trend toward increasing divergence among social groups with respect to their news media use.

These results are particularly noteworthy considering that Sweden – compared to the United States where the hypothesis of changing impact of individual-level factors due to media environmental changes was first proposed – constitutes a tough case to test the hypothesis of the increasing impact of political interest on news media use. Overall media consumption has been high and rather stable in Sweden; media choice has not been as great or increased as much; and homogeneity in media use patterns has always been greater in Sweden than in the United States. Nevertheless, the same pattern of results can be found in both countries.

As the media constitutes the most important source of political information, and as research has shown that there are linkages between news media use, political knowledge and participation, this process of voluntary segmentation might have significant democratic ramifications. Most importantly, the groups of news-seekers and news-avoiders will likely become larger and the differences between them greater, and this is likely to result in increasing knowledge gaps and participation gaps – and thus decreasing political equality in terms of political knowledge and participation. The increasing differences in terms of news media use and political knowledge might in turn weaken social cohesion and create a more fertile ground for populist and protest movements. This might, in fact, constitute one of the most important democratic challenges facing established democracies around the world.

To read the full study, see the author’s recent article in the International Journal of Public Opinion Research

Jesper Strömbäck – Mid Sweden University
Jesper Strömbäck is professor in journalism and media and communication at Mid Sweden University. He has published more than 100 books, book chapters and journal articles. His most recent books are The Mediatization of Politics. Understanding the Transformation of Western Democracies (co-edited with Frank Esser, 2014), Opinion Polls and the Media. Reflecting and Shaping Public Opinion (co-edited with Christina Holtz-Bacha, 2012) and Political Public Relations. Principles and Applications (co-edited with Spiro Kiousis, 2011).