In several countries across Europe younger voters exhibit much lower levels of turnout than older citizens. However, less well understood are the differences in turnout among young people. Based on elections in Finland and Denmark, Yosef Bhatti, Kasper M Hansen, and Hanna Wass show that turnout is highest when young people can vote immediately after being enfranchised, but then falls away sharply. This phenomenon, they argue, supports some of the arguments in favour of lowering the voting age to 16.

In a recent article, Richard Berry and Anthony McDonnell show that young people are less likely to vote than older citizens in the UK. The difference is evident even when comparing 18–34-year-olds with the highest levels of education and the least educated voters over 55. These fascinating results highlight the so-called ‘puzzle of participation’, addressed by Brody in 1978. Despite the dramatic rise in the general educational level, the overall turnout has declined.

The curvilinear relationship between age and turnout is well-established in the literature. Turnout is lowest in the beginning of the life cycle and slowly increases with the adoption of various adult roles. Participation remains high during middle age when church attendance, increased activity in the community and various organisations, stronger party attachment and growing income all contribute positively to turnout, as suggested by Strate et al. (1989). As Berry and McDonnell remark, lower turnout among younger voters cannot be regarded solely as a specifically ‘young people problem’. Several pooled cross-sectional analyses from Europe, Canada and the U.S. have reported a generational effect in electoral participation alongside with life-cycle and period effects. This means that younger cohorts maintain their tendency to participate at lower rate much longer in the adulthood than their predecessors. Such observations have substantial implications for representative democracy since turnout may continue to decline in future as the proportion of young cohorts in the electorate increases.

Our findings from Denmark and Finland are in line with the previously identified curvilinear relationship between age and turnout. However, they also add an important previously unobserved nuance: age has a different effect on electoral participation in the very beginning of the life cycle than can be detected on the basis of survey data. The analyses are based on individual-level register data. In the Finnish context, we used a ten per cent sample of all 18–30-year-old voters (N=80,699), compiled by Statistics Finland. The information on voting from electoral wards was linked with population registration data on the basis of personal identification numbers. The age of each individual is listed in months. The Danish data cover 44 municipalities in the municipal elections of 2009 (N=2,336,772). After the elections, the electoral registers were computerised manually by registering for each social security number whether a person voted. As age was available directly based on the social security numbers, the linkage rate was 100 per cent. The data include age in days.

As shown in Charts 1 and 2, the impact of age on turnout is plotted in two-month intervals from 18-year-olds up to 30-year-olds. In both countries, turnout among 18–year-olds is substantially higher compared to their older counterparts. While the pattern is identical, the drop in turnout during the first years of enfranchisement is even steeper in Denmark where the turnout of 18-year-olds is not reached before the age of 34.

Interestingly, we can also see substantial variation even within the group of 18-year-olds. This observation is important for two reasons. Firstly, it verifies that the drop in turnout is not only due to a first-time voter effect, since the variation primary occurs within the group of first-time voters. The peak in turnout is most noticeable when voting takes place immediately after enfranchisement. Within the next two years, voting propensity declines by 0.3 per cent each month in Finland, and by one percentage point per month in Denmark. This can be considered to be quite a substantial effect. Secondly, it indicates that the more aggregated measure of age is used, the more the decline in turnout among young voters is underestimated. For Denmark, for instance, the decline was from 57.0 to 42.6 per cent when measured in one-year intervals. When two-month intervals are used, the decline is even bigger, namely from 62.5 per cent (N=5,437) to 42.2 per cent (N=6,167).

Chart 1: Turnout by age (in two months intervals) in the Finnish parliamentary elections of 1999 (10 percent sample) (%) 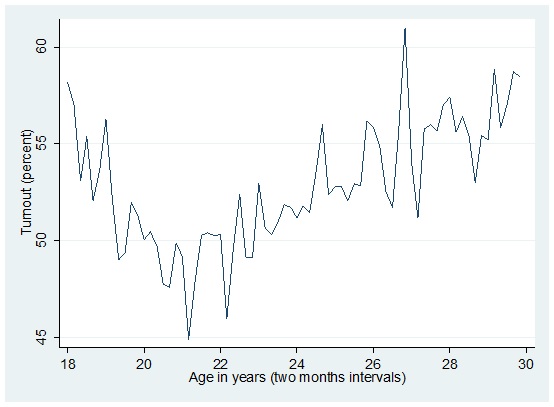 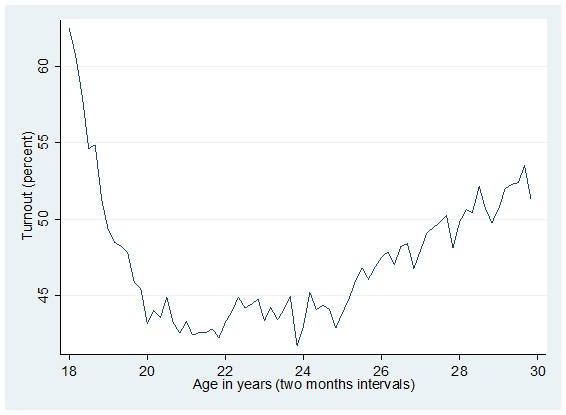 The fact that specific voting pattern among the youngest voters has not been identified in the existing literature may be due to several reasons. Firstly, the most obvious possibility is that the phenomenon would be exclusively prevalent in the contexts examined in our study. Though we certainly do not claim that the decline in turnout during the first years after enfranchisement is universal, there are strong indicators that the decline is a more general phenomenon. In our original study, we also used data including registered voters in several elections in Lubbock, Texas. In addition, aggregate-level data from Germany and validated turnout information from Swedish elections studies reveal the corresponding pattern. Secondly, differential misreporting in surveys may be a contributing factor to the underestimation of the turnout drop among the young voters. A third possibility is related to the sample size in most surveys which requires that turnout is reported only among age groups.

Our findings have several implications for studies of youth electoral participation. Firstly, the results suggest that the overall understanding of the youngest age group as coherently the most passive voters should be further examined. Secondly, the results illustrate the particular characteristics of the years between 18 and 21 which may also account for the decline in turnout among 19–21-year-olds. Between the ages of 18 and 21, young adults leave their parental home and become less affected by their parents’ higher propensity to vote. Leaving home may actually in the short run have a negative impact on turnout. More broadly, the decline in turnout from the age of 18 to the age of 21 may be connected to the specific transitional nature of that period in an individual’s life cycle. Given the general prolongation of adolescence already noticed several decades ago, many adult roles are now acquired much later in life than they were among the older generations. Compared to 18-year-olds, voters in their 20’s are much more occupied with various pressures, such as applying for higher education.

Finally, our findings could be seen as lending further support for some of the arguments advanced in favour of lowering of the voting age. Mark Franklin (2004) has argued that acquiring a voting habit would be substantially easier, if voters were still at high school at the time of their first elections. The habit of voting could be learned in the context of a civic class project. Since our results show, in line with Franklin’s argument, that at the age of 18 people are substantially more prone to vote than  in the following few years and since an individual on average faces his/her first elections two years after enfranchisement, lowering the voting age to 16 could be optimal.

This conclusion seems to be supported by empirical evidence from Austria, the only European country where 16–year-olds are eligible to vote in all elections. In their recent post, Markus Wagner and Eva Zeglovits argue that the Austrian experience shows that there is much to gain from much to gain from giving 16-year-olds the vote. Their level of motivation, political interest and political knowledge is not lower than their slightly older counterparts. In fact, their earlier study show that political interest among 16–17-year-olds increased after being granted the right to vote. Consequently, experiencing the first elections in a social environment that is favourable for participation and being more motivated than the older peers, can have a positive effect on a young citizen’s political socialisation.

Note: This article gives the views of the authors, and not the position of EUROPP – European Politics and Policy, nor of the London School of Economics. Feature image credit: European Parliament (CC-BY-SA-NC-ND-3.0)