Rating democracy in the EU

The Economist Intelligence Unit’s ‘Democracy Index 2013’, which was released earlier this month, provides a measure of the quality of democracy in 167 countries across the world. The index assigns each state a ‘democracy score’ based on a variety of factors such as electoral processes, the functioning of a state’s government, and civil liberties. The 2013 report provides a varied picture of democracy in European countries. While some states, such as Norway and Sweden (first and second place overall), performed extremely well, others finished lower down the list. The Chart below shows the scores for each EU state. 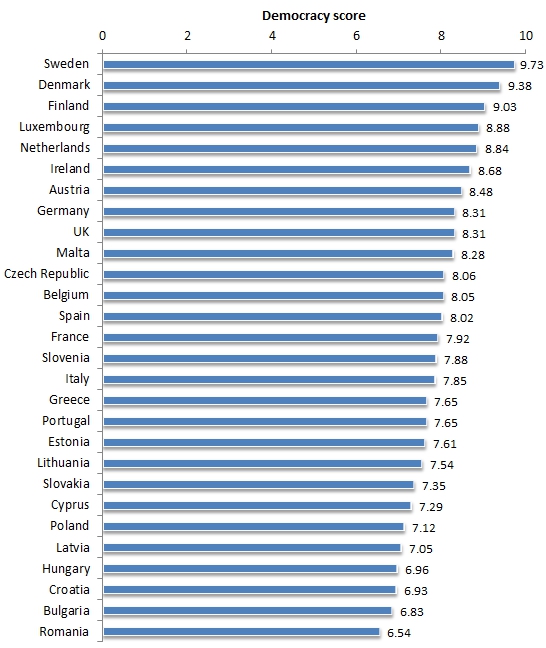 The report also includes a classification system based on each country’s score. States with a score of 8 or above are classified as ‘full democracies’, states with scores from 6-7.9 are deemed ‘flawed democracies’, those with a score of 4-5.9 are ‘hybrid regimes, while states with a score below 4 are defined as ‘authoritarian regimes’. Using this classification there are no less than 15 of the 28 EU states who fall into the ‘flawed democracy’ category, although it should also be noted that European countries make up 7 of the top 10 states in the study overall.

There are a number of reasons for the low scores given to the countries in the ‘flawed democracies’ group. In France, for instance, the country scores relatively highly on electoral processes and civil liberties, but poorly on political participation by citizens and on the functioning of government: largely because the methodology appears to penalise countries with strong Presidents and weak national legislatures. The report also indicates that countries such as Greece, Italy and Portugal have been marked down as a direct consequence of the Eurozone crisis on the basis that ‘policy is no longer being set by national legislatures and elected politicians, but is effectively set by official creditors, the European Central Bank, the European Commission and the IMF’.

Elsewhere, Paul Krugman presents an interesting Chart on the cost of German labour. The Chart illustrates that German labour costs in manufacturing sectors are among the highest globally, despite the country’s consistently strong export performance. He writes that the German case highlights that exports are not simply driven by cheap manufacturing, but are also influenced by factors such as an exporter’s reputation for producing high quality goods.

The FT’s Brussels Blog covers the alliance between Beppe Grillo’s Five Star Movement and Nigel Farage’s UKIP in the European Parliament. The article notes that after UKIP’s ‘Europe of Freedom and Democracy’ group had lost the support of the Finns Party and Danish People’s Party, the prospects of Farage organising a coherent bloc in the Parliament looked bleak. However the alliance with the Five Star Movement has turned this situation around despite, as the article states, the fact that ‘their positions on everything from austerity to the financial transaction tax are entirely at odds’.

Global consequences of the Ukraine crisis

Finally, the European Council on Foreign Relations lists ‘ten global consequences of the Ukraine crisis’. Among the most important is their view that the response of Asian countries to the crisis highlights that they still view western intervention in sovereign states as a key threat. In theory, the principle of self-determination adopted in Crimea should pose a problem for states such as China, who have their own issues with regional autonomy, but the reaction of Asian governments has shown this concern comes second to limiting western influence.

Note:  This article gives the views of the author, and not the position of EUROPP – European Politics and Policy, nor of the London School of Economics. Feature image credit: © European Union 2014 – European Parliament (CC-BY-SA-ND-NC-3.0)

Brussels blog round up 26 October – 1 November: the Commission’s ‘yellow card’, the cost of austerity, and is it legitimate to ban extremist parties?

Brussels blog round up for 20- 26 October – EU development aid at the crossroads, hunger strikes in Italy and Poland, and will the eurocrisis break-up member states?

Brussels blog round up 23 – 29 November: Berlusconi expelled, Scotland’s EU membership, and what now for EU-Ukraine relations?

Brussels blog round up 22 – 28 February: Merkel in the UK, visa waivers for the UAE, and how should the EU engage with Russia over Ukraine?