Chart of the week: British Euroscepticism by age group

The polling organisation YouGov has been running a series of polls on British attitudes toward the European Union, with the figures throughout July suggesting that if a referendum were to be held on Britain’s EU membership today, the campaign would be neck and neck. Perhaps more interesting than the overall figures, however, is the persistent difference between different age groups.

It’s long been recognised that younger citizens in the UK are more likely to have a positive view of the country’s EU membership than older citizens, but the YouGov figures from July, shown in the Chart below, illustrate just how large this age gap actually is. According to the most recent figures, the 18-24 age group would vote overwhelmingly to stay in, while those aged 60 or above would be almost as strong in their opposition.

Chart: Voting intention in a referendum on the UK’s EU membership by age group (July 2014) 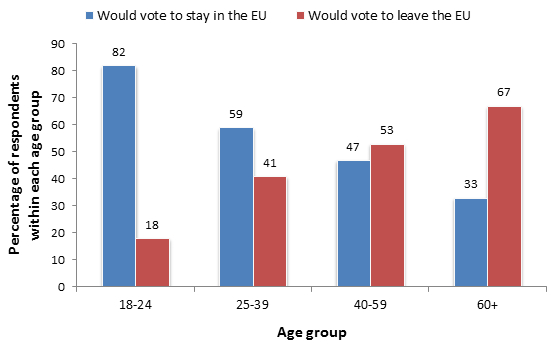 Note: Figures are from YouGov and represent the overall support once ‘don’t know’ and ‘would not vote’ responses are excluded.

As the Economist reports, Spanish unemployment has declined from 26 per cent to 24.5 per cent in the last year. This nevertheless still leaves the country with one of the highest rates of unemployment in Europe. The article notes that the figures raise questions over whether labour reforms implemented by Mariano Rajoy’s government since 2012 have contributed to the fall in unemployment or whether the fall is largely due to other factors. With Spain due to hold parliamentary elections before the end of 2015, the issue is likely to form one of the main battlegrounds in the campaign.

On 29 July, the EU announced a number of tougher sanctions against Russia over the Ukraine crisis. Judy Dempsey at the Strategic Europe blog argues that in addition to sanctions, the EU and NATO should also adopt more ‘hard power’ measures by placing permanent NATO bases in East European states, such as Poland. Assessing the Russian perspective on the crisis, Nouriel Roubini at Project Syndicate notes that while sanctions may be viewed as necessary by the EU and the United States, they have the potential to push Russia toward strengthening the Eurasian Union as a rival integration project to the EU.

Meanwhile Mark Leonard at the European Council on Foreign Relations writes that the clash between Russia and the West suggests that globalisation is far from uniform and that we could now experience some degree of global fragmentation, including in areas like the internet.

Finally, Open Europe discuss plans to hold a referendum in Switzerland on the country’s bilateral relationship with the EU. This follows another referendum in February where a majority of Swiss voters advocated the renegotiation of free movement rights granted to EU citizens.

Note: This article gives the views of the author, and not the position of EUROPP – European Politics and Policy, nor of the London School of Economics. Feature image: Mariano Rajoy, Credit: Partido Popular Castillo y Leon (CC-BY-SA-3.0)

Brussels blog round up for 28 July – 3 August: Croatia shames tax evaders, Draghi disappoints and will Europe become a world power?

Brussels blog round up 3 – 9 August: Gibraltar-Spain, Middle East peace talks, and is there any point to economic analysis?