Procedures for raising the number of female politicians in parliaments and governments have been a key focus in several European states over recent decades. Máriam Martínez-Bascuñán writes that the issue should be seen not simply as a procedural one, but as a fundamental element of democracy. She argues thatthe issue of women’s representation is an indicator of the degree of human development within societies, and that with less than 36.8 per cent of MEPs being women in the 2014-19 European Parliament this should also be a priority in efforts to improve EU democracy.

In recent years, many authors have provided empirical evidence of the existence of a gender gap in what Nancy Fraser calls “the means of interpretation and communication in a society”. They have likewise given evidence of an overwhelmingly masculine presence in public and private forums and institutions. The ‘politics of presence’ is still a key issue in the major debates on the theories of justice because being there means being counted on. This is the reason why the exclusion of women’s voices from public expression and institutions continues to perpetuate one of the most dangerous ways of undermining the principles of justice that necessarily order our democracies.

To begin with, we need to clarify that evidence of such a biased reality is not always seen as problematic or, what is worse, is sometimes not seen at all. In a society in which all its members are formally free and equal, in which the predominant public morality is committed to the principles of equal treatment for everyone, it seems reasonable that judgements regarding superiority or inferiority over members of that society should be made on a case-by-case basis, that is to say, according to their individual aptitudes.

This means that if a woman achieves visibility and recognition in public spaces it is because “she deserves it”, and the women who don’t, do not deserve it. Following this reasoning, if we consider that among the total membership of the Real Academia Española de la Lengua (Spanish Royal Academy of Language), for example, over 80 per cent are men, the explanation must be found in the personal worthiness of female authors: they don’t deserve it. This kind of reasoning (which places the burden of proof on those discriminated against) prevents us from noticing that the way we have set up the order of things is what gives rise to these inequalities as personal handicaps.

However, social scientists are aware of the importance of these data in highlighting a structure of inequality. Any social scientist knows that an inferior presence of women in public opinion forums, on panels, debates or cultural supplements, is not due to their individual incapacity, nor to mysterious forces of chance, but to an unequal social structure in which women encounter more obstacles to achieve the same levels of public visibility, presence and recognition. We should remember that public recognition is linked to power sharing. A word recognised is a word authorised, a word that is obeyed even if only through listening to it. Therefore, recognition is a type of cultural capital that is still predominantly masculine. But what are the implications of this?

The fact that, as the Chart below shows, just under 36.8 per cent of the European Parliament’s members are women, for instance, means that there is a systematic failure in the social and institutional structure, indicating that women – who, it must be emphasised, are one half of the population – are not proportionally present in decision-making processes. Such results show a lack of political will to ensure that the decisions reached at all levels, affecting the lives of all citizens, are made by both men and women. This is why the inclusion of women promotes justice more effectively, guarantees equity by including all opinions on the public agenda items, and allows a greater number of interests and needs to be recognised during deliberations conducted in the public realm. 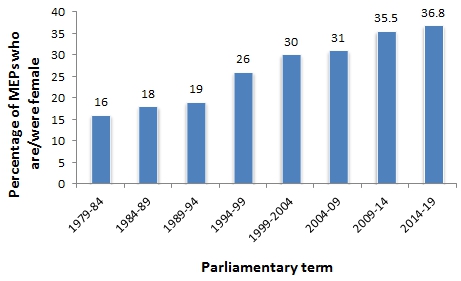 Quotas are a palliative remedy against this structural injustice, but they are not enough. Some people, however, are more intent on questioning the quota system than on studying which complementary measures, from a social and institutional organisation point of view, should be implemented as a solution against sexist discrimination. Even creative measures aimed at challenging the widespread stereotypes and clichés that reinforce the positions of power mainly occupied by men.

As they are so widely disseminated, these cultural expressions become commonplace, universal, and therefore part of everyday life. For example, no one finds anything special in seeing six men take part in a political debate. Can you imagine the same situation with six women? And if you can imagine it, why doesn’t it happen? Looking at gender in the generation renewal currently taking place in this country’s political class, shouldn’t we find it remarkable that the “young promises” destined to lead the main political parties are all men?

Quotas should be understood as complementary to many other procedures, not a measure used as negative discrimination against men, but rather to build more emancipated societies. This is what Carol Gilligan was referring to when stating that the situation of women is the fundamental key to understanding social order, and to maintaining or transforming that order from a sufficiently deep level to make it truly revolutionary. New voices create new methods: new ways of organising society, of regarding it and representing it.

If only men speak we are building a biased vision of reality. And this will have a huge effect on the construction of social order and on the preservation of the fundamental principles underpinning the development of our democracies. Any media that fails to include women’s voices in a proportional manner is not pluralistic. A political party that does not adopt zipper lists is not democratic. As Martha Nussbaum says, the issue of women’s voice and presence is an indicator of the degree of human development within societies. Taking the above into account, and in view of the statistics, how developed is our society?

Note: This article gives the views of the author, and not the position of EUROPP – European Politics and Policy, nor of the London School of Economics. Feature image credit: ©European Parliament/Pietro Naj-Oleari (CC-BY-SA-NC-ND-3.0)

Máriam Martínez-Bascuñán – Autonomous University of Madrid
Máriam Martínez-Bascuñán is an Assistant Professor and based at the Autonomous University of Madrid, Spain. Her work focuses on social and political philosophy and feminist theory. Her main works are “On Immigration Politics in the Context of European Societies and the Structural Inequality Approach”, in The Philosophy of Iris Marion Young, Ann Ferguson and Mechthild Nagel (eds.), New York: Oxford University Press, and “Is Multiculturalism Good for Immigrants?” REIS, 135, 2011, pp. 27-46.