Brussels round up: Iraq, Erdoğan wins, and what can Fantasy Premier League tell us about discrimination in the labour market?

Brussels round up: Iraq, Erdoğan wins, and what can Fantasy Premier League tell us about discrimination in the labour market?

EU support for the Kurds in Iraq

EU foreign ministers are currently holding an emergency meeting to discuss whether to provide support to the Kurdish forces operating in Iraq as a way of halting the advance of forces allied to the Islamic State (IS). Julien Barnes-Dacey at the European Council on Foreign Relations argues that Europe is still searching for answers on Iraq and that support for the Kurds may be the beginning of a long and difficult military campaign. He also notes that any solution must also focus on the continuing crisis in Syria.

Meanwhile Gareth Evans at Project Syndicate discusses the wider action being taken in Iraq to protect the country’s Yazidi minority. He states that in contrast to the original US-led intervention in Iraq in 2003, which raised issues of international legality due to the lack of a UN Security Resolution, the most recent intervention was the ‘right kind of involvement’ as it came at the formal request of the Iraqi government. He concludes by saying that “there can be no better demonstration of good international citizenship than a country’s willingness to act when it has the capacity to prevent or avert a mass atrocity crime”.

On 10 August, Turkey’s Prime Minister, Recep Tayyip Erdoğan, won the country’s presidential election, becoming the first directly elected President in Turkey’s history. Charlemagne’s notebook discusses the implications of the election for Turkey’s constitution, with Erdoğan expected to try and increase the relatively limited powers invested in the presidency at present.

Perhaps equally important was the relatively strong showing by Kurdish candidate Selahattin Demirtaş. As Sibel Oktay writes at the e-international relations blog, the country’s Kurdish minority is likely to ask for concessions from Erdoğan in return for supporting constitutional change. Erdoğan’s ruling Justice and Development Party (AKP) does not currently hold the required majority in parliament to amend the country’s constitution and would therefore require support from elsewhere to assign more executive powers to the President.

What can fantasy football tell us about discrimination in the labour market?

Finally, fantasy sport games, where players select a team of real-life competitors and score points based on their performances, have become increasingly popular across Europe in recent years. However do the data produced by such games offer a basis for research?

Alex Bryson and Arnaud Chevalier, writing at Vox, present an analysis of race-based discrimination in hiring choices based on data from the popular Fantasy Premier League game associated with English Premier League football. The game involves managers selecting a team of 15 players who are all assigned a transfer value based on their performances. The authors argue that this offers an example of a ‘virtual labour market’ and attempt to determine whether the kinds of issues with discrimination that exist in the real labour market also exist in fantasy football. To do this, a player’s ‘productivity’ (i.e. how many points they score for their team) is contrasted with the number of managers who have chosen to select them, leading to the Chart below. 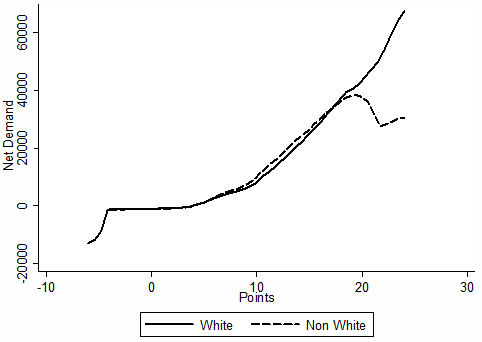 Note: See the full article for a longer description of the figures

As the small dip in non-white players at the right hand side of the Chart is not statistically significant, they conclude that race-based discrimination does not exist to the same extent in the game. They reason that this may be because the ‘productivity measures’ (the points scored by a player) are so effective that there is much less uncertainty over an individual’s worth and therefore less opportunity for discrimination in hiring choices. Ultimately improving the productivity measures available for real employers in the actual labour market may also reduce the potential for discrimination.

Brussels blog round up: Everyone in the EU is under fire, pressure on Europe’s last dictator, and more of the same from Van Rompuy? 25 February – 2 March, 2012

Brussels round up: MH17, Israel-Palestine, and where in the EU are workers most at risk from new technologies?

Brussels blog round up 14 – 20 September: Germany heads to the polls, crisis in Syria, and who should you vote for in next year’s European elections?