Most Europeans value democracy, but do all citizens have the same conception of what democracy is? Pedro C. Magalhães and Besir Ceka assess variations in how Europeans conceive of democracy and analyse the various factors which underpin different interpretations. Their findings indicate that there are a wide variety of conceptions of democracy across Europe. The key mechanism explaining this variation is that individuals in high education and high income groups tend to more readily support the kinds of democracy which represent the ‘status quo’ in their country than citizens from lower education/income groups.

When asked directly in surveys, most people state that they prefer “democracy” to any other form of government, and this holds around the globe. As Inglehart and Norris put it, “In the last decade, democracy has become virtually the only political model with global appeal, no matter what the culture.” What is much less clear, however, is what people really mean by democracy and what explains the different meanings they attach to this ideal.

Our understanding of attitudes toward democracy has deepened in recent years and round 6 of the European Social Survey (ESS) offers a great opportunity to further probe the seemingly ubiquitous support for democracy. This survey includes a carefully designed list of things of what “democracy” might conceivably mean to people, and asks respondents to rate them, on a scale from “not at all important” (0) to “extremely important for democracy in general” (10).

Three main conceptions of democracy emerge from analyses with ESS data conducted by Hanspeter Kriesi, Willem Sarris and Paolo Moncagatta in their forthcoming volume entitled How Europeans View and Evaluate Democracy (in which our investigation is also included). The first is a liberal democratic conception, with two sub-components: liberal (rule of law and individual protection of freedoms and rights from arbitrary decisions by the state and from actions of others) and electoral (free and fair elections and other fundamental aspects of preference formation, aggregation, and choice). The second is a social justice conception that includes the protection of people against poverty and the reduction in income inequality between rich and poor. Finally, there is a direct democracy conception, which incorporates a demand for a direct say in policy-making through the use of referendums and initiatives.

A synoptic analysis of the data, as shown in Figure 1, suggests that, for a large percentage of Europeans, democracy stands for more than just “free and fair elections”. A considerable number of respondents also see, for example, equality before the law or, to a lesser degree, “horizontal accountability” and efforts to protect citizens against poverty as “necessary conditions” for democracy. 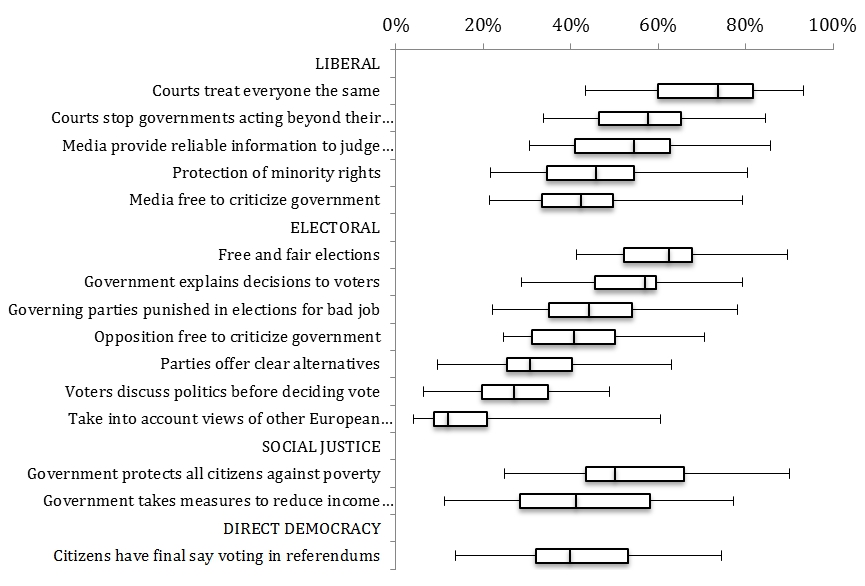 Note: The ‘whiskers’ show the minimum and maximum percentages of citizens rating each aspect as “extremely important” in the 29 European countries included in round 6 of the European Social Survey. The vertical line shows the median response, while the boxes represent the middle 50%.

What explains this variation in the intensity with which individuals espouse different understandings of democracy? Our analyses show that most of the variance in our scales (about 90 per cent) can be attributed to differences between individuals, rather than to country-level differences, and that little is explained by a given country’s experience with democracy or direct democracy, the extent to which it redistributes income between rich and poor, or even the effects of the Great Recession.

In fact, our results show that the extent to which individuals emphasise one or another conception of democracy is fundamentally structured by the social status they enjoy in their societies. Namely, and in line with social dominance theory, high status individuals – both in terms of income and relative education – are more likely to espouse conceptions that are consistent with the political status quo in their countries and to eschew such conceptions of democracy that may constitute a challenge to that status quo.

Figure 2: The effect of a country’s experience with democracy on the extent to which high status individuals think liberal democracy is “extremely important for democracy in general” 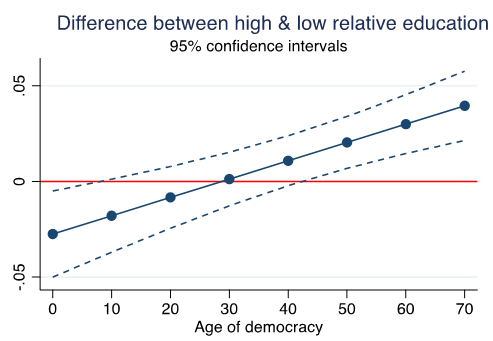 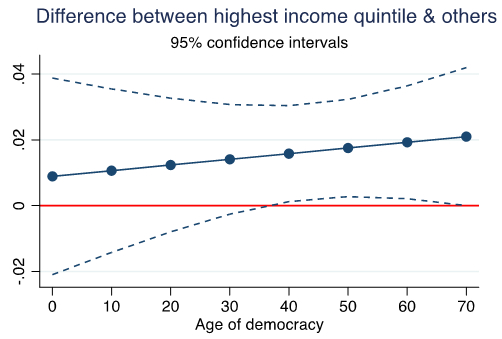 However, and more interestingly, in countries where direct democracy institutions are less institutionalised or non-existent, higher status individuals turn out to be less prone than lower status ones to understand democracy as something that should include referendums and initiatives. Again, members of socially dominant groups do not show any greater inclination to see democracy in terms of institutions that increase opportunities for participation and choice. In fact, when those institutions pose a challenge to the status quo, they have the opposite inclination.

Finally, who sees social justice and redistribution as extremely important for democracy? Obviously, such an understanding should be more prevalent among lower status individuals. As Jim Sidanius (plus co-authors) has argued, “one’s commitment to equality is likely to be related to the social status of one’s group, with members of dominant groups being more resistant to the redistribution of resources.” However, this may also be contingent upon the extent to which welfare regimes, taxation, and transfers promote such redistribution. Where they do not, we should expect high status individuals to be even more reluctant to espouse a view of “democracy” as social justice, which in such a context might comprise a significant change to the status quo.

We estimated the difference between high and low status groups in the extent to which they see protection against poverty and redistribution from rich to poor as central aspects of democracy, but this time contingent upon the level of actual income redistribution in their countries (the difference between the gross and net Gini indexes, from research by Frederick Solt). Although the evidence of an interaction effect is not as strong as in the previous analyses, higher income individuals are less likely to emphasise social justice than lower income ones when the level of income redistribution is very low, while in the high redistribution countries – such as Sweden and Denmark – that difference is not significant. Again, the relationship between social status and understandings of democracy is contingent upon whatever happens to be the status quo.

Different conceptions of democracy imply different institutions and practices, which in turn have distributional consequences, making some people relatively better off and some people worse off. There seems to be no universal positive relationship between prosperity and cognitive empowerment on the one hand, and an increased understanding of democracy in terms of liberal democratic rights and procedures on the other. Instead, what we see is that those who have dominant social positions in society are more likely to espouse conceptions of democracy that are consistent with the political status quo. The meanings that citizens give to democracy reflect societal conflicts about the appropriate design of institutions and policies, with fundamental implications for the foundations of privilege in a given society.

Note: This article gives the views of the authors, and not the position of EUROPP – European Politics and Policy, nor of the London School of Economics. Feature image credit: Mike Hiatt (CC-BY-NC-SA-3.0)

Pedro C. Magalhães – University of Lisbon
Pedro C. Magalhães is a Researcher at the Institute of Social Sciences of the University of Lisbon and Scientific Director at the Francisco Manuel dos Santos Foundation. He does research in public opinion, elections and voting behaviour, and constitutional and judicial politics. He has recently edited a special issue of the Journal of Elections, Public Opinion and Parties on “Financial Crisis, Austerity, and Electoral Politics”.