A ceasefire was agreed between Ukraine and separatist forces on 5 September, although it is unclear whether this will hold following shelling in the city of Mariupol and near Donetsk airport on Sunday. Ellie Knott writes on public opinion within Russia toward the conflict. She notes that while Vladimir Putin’s approval ratings have increased during the Ukraine crisis, there is relatively low public support for the annexation of the regions of Donetsk and Luhansk.

Between the Sochi Olympics in February of 2014 and Russia’s annexation of Crimea in March of 2014, Putin’s approval rating, according to the Levada Centre (a relatively trustworthy source of polling data), shot up to a level of positive approval not seen since before Russia’s economic crisis. Although as Chart 1 shows, Putin’s approval has dipped slightly since June (86 per cent approval) to August (84 per cent), in the wake of the current crisis Putin has become extremely popular once again in Russia, even if optimism about Russia’s economy and personal well-being have not seen the same spikes. 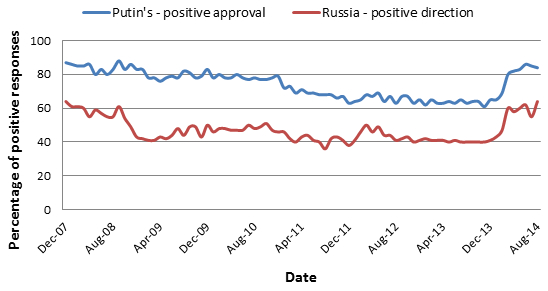 Meanwhile in Ukraine, the conflict in Donetsk and Lugansk has, until the ceasefire on 5 September, continued to escalate. At least 2,200 people within Ukraine have died since April, while the UN report officially that 260,000 have become internally displaced, though the figure is likely to be up to a million due to those staying with relatives not being counted. This also does not include the conservative official estimate of 207,000 Ukrainians who have fled to Russia.

The US and EU remain adamant that Russia is the key instigator of the conflict, by supplying weapons to the separatists, including the BUK missile that shot down MH17. There is increasing evidence also of Russian troops fighting within Ukraine. Mark Galeotti, an NYU professor and expert in Russian security, has identified the tell-tale signs of Russian troops in Ukraine via their white armbands, which is a common identifier used by Russian forces. Secondly there have been increasing stories reported by Russian print media of the bodies of Russian soldiers arriving back to Russia having died in combat in Eastern Ukraine.

However, one of the successes of Putin’s campaign to destabilise Ukraine in the wake of the Euromaidan has been to operate a campaign of subterfuge which denies Russia’s direct and indirect involvement. Within Russia, this campaign continues to be relatively successful. As data from the Levada Centre shows, the majority of Russians surveyed believe the Russian administration is neither responsible for the deaths in Eastern Ukraine (Chart 2) nor is there currently a war between Russia and Ukraine (Chart 3).

Crucially, these numbers have stayed relatively constant over time (between April and August) while conflict in Donetsk and Lugansk has intensified. Moreover a majority of Russians, who overwhelmingly follow Ukrainian events via TV and not via print media, still believe that Russian media provides an objective picture of events in Ukraine.

Chart 2: Responses in Russia to the question: “Do you think Russia is responsible for the bloodshed/deaths in Eastern Ukraine?” 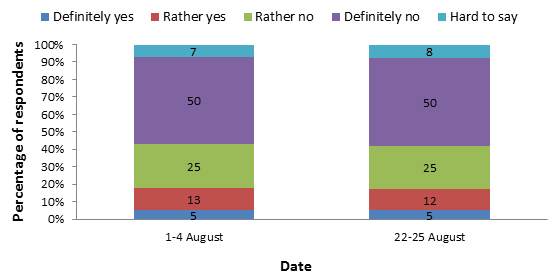 Chart 3: Responses in Russia to the question: “Do you agree that there’s a war going on between Russia and Ukraine?” 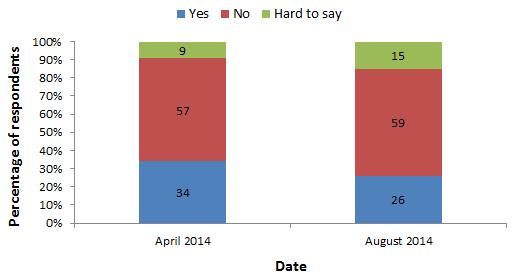 Yet some interesting findings are evident when delving further into the polling data. Firstly, a reasonable number agree that Russia should support the “pro-Russian (Rossiisskiy) forces in Ukraine” but this has actually decreased as the situation in Eastern Ukraine has intensified, as shown in Chart 4. Secondly Russians polled were far less supportive of open war between Ukraine and Russia, and this support has declined substantially in the last few months, as shown in Chart 5. Lastly, as shown in Chart 6, it’s clear that a majority of Russians do not favour Russia’s annexation of Eastern Ukraine, and this opinion has increased as fighting has intensified. This compares starkly to the overwhelming support of Russia’s annexation of Crimea, when Levada conducted a poll back in April 2014, as shown in Chart 7.

Chart 4: Responses in Russia to the question: “Do you think that Russia should actively support the pro-Russian forces in Eastern Ukraine?” 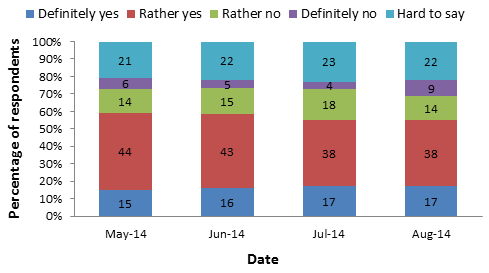 Chart 5: Responses in Russia to the question: “Would you support the leadership of Russia in an open military conflict between Russia and Ukraine?” 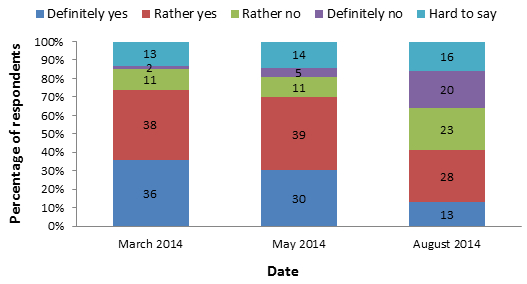 Chart 6: Responses in Russia to the question: “What do you think about the political future of Eastern Ukraine? Which of the following would you prefer?” 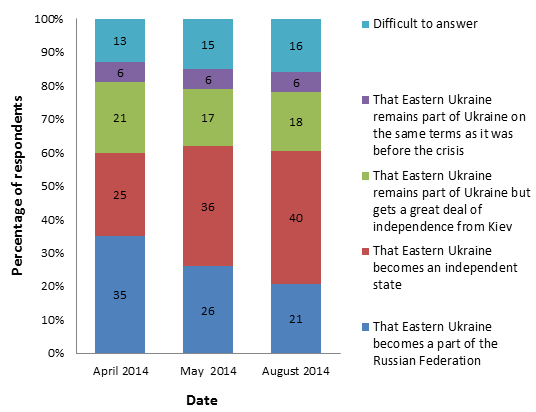 Chart 7: Responses in Russia to the question: “Generally speaking, do you support the current actions of Russia to support the annexation of Crimea?” 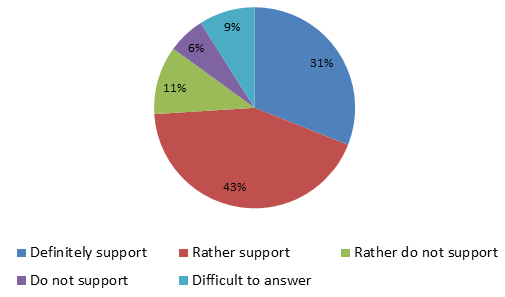 For now a ceasefire has been agreed, where Ukraine and the separatist forces have agreed to withdraw troops and cease fighting. It is difficult to anticipate whether this agreement will hold with relations remaining extremely tense and suggestion that fighting re-started in the days after the 5 September agreement. Assuming a ceasefire were to hold, there is still a high degree of uncertainty concerning what comes next: with options ranging from renewed fighting, the creation of new de facto state(s) in Donetsk and Lugansk (the preferred option of Russian public opinion) or the federalisation of Ukraine, which retains Donetsk and Lugansk regions, but gives them greater autonomy than before.

Here, I would argue, that federalisation is now the best option, even if this was Russia’s preferred option several months ago. There does not appear to be any superior options right now given that Russia would continue to pump soldiers and weapons into Ukraine should Ukraine decide to continue its operation to remove separatists from these regions. However, this assumes naively that separatists can both be controlled directly from Russia and would not continue to fight to achieve independence.

Hence there remains a clear paradox. A ceasefire is clearly in Russia’s interests, with sanctions continuing to damage Russia’s economy, and a lack of popular support for annexation. Russians are already realising that, in a fragile economy, inheriting Crimea was costly enough and inheriting Donetsk and Lugansk would incur even more costs, not least because of the sheer destruction that fighting has caused and because of the further sanctions Russia would incur as a result. At the same time a ceasefire that does include an admission of direct involvement from Russia remains extremely fragile and requires a concerted effort on the part of Ukraine to realise that the best solution, of federalisation and neutrality as regards to NATO, may not be their preferred solution, but right now offers Ukraine the best chance of being able to put the state back together.

Note: This article gives the views of the author, and not the position of EUROPP – European Politics and Policy, nor of the London School of Economics. Feature image: Ukraine President Petro Poroshenko, Credit: European External Action Service (CC-BY-SA-ND-NC-3.0)

The EU’s latest sanctions against Russia: the legal basis and how they will work in practice