Sweden held a general election on 14 September, with the Swedish Social Democratic Party emerging as the largest party ahead of incumbent Prime Minister Fredrik Reinfeldt’s Moderate Party. Katrine Kielos outlines the five key reasons why Reinfeldt suffered at the polls, noting that most of the support lost by his centre-right coalition went to the far-right Sweden Democrats.

On 14 September, after losing almost a quarter of his support in the Swedish general election, Fredrik Reinfeldt announced his resignation – not just as Prime Minister, but also as leader of his party, Moderaterna (the Moderate Party). Why did this happen? There are at least five explanations.

What has made Fredrik Reinfeldt different from previous Swedish centre-right leaders has been that he proposed tax cuts – not in order to make the Swedish welfare state smaller, but in order to create jobs. He found a way to cut taxes without being seen as someone who wanted to get rid of the Swedish model.

The problem he encountered this year was that he has not managed to get unemployment down (it was 5 per cent when he took over as prime minister and 8 per cent eight years later). His two governments have lowered taxes by around 140 billion Swedish Krona, a record breaking amount, but the jobs that these tax cuts were supposed to create have not emerged.

The other part of Reinfeldt’s economic message has relied on supply-side reforms aimed at reducing unemployment and sick leave benefits. These were controversial from the start. The longer Fredrik Reinfeldt has governed the more voters have started to feel that Sweden has indeed been moving away from a social democratic model. The country has seen the biggest surge in inequality of any OECD country over the past 15 years and Fredrik Reinfeldt has been blamed for this development.

The centre-right lost out to the far-right

Sweden’s new Prime Minister will be Stefan Löfven, the leader of the Social Democrats, but the biggest winners of the election were not Löfven’s party, but the Sweden Democrats. As shown in the table below, this far-right party with roots in the neo-nazi movement has risen from the fringes to become Sweden’s third largest party. They were also the main reason that Fredrik Reinfeldt lost power: every third person who voted for them had previously supported Reinfeldt’s coalition. 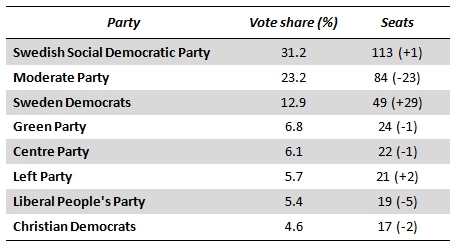 The paradox is that this wasn’t an election about immigration. When voters were asked to rank the issues they most cared about, immigration didn’t even make it into the top ten, but for the group that vote for the Sweden Democrats immigration is the single most important issue.

Fredrik Reinfeldt has been unusual among centre-right leaders in Europe in the way that he has not adopted xenophobic rhetoric, but instead tried to stand up for an open and tolerant society. The way he has done this has however been criticised. Many people on the left argue that the increase in inequality that Sweden has seen is part of the explanation for the dramatic increase in support for the far-right.

The Social Democrats (sort of) got their act together

Stefan Löfven, who will become Sweden’s next Prime Minister, inherited a Social Democrat party in deep crisis in 2012. He managed to unite it and give it some form of direction. The 57-year-old who has never been a member of parliament before is a former steel worker and union leader.

His core economic message has been that making unemployed people poorer does not create jobs – successful businesses do. He has been calling for a better dialogue between business and government and a new emphasis on industrial policy. He has nevertheless been criticised for not having enough concrete policies and for not performing very well in the TV-debates.

His supporters believe that given the state the party was in when he took over, he has still done a decent job. The Social Democrats were the only party other than the far right who increased their support – albeit only by a fraction. Stefan Löfven will now have to govern in some form of coalition government, probably together with the Greens.

Sweden has been experiencing a ‘Pisa-shock’

The OECD’s Programme for International Student Assessment (Pisa) survey presented last year sent shock-waves through Sweden. No other country has fallen so abruptly in mathematics over a ten-year span. Sweden is now below the OECD average in maths, reading comprehension, and natural sciences. Its schools rank below both the United States and the UK and it was perhaps no wonder that voters cited education and school performance as their number one concern in the election

The Social Democrats are perceived to be the party with the best policies on education and this probably benefitted them. In the last 20 years the amount of free schools has exploded in Sweden. One in ten children today are attending a free school and one in five of these schools are controlled by private equity. This was not the intention of the reform and anger has been mounting.

Sweden has seen a tremendous grade inflation in recent years and researchers claim that many free schools give students higher grades than they deserve in order to boost the ”competiveness” of their respective school. Schools also lure students with free iPads and fancy computers and spend money on huge advertising campaigns; this is controversial since it is literally taxpayer’s money that is being used. The social democratic party were arguing for stronger regulations, increased transparency, and tougher demands on these schools, policies that will now probably become reality.

The war in eastern Ukraine didn’t impact on the Swedish election directly, but might have played an indirect part. Sweden is just on the other side of the sea from the Baltic States and views this region as very important. Carl Bildt, the Foreign Minister, has made a big name for himself in Europe as a very outspoken critic of Vladimir Putin. But while Carl Bildt has been flying around the world warning about Russian aggression, Fredrik Reinfeldt has been cutting defence spending at home.

In 2007, the government announced defence cuts of ten per cent and in 2010 Fredrik Reinfeldt went ahead with his plans of ending conscription. The impact this has had on Swedish defence has outraged many of Reinfeldt’s traditional conservative voters, with the Swedish Supreme Commander famously stating that the country can now ‘only defend itself for one week’. Alongside the other reasons above, this likely played a part in his poor election performance.

Note: This article gives the views of the author, and not the position of EUROPP – European Politics and Policy, nor of the London School of Economics. Featured image: Fredrik Reinfeldt, Credit: European People’s Party (CC-BY-SA-ND-NC-3.0)