Is EU foreign policy genuinely influenced by humanitarian concerns or are such claims merely used to add legitimacy to traditional power politics? Joakim Kreutz uses data on EU foreign policy actions between 1989 and 2008 to assess the extent to which human rights concerns have played a role in decisions to intervene abroad. He finds a correlation between humanitarian atrocities and EU interventions; however this effect is strongly influenced by the geographic region in which atrocities take place. Overall, the EU appears most sensitive to human rights abuses within non-EU countries in Europe, followed by sub-Saharan Africa and East Asia.

What is the basis for the foreign policy of the European Union? This has been debated by scholars and policymakers ever since the Copenhagen declaration in 1973 suggested a European foreign policy based on norms and values rather than power and realpolitik. While some argue that the EU has been committed ever since to normative goals such as the protection of human rights, critics claim that the humanitarian rhetoric is used to justify traditional geopolitics.

In a recent article, I provide the first systematic investigation of whether EU foreign policy activity is aimed against humanitarian atrocities using global information on EU sanctions, peacekeeping, and military actions between 1989 and 2008. My findings show that EU action is consistently more likely in countries where violence explicitly targets civilians. This effect is visible already at relatively low levels of violence, with an increased probability of EU action statistically significant when around 30 fatalities are reported in a year. Thus, the EU is not only responding to excessively violent situations like in the former Yugoslavia or Rwanda, but is sensitive to low-level humanitarian atrocities.

A challenge in studying EU foreign policy consists of defining the universe of events that constitute EU action. First, should only joint measures be included or are member state unilateral actions also part of European foreign policy? Second, it is necessary to determine what type of actions should be covered as the EU can draw on different instruments including military intervention and warring party support, peace operations, sanctions, mediation, special representatives, conditionality agreements, and trade preferences. Following convention in the international relations literature, I limit my analysis to efforts of military or economic intervention, while I explore both a narrow indicator of EU action consisting of joint measures only and a wide measure that also includes member state actions. The latter measure provides global data distributed as shown in Chart 1. 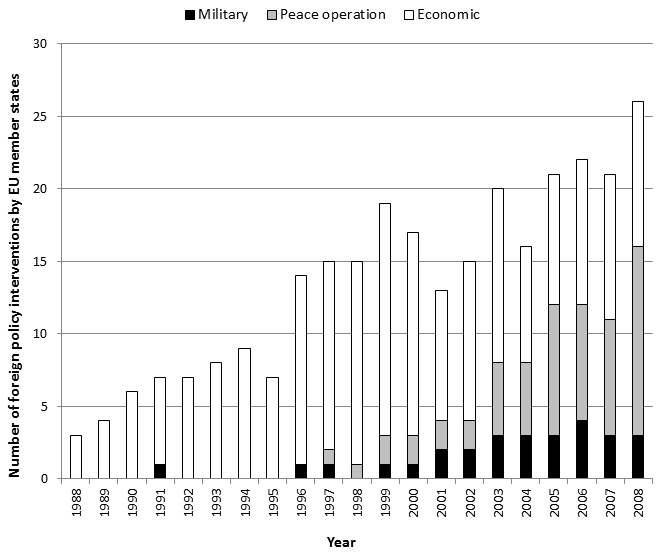 It is worth noting that the study covers the time period prior to the presence of a High Representative for Foreign Affairs and Security Policy, and still offers sufficient empirical evidence on EU foreign policy action. The analysis contributes to one of the most contested claims about the nature of the EU: the role of human rights as a determinant of foreign policy. Whereas existing research into this issue has focused on policy documents or explored only the cases of EU action, a full understanding of foreign policy priorities can only be achieved by systematically comparing these with the instances where there are human rights abuses but no EU response.

Geography and the EU’s response to human rights violations

Human rights can be violated in many different ways, ranging from withholding certain rights on an individual basis to mass murder of civilians. Focusing on visible and severe atrocities, I use data on government’s respect for citizens’ physical integrity as well as the number of fatalities from civilian killings. Following straight-forward comparisons across countries, I find that EU action is more likely toward countries that on average are worse human rights offenders, as well as specifically in the years where abuse is particularly prevalent.

However, the criticism from scholars and policymakers against the notion that the EU acts as a normative humanitarian foreign policy actor suggests a more complex relationship. They commonly acknowledge that human rights are important, but suggest that other factors influence the selection of cases where the EU applies its humanitarian actions. In particular, it has been argued that geostrategic considerations influence the EU’s overall strategy, as well as its policies on democracy promotion, counterterrorism, development aid, and sanctions.

When the figures are examined, there is an obvious geographical variation regarding where EU troops and sanctions have been used, as indicated by Chart 2. The different regions are coded in accordance with the categorisations used by the EU, which are outlined in the 1993 Copenhagen criteria, 1995 Barcelona declaration, and 2004 near neighbourhood strategy. Most EU attention has been aimed towards countries in Europe that are eligible for seeking membership of the EU, but this is followed by actions in sub-Saharan Africa and East Asia rather than regions in closer geographic proximity. 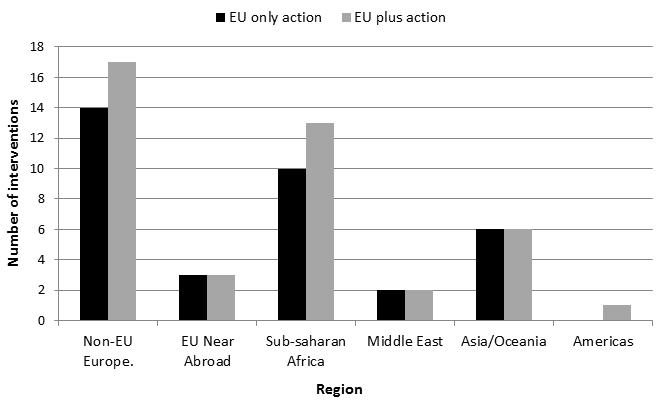 To explore how these geographical patterns influence the EU’s concern over human rights, I employ a multi-level model that simultaneously accounts for between-region variations and the likelihood that human rights abuse is followed by EU action. The findings from this analysis show that there is a consistent increased likelihood in the EU deploying troops or imposing sanctions toward countries in the aftermath of humanitarian atrocities. However, geography influences the strength of this effect.

To illustrate my findings, I develop a hypothetical scenario based on the case of Egypt during the Arab spring where I manipulate the regional location of the ‘country’ and the severity of human rights abuse. If the low estimate of 135 protesters are killed in a country similar to real-life Egypt in late 2010 and located in the EU’s ‘near abroad’, then the predicted probability of EU military intervention or sanctions increases by at least 0.2 per cent. If the country instead was located in sub-Saharan Africa, then the predicted probability increase would be at least 1.7 per cent. These differences may seem small, but it is important to remember that this analysis focuses on the rare event of the beginning of EU action within twenty years of global data.

Across my analyses, where I also contrast EU action to efforts involving the United States and the United Nations, the particular sensitivity to human rights violations in sub-Saharan Africa consistently stands out. One possible explanation for this is the long history of common EU policy towards this region, including the promotion of human rights. The 1957 Treaty of Rome included provisions for African colonies to access the internal market while aid became partly coordinated through the European Overseas Development Fund. Furthermore, the first international agreement signed by the EU was the 1963 Yaoundé Convention, and subsequent follow-up agreements have promoted the formation of the African Union as well as, in the 1990 Lomé Convention, introduced human rights conditionality clauses. Thus, my findings on the EU’s use of costly measures like military intervention and economic sanctions show a similar pattern as EU efforts conceptualised as “carrots” rather than “sticks”, and both put a large emphasis on the protection of human rights.

Note: This article gives the views of the author, and not the position of EUROPP – European Politics and Policy, nor of the London School of Economics. Featured image: Danish forces during a training exercise, Credit: 7thArmyJMTC (CC-BY-SA-3.0)