How do European citizens receive information about the policies and activities of the European Union? Laura Sudulich presents research on the impact of different types of online materials on levels of public knowledge about the EU. She notes that only platforms which host reliable, fact-checked information tend to be effective in increasing knowledge, with websites associated with traditional media organisations or institutions being most successful.

The quality and availability of relevant information is vital to citizens’ capacity to learn about politics, their ability to link political preferences to parties and assess the performances of institutions and political actors. In most instances, people gather politically relevant information via the mass media rather than through direct interactions with political elites.

When considered in relation to the formation of opinions, the gathering of political awareness, and voting behaviour in the context of the European Union, the mass media are key actors. European citizens typically do not experience any direct contact with EU level institutions. Thus, they forcefully rely on mass media when forming their opinions about the EU. Additionally, widespread ignorance concerning EU politics and policies among members of the European public is notorious and persistent.

Online platforms and knowledge of the European Union

In a working paper co-authored with Leonardo Baccini, we take the first step toward addressing whether consuming online information about the EU is responsible for variation in public opinion towards it and if this process bypasses or encompasses political knowledge. The internet provides a potentially unlimited amount of information. It also offers an array of heterogeneous sources, from credible news producers to user-generated content, whose quality and reliability are highly diverse. With traditional media, publishers and regulatory authorities act as gatekeepers on what can be broadcast or printed, while media editors, through the process of indexing, select what is relevant for the public to know.

These boundaries only apply to certain spaces online, as the very notion of information producers has changed. Next to traditional news producers, a multiplicity of actors now publish information that is available to a potentially very large number of internet users. Bloggers, citizen-journalists, and audio-visual producers constantly upload information that can instantly spread, by sharing via social-networking sites, blogs and micro-blogs. As a consequence of the dramatically changed structure of information production, online spaces vary dramatically in the heterogeneity of their content and in the extent to which they host unverified versus verified facts.

For instance, the website of a major newspaper is likely to publish content that is vetted and has been provided by accredited sources. At the other end of the spectrum, platforms like blogs and forums are, by definition, aggregators of comments and opinions. Moreover, user-created content is prominent on popular platforms like Facebook and Twitter. Therefore, users can be exposed to a myriad of different pieces of information that may or may not translate into politically relevant knowledge. In general, the information we acquire via the mass media can translate into in-depth knowledge, superficial acquaintance or even result in no discernible knowledge as a function of being unclear, noisy or redundant.

While absorbing redundant information is a possibility when gathering information via any media, the internet maximises potential for amplification of noise by creating an environment where noise and signal are often indistinguishable. Therefore we separately analyse the effects of platforms that hold strong potential for the amplification of noise (‘Online social networks’ or ‘Blogs’ or ‘Video hosting websites’ labelled Miscellaneous Websites) from those that are most likely to maximise fact-checked information (‘Traditional media websites’, ‘Institutional and Official websites’ labelled Fact-checked Websites), to gather a more fine-grained understanding of how the new media affect individuals’ opinions and if that happens via enhanced levels of political knowledge. The Chart below shows the average distribution of what respondents indicated to be their first online source of information on EU level matters. 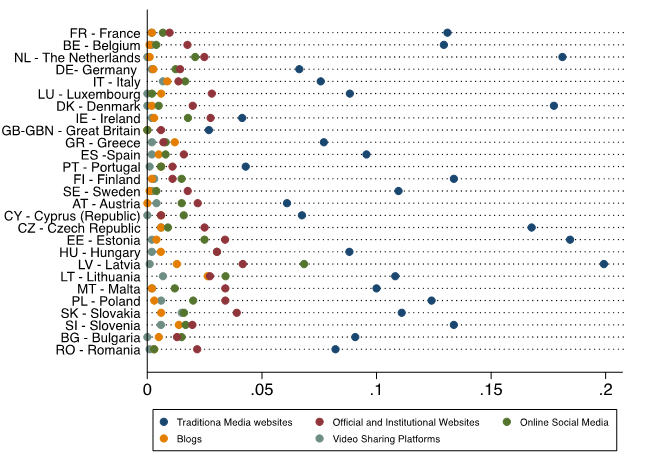 Note: The research includes all current EU Member States with the exception of Croatia (due to the time of the fieldwork).

The take-home message from this figure is that at the time of fieldwork the websites of traditional media outlets were by far the most visited platforms in every country. The second most preferred platforms to gather information on EU matters were institutional and official websites, while the use of blogs, onlinesocial networksand video hosting websiteswas very limited across the entire sample.

Analytically we implement a causal mediation analysis model, which allows us to distinguish the direct effect of online information consumption on public attitudes toward the European Union from its mediated effect through increases in knowledge of EU matters. Our findings indicate that online platforms differ in their capacity to affect both public opinion and public knowledge concerning the European Union.

Those who search for information on European matters on the websites of traditional media or on institutional websites are more positive towards the EU, and this happens via increased levels of knowledge of the Union. Those who perform a similar search in spaces that contain miscellaneous information do not experience changes in attitudes nor do they appear to learn from them. This may be due to the difficulties that users experience in separating the signal from the noise when the two are simultaneously consumed.

Traditional media dedicate relatively little attention to European matters, particularly in routine periods. While the emergence of a European public sphere is highly desirable, we have not yet seen this occur. A global, transnational, multilingual medium like the internet carries the potential to supply all the information Europeans need and often do not find on traditional media. However, our results indicate that only platforms that host well-vetted information tend to be effective in increasing knowledge and influencing opinions. Platforms that aggregate miscellaneous information do not appear to be effective at transmitting knowledge nor at impacting citizens’ evaluations of the European Union.

Note: This article is provided by our sister site, Democratic Audit, and gives the views of the author, and not the position of EUROPP – European Politics and Policy, nor of the London School of Economics. Featured image credit: Jim Killock (CC-BY-SA-3.0)