Figures released on 27 November showed that net migration to the UK in the year to June had risen to 260,000 people. With David Cameron having previously announced a goal of cutting net migration to below 100,000 per year by the time of the 2015 general election, the figures have once again pushed the issue of immigration to the centre of the UK’s political agenda, but what do the British public really think about immigration? Bobby Duffy highlights ten significant findings based on Ipsos MORI polling on the subject. He writes that the data shows there are deep concerns about immigration across large parts of the British population, but that the picture is far more nuanced than commonly recognised.

Immigration is one of most frequently covered issues in opinion surveys. With this wealth of data, we should have a clear view of public attitudes, but in practice, questions often seem designed to create more heat than light. From our year-long review of all attitudinal data, the overall picture is one of genuine concern about immigration among a large proportion of the population – but more nuance on specifics, and a number of important gaps between perceptions and reality. Ten key points are worth highlighting:

First, numbers matter. The surge in concern about immigration in the early 2000s followed, rather than preceded, the increase in immigrant numbers, as Chart 1 below shows. In fact, there was a lag: it took a while for the public to notice.

However, many other measures of concern about immigration have relatively little relationship with changes in immigration levels. For example, agreement that there are “too many immigrants” was 63 per cent in 1989 when immigration was barely registering on questions on the most important issues facing the country, as Chart 2 shows.

Chart 2: Immigration as an important issue compared with trend in proportion of the British public who agree that there are too many immigrants in the UK

2. There are a number of ‘perception gaps’ on immigration

The public have a very poor understanding of the scale and nature of immigration. Surveys regularly show we think between a quarter and third of the population are immigrants – when the actual figures are closer to 13 per cent. And these misperceptions extend to our view of the make-up of immigrants. The most mentioned are refugees or asylum-seekers, despite these being the least common immigrant type. The least mentioned group are people who come here to study, when in fact students were the largest category of migrant to the UK in 2011.

Chart 4: Immigration as a problem in Britain and the local area

3. There are very different views about different types of immigration

When we look at views of specific immigrant groups there is much more variation. These show that immigrants’ labour market position, skill level, likelihood of drawing on state resources, their country of origin, their ethnicity, length of stay and legality all affect how we view them. For example, research has shown that when migrants are described as professionals, net support for settlement in the UK is positive, regardless of the migrants’ origin or motive for migrating (whether to fill a job or search for work). When migrants were described as unskilled labourers, net support is negative, in each combination with region and motive, as shown in Chart 5.

4. Immigration was a class issue

5. Immigration is now more of a generational issue

In contrast, a clear generational gap has started to open up: by 2013, the generation born pre-1945 were nearly twice as likely as generation Y (born 1980-2000) to consider immigration a problem.

6. Where we live matters

Areas with the lowest immigrant numbers often express the greatest concern about immigration. So, for example, in the 10 per cent least ethnically diverse wards, the proportion of the White British population who think that immigration should be “reduced a lot” is 64 per cent. This falls steadily as ethnic diversity rises, so that in the 10 per cent of most diverse wards the equivalent “reduced a lot” figure is 44 per cent. However, the White British population living in “asylum dispersal areas” are the most likely to want immigration significantly reduced, as Chart 8 below shows.

7. Immigrants worry about immigration too

The attitudes of immigrants themselves towards reducing immigration also shift over time – coming closer to the average for the UK population the longer they have been in the country, as Chart 9 shows. This is likely to be a function of both length of time in the UK and the different types of immigrants that arrived during these periods.

8. The newspaper we read says a lot about our attitudes to immigration

Newspaper readership provides one of the widest ranges in levels of concern of any single characteristic: in 2013, 52 per cent of Express readers said that immigration was one of the most important issues facing the country, compared with only 14 per cent of Guardian readers. Of course this doesn’t prove a causal effect – and this is just about impossible to fully unpick.

Chart 10: Answers by newspaper readership to the question: “What would you say is the most important issue/other important issues facing Britain today?”

9. The UK population likes immigration targets, but has little faith in them

Around eight in ten of the population have agreed that the government should set strict limits on the number of immigrants since we started asking this question back in 2006. It is no surprise then that there is similarly widespread support (from around 80 per cent) for the government’s current pledge to reduce net migration to “tens of thousands”. But it is also clear that people (increasingly) doubt the government will be able deliver this, as Chart 11 shows.

Chart 11: Support for David Cameron’s immigration pledge and assessment of likelihood of meeting this pledge by party 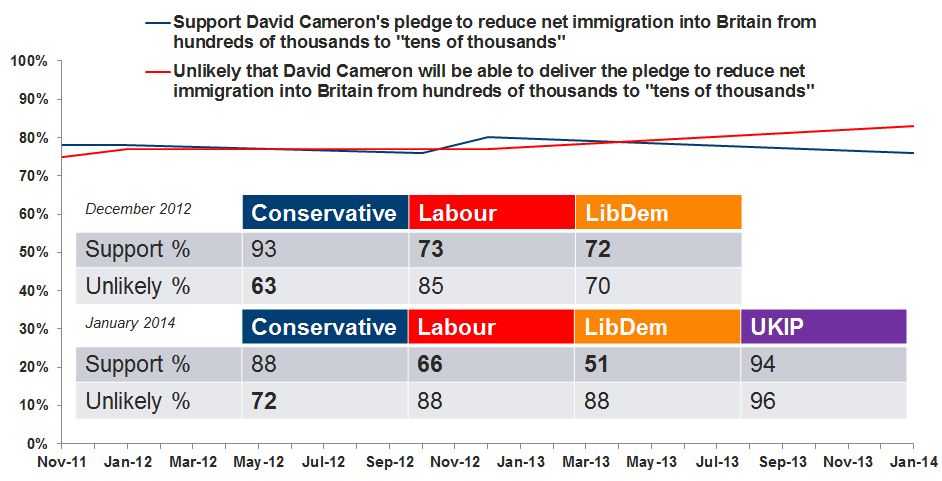 10. UKIP has broken away

There are broader signs that immigration is becoming a more polarising issue. In particular, the proportion saying we’re discussing immigration “too much” has more than doubled in the last three years, as Chart 13 shows.

Chart 13: Answers by party to the question: “Generally speaking, do you think that the issue of immigration has been discussed in Britain too much, too little, or about the right amount over the last few years?”

It should be easy to accept that there is deep concern about immigration in general across large parts of the population, while also recognising that there is more nuance in specific views. But it is much more difficult for politicians to communicate that. Trust is so low among so many, with the default position that the political classes do not understand people’s concerns, that any sign of playing back a nuanced case risks being seen as not taking the issue seriously enough. It is therefore very difficult to have a conversation that does not end up fuelling concern and the misperceptions that are clear in the attitudinal data.

It seems very likely then that immigration will become more divisive in the coming months. In some sense, it has been strangely unifying, as even those at the more sympathetic end of the spectrum often agreed it has not been treated seriously enough. But as the discussion continues, differences in views are being brought into starker relief. And, as we have seen, not only is there a growing polarisation in attitudes, the groups that are most different from each other have very different current and future electoral weight. In particular, there is a strong generational basis to concern about immigration, with the oldest most concerned – and most likely to vote. But they are also dying out, and being replaced by a much less concerned cohort.

But that reaches way beyond the current electoral cycle, and remains uncertain. The current political response to concern about immigration and the rise of UKIP specifically – more restrictive rhetoric and policy across parties – seems set to continue. The potential loss of future voters will count for little in the intense fight for every current vote in the coming months.

Note: This article is provided by our sister site, British Politics and Policy at LSE, and gives the views of the author, not the position of EUROPP – European Politics and Policy, nor of the London School of Economics. Featured image credit: The Open University (CC-BY-SA-ND-NC-3.0)