The Greek parliament is holding a series of votes on electing the country’s next President. Although the position of President is largely ceremonial, the issue has created political uncertainty due to the present government lacking the required support to elect their designated candidate. Should they fail to appoint a new President by 29 December, the Greek constitution states that new parliamentary elections must be held, which could potentially be won by the left-wing opposition party Syriza. Eri Bertsou writes that with the government’s success far from assured, the vote could have far-reaching consequences for Greece and the Eurozone.

Greek MPs are currently in the process of deciding whether to elect a new President. The Prime Minister, Antonis Samaras, brought forward the date of the election, which was originally scheduled to be completed by 23 February, after no conclusion was reached with the EU and the IMF on Greece’s review and future reform programme. The President of the Hellenic Republic is mainly a ceremonial role, however the news caused panic in financial markets, with the Athens Stock Exchange dropping 20 per cent and 10-year Government Bond yields surpassing 9 per cent.

The reasons for the market sell-off are mainly political, and not economic. According to the Constitution, a failure of Greek legislators to elect a President after three rounds of voting would result in the dissolution of Parliament and a call for fresh legislative elections. Left-wing opposition party Syriza is currently ahead of New Democracy in voting intention polls by 3-5 percentage points, meaning that, in the event of a new legislative election in January or February 2015, a new left-wing Syriza government could be put into place. Of course, it is hard to speculate at this stage whether the first party will win a majority of the seats or whether there will be a need for further negotiations and coalition building between political parties.

Nevertheless, the uncertainty of the next few weeks has caused bigger questions regarding the country’s reform progress and future direction to appear in the international press. It is therefore useful to take a closer look at the electoral process about to take off and the potential outcomes.

The election of the President of the Hellenic Republic

According to Article 140 of the Hellenic Parliament Regulation, voting for the election of the President of the Republic will commence by a roll call in the Greek Parliament. Mr Stavros Dimas, a former EU commissioner and former minister, has been nominated for the post by New Democracy and parliamentarians can either vote in favour of his election or simply declare ‘present’.

In the first round of the election, the candidate needs to gather 200 votes to be elected. As the required number of votes was not reached, a second vote is scheduled for 23 December. In the event that the required number of votes is again not reached on the second vote, a third vote is scheduled for 29 December, where the number of total votes needed for the election of the President is reduced to 180 (three fifths of the parliamentary seats). If the candidacy does not gather 180 votes on 29 December, a new general election needs to be called within 10 days.

Currently, the governing coalition of New Democracy and Pasok hold 155 seats in Parliament and the Prime Minister is in search of the remaining 25 votes. Among the 24 independent parliamentarians, 7 have declared their intention to vote for Mr Dimas, although there are some parliamentarians who have implied they will only vote in the third round, if it means avoiding new general elections. In the run up to the vote this has been an intense numbers game, and it is still unclear whether the ultimate requirement of 180 votes for Mr Dimas’ candidacy is feasible or not.

The aftermath of the presidential election

If the election of the President is successful, Samaras’ gamble will have paid off and he should be able to conclude the review and secure a new agreement with the Troika for Greece in 2015. However, if parliamentarians fail to elect a President, new legislative elections will need to be scheduled in the New Year, with 25 January or 1 February already mentioned as possible dates. Voting intention polls consistently show Syriza ahead of New Democracy, although the difference has narrowed after the expedition of the Presidential election process.

A public opinion poll conducted for a major evening news network the week prior and the week following the announcement, shows Syriza’s lead shifted from 4 percentage points to 3.2 points. Still, with 9.9 per cent of respondents intending to vote for smaller parties unlikely to reach the 3 per cent threshold, and 21.4 per cent of undecided respondents, any discussion of possible general election results can only proceed with caution. Commentators should bear in mind that translating potential total votes in the general election into potential seat allocations in the Parliament is challenging in the context of Greek parliamentary elections.

Chart: Predicted vote share for Greek political parties before and after the announcement of the new date for presidential elections 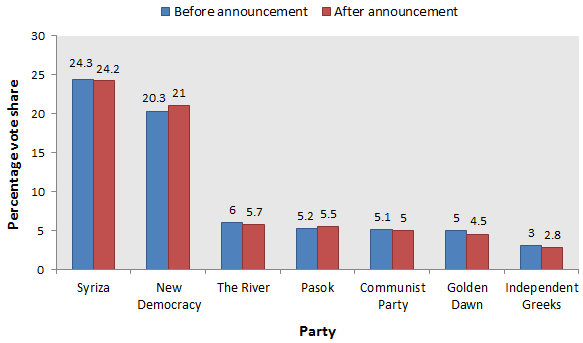 Note: Only parties which had 3 per cent or higher in either of the polls are shown. Support for other parties stood at 9.9 per cent in the second poll, while 21.4 per cent of respondents indicated they were unsure who they would vote for. For more information on the political parties see: Coalition of the Radical Left – Unitary Social Front (Syriza); New Democracy; The River (To Potami); Panhellenic Socialist Movement (Pasok); Communist Party of Greece (KKE); Golden Dawn; Independent Greeks. Source: Mega TV

What appears to be clear is the stance of the Greek people, a majority of whom indicate they do not wish for a new general election to be held (61.6 per cent, as opposed to 36.3 per cent of respondents polled). Overall, citizens are wary of the political uncertainty and are looking for assurances that gains achieved through the painful reforms over the past years will not be jeopardised.

Such assurances are hard to find, and the recent interventions from technocrats and EU officials are effectively providing more fuel for the already tense political atmosphere in Greece. Greek people appear to be fully aware of the difficult decisions still lying ahead for the country. It is telling that another poll registers that the majority of citizens feel failing to elect a President will be a negative development for the Greek economy and society, yet an equal majority believes this will be the most likely outcome of the voting process.

There is no doubt that the presidential vote will be monitored closely by people all around Greece, as well as abroad by European and International commentators. With the financial markets pricing in this first wave of uncertainty, the voting process has important implications for the political developments in Greece, the future of the country’s relationship with the EU and the Troika, and, therefore, the European recovery project and European democracy as a whole.

Note: This article gives the views of the author, and not the position of EUROPP – European Politics and Policy, nor of the London School of Economics. Featured image credit: European People’s Party (CC-BY-SA-ND-NC-3.0)

Eri Bertsou – LSE Government
Eri Bertsou is a PhD Candidate in the Department of Government at the LSE conducting research in political behaviour in Europe. She holds a BA in Philosophy and Literature from the University of Warwick, an MSc in Political Communication from the London School of Economics and has professional experience in international financial markets.