Slovakia held a referendum on 7 February aimed at prohibiting same-sex marriage, adoption by same-sex couples, and the right of schools to require children to attend sexual education, or education dealing with the subject of euthanasia. Daniel Kral writes on the impact of the referendum, which saw overwhelming backing for all three proposals, but failed to pass the 50 per cent turnout threshold needed to make the result binding. He argues that despite the controversial nature of the topic, the result illustrates that democracy is still alive and well in the country, and could lead Slovakia in a more socially liberal direction.

On 7 February, Slovakia held its eighth referendum since becoming independent in 1993. Given that only one plebiscite – on joining the EU – had ever passed the constitutional threshold of a 50 per cent turnout, which is required for the result to be valid, it wasn’t particularly surprising that the most recent one failed to attract sufficient numbers. Organised by a civic organisation called ‘Alliance for the Family’, the referendum comprised three highly socially sensitive questions:

1. Do you agree that no other partnership than that between a man and woman shall be called marriage?

2. Do you agree that same-sex couples, or same-sex groups of people, should not be allowed to adopt children?

3. Do you agree that schools cannot require children to participate in education pertaining to sexual behaviour or euthanasia if the children or their parents don’t agree?

A fourth question – interpreted by the constitutional court as infringing upon the fundamental rights of citizens from the LGBT community guaranteed by the Slovak constitution – was rejected from appearing on the ballot.

A campaign of silence

One particularly notable factor in the run-up to the referendum was the overriding silence of high officials and political parties on the issue. Ahead of the vote, former Slovakian Prime Minister, Iveta Radičová, claimed that it has brought ‘only conflict within society’ and serves ‘to resolve nothing’. Slovakia’s current President, Andrej Kiska, gave the impression that in calling the plebiscite – after the Alliance presented the required 400,000 signatures – he was, rather unenthusiastically, merely performing his presidential duties. Despite the insistence of the media, many leading figures have refused to disclose their opinion on the issue.

From among political parties, only the Christian Democrats, who are the largest opposition party in parliament, and Richard Sulík’s Freedom and Solidarity came out as strongly for and against, respectively. The referendum presented a dilemma for the ruling leftist-populist Smer-SD, which portrays itself as a standard centre-left party. Although it was mainly the social-democratic forces in Western Europe that took on the plight of the LGBT community, Smer’s PR machinery has been all too wary of alienating large parts of the traditionally socially conservative Slovak electorate. In the end, remaining largely silent on the topic emerged as the best option for the party.

It was the various churches – Catholic in particular – that became committed to recruiting the electorate to go and vote ‘three times yes’. Indeed, on the last Sunday before the referendum, a letter from the Conference of Bishops was read in all Catholic churches across Slovakia, urging people to protect ‘the traditional family.’ It is unclear whether such explicit campaigning on behalf of the Catholic Church has served to promote, or rather damage the Alliance’s agenda.

In the end, however, few had expected such a low turnout. On the whole, only 21.4 per cent of the electorate cast their vote, while in none of Slovakia’s regions did turnout surpass 50 per cent. While some may see it as confirmation that ‘the dominant force in contemporary politics is voter apathy’, such a conclusion would be a grave oversimplification. It was clear that the vast majority of those going to polling stations would vote in favour – and indeed, over 90 per cent of voters backed each of the questions. Not turning up to cast a ballot presented the safest, easiest and most effective way to express disagreement with the agenda.

Chart: Result of the referendum for each of the three questions 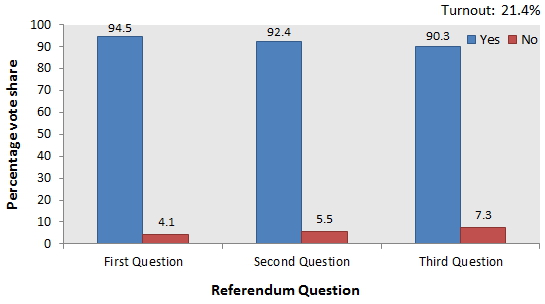 Note: The official Slovakian result is given without adjusting for invalid/blank votes. Results are rounded to one decimal place.

Implications of the vote

The referendum has served to reveal the limited sway the Catholic Church holds over the politics of a country where more than two thirds of people are nominally Christian. This is in stark contrast to Poland, where the anti-establishment Palikot’s movement, which managed to attract 10 per cent of the vote in the 2011 general election, campaigned mainly on ridding the public sphere of Church influence. In Slovakia, anti-establishment parties have in recent years entered parliament strictly on anti-corruption tickets, or as part of a broader revolt against mainstream parties. However, one should be cautious about classifying Slovakia as socially liberal based on this vote – rather, the country is better perceived as simply not being as socially conservative as many previously thought.

One unintended consequence of the referendum is that never before have life stories of members of the LGBT community populated the media space to such an extent. As a result, a form of liberal backlash may be building. With the general election just one year away, liberal issues such as separating the Catholic Church from the state, the decriminalisation of soft drugs, or indeed registered partnerships, may become more salient in political discourse. It is very likely that established, as well as new, political parties will adjust their policies to reflect the realities of post-referendum Slovakia.

Finally, many critics have pointed out that Slovakia can ill-afford to waste 6.5 million euros – roughly 8 per cent of annual public spending on orphanages – on such apparently pointless endeavours. However, such a critique pays inadequate attention to the nature and conduct of the plebiscite. Organised by a civic group, it was a purely bottom-up initiative that managed to capture the national agenda in line with the best democratic practices.

In a country where over the past twenty years fortunes have been embezzled with impunity, where the judiciary is one of the least efficient in the world in settling disputes, where the differences between the top and worst performing regions are among the highest in the EU, and where large parts of the Roma minority continue to live on the fringes of society, such civic action must be celebrated. One can only hope that next time, the energy will – in whatever form – be directed toward addressing the more pressing issues that Slovakia faces.

Note: This article gives the views of the author, and not the position of EUROPP – European Politics and Policy, nor of the London School of Economics. Featured image credit: Yann Gar (CC-BY-SA-3.0)