Estonia held a parliamentary election on 1 March. Allan Sikk writes that while the nature of the coalition which emerges from the election remains to be seen, the result was another success for the Reform Party, which has been in government continuously for the last sixteen years.

The most significant, although predictable, result of the 1 March general election in Estonia was another electoral triumph by the Reform Party (RE). RE has been part of governing coalitions continuously for sixteen years, and has held the position of Prime Minister for the last ten years. It is fairly likely to continue at the helm of government until 2019, cementing its dominance in Estonian politics. The chart below shows the results of the 2015 election and the previous general election in 2011. 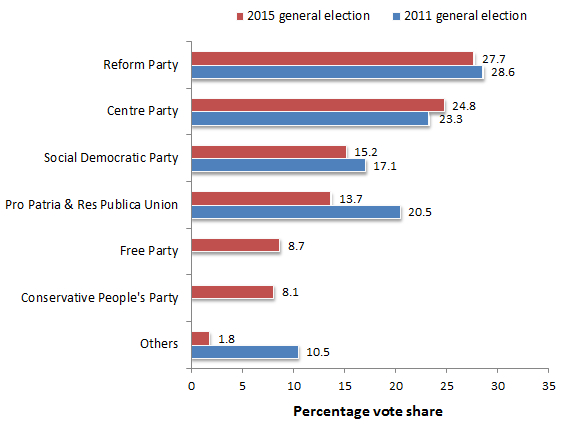 Even though two new parties entered the parliament (more on them below), the election was also characterised by stability. The vote shares of three out of the four erstwhile parliamentary parties changed little, as did electoral turnout (64 per cent). Only the conservative Pro Patria and Res Publica Union (IRL) suffered a notable loss of votes (6.8 per cent), mostly to the two new parties.

The continued success of RE can be explained by three factors: national security concerns, a successful leadership change, and a shrewd political strategy. As the incumbent, RE benefitted from voters seeking stability confronted with an increasingly aggressive Russia. In its campaign, RE emphasised the need for stability and boosting national defence. RE used NATO fighter jets as a backdrop for one of their campaign clips, for which it was criticised in the media, but this nevertheless helped cultivate among the voters an image of a party that prioritises defence.

Secondly, RE benefitted from a change of its leader and prime minister. One year before the election, Andrus Ansip – who had become the longest serving Prime Minister in the EU – stepped down to run for the European Parliament and later join the European Commission. He was replaced by a 34-year-old, Taavi Rõivas, the former Minister of Social Affairs. Rõivas was an unexpected choice after Siim Kallas, European commissioner and the initially designated formateur, withdrew following accusations over his presidency of the national bank in the early 1990s. Rõivas built up a strong public profile before the election and refreshed the image of the party, which had suffered from a string of scandals over party funding and the perceived arrogance of its leaders.

Finally, RE has established itself as the most strategically shrewd party in Estonia. Since its establishment in 1995, it has consistently retained or increased electoral support. Meanwhile, its coalition partners have often borne the cost of governing. With the change of Prime Minister in March 2014, RE also replaced the centre-right IRL with the centre-left Social Democrats (SDE) as its coalition partner. Remarkably, since then, both IRL and SDE have lost support in the polls.

Both lost voters to the new parties, but their campaigns also appeared hypocritical as they had been in and out of the government in the years prior to the election. Both tried to distance themselves from RE, but had to stand by government policies, most of which had been initiated by RE. Despite reduced parliamentary strength, at least one of them is very likely to enter the cabinet. The coalition will almost certainly be led by RE as the second biggest Centre Party (KE) is not a viable coalition partner for the other parliamentary parties.

The Centre Party has long been the biggest opposition party, but has failed to increase its vote share substantially since 1999. Its stagnating popularity can be explained by two factors – internal conflicts and connections to Vladimir Putin’s United Russia party. During the last parliamentary term, KE lost many prominent members who had been critical of the dominant leadership of Edgar Savisaar, the mayor of Tallinn. KE is the most popular party among the Russian-speaking minority that makes up about 30 per cent of the total population in Estonia.

In stark contrast to neighbouring Latvia, Russian parties have been absent from the parliament since 2003. Since 2004, KE has had a cooperation agreement with United Russia that has been a mixed blessing for the party. It has boosted the pro-Russian credentials of a party where ethnic Estonians dominate the leadership. It has also helped KE to win over some minority voters and has not put off others more critical of Putin’s regime, as other parties have been unable to win significant support among Russian-speakers. Yet, the Russian connection has limited KE’s electoral appeal among ethnic Estonians, particularly while Russia has become more authoritarian and belligerent.

Savisaar was mildly triumphant over his “silver medal”, although all other parties have ruled out cooperation with KE while he remains its leader. Unlike other parties, KE continues to challenge Estonia’s online voting, which in 2015 was used by around 30 per cent of voters. KE’s support among online voters was much lower than its overall support (24.8 compared to 7.7 per cent) and Savisaar has mused that “security concerns” over online voting prevent KE from becoming the biggest party.

The two new parties that crossed the five per cent electoral threshold were the Free Party (EVA) and the Conservative People’s Party (EKRE). EVA was partly a splinter from the Pro Patria and Res Publica Union and partly a genuinely new party. The Pro Patria and Res Publica Union was established in 2006 as a merger of the centre-right romantic nationalist Pro Patria (IL) and a more pragmatic Res Publica (RP). Many from the IL wing (known as the “wooly jumpers”) left to establish the Free Party after they grew increasingly alienated as the RP wing dominated the party. EVA has also called for democratic reforms such as the curtailing of electoral campaign costs and electoral reform. In that, it capitalised on the mobilisation behind People’s Assembly, a crowdsourcing of democratic reform proposals in 2012-13. Thus, EVA also bears hallmarks of parties of ‘newness’ and anti-establishment reform parties.

While EVA is in the Estonian political mainstream, EKRE is firmly placed at the far right end of the political spectrum. It is staunchly anti-Russian, anti-immigration, anti-multiculturalism and pro-natalist. It campaigned particularly vocally against the legalisation of same-sex partnerships by the parliament in October 2014. The inclusion of KE or EKRE in the governing coalition is very unlikely. Regardless of which of the other four parliamentary parties will join the cabinet, no seismic policy shifts are in sight.

Note: This article gives the views of the author, and not the position of EUROPP – European Politics and Policy, nor of the London School of Economics. Featured image: Seat of the Estonian Parliament, Credit: Dennis Jarvis (CC-BY-SA-3.0)

The spread of anti-establishment politics across Central and Eastern Europe may hold lessons for West European countries.