Liberal-democratic parties have been a stable feature of several party systems in Europe, but in recent years parties such as the Liberal Democrats in the UK and the FDP in Germany have experienced significant downturns in support. Bruno Marino assesses the challenges that such parties now face in European elections. He argues that while there are notable problems facing certain parties, such as the growth of new challengers on the far-left and far-right of the political spectrum, the notion that liberal-democratic parties are now on an irreversible decline is premature.

Are Europe’s traditional liberal-democratic parties under threat? All over Western Europe, they have been experiencing difficulties stemming from a variety of different sources. The 2014 European Parliament elections indicated that several liberal-democratic parties, including those in the UK, Italy, and Germany, were experiencing a serious backlash. Nevertheless, this situation, which has diverse and varied explanations, is not necessarily irreversible. Indeed the rise in support for the Spanish party Ciudadanosin recent weeks illustrates that this decline may only be temporary – or at least confined to individual countries.

As a first step, however, how can we classify a party as liberal-democratic in European party systems? An obvious starting point is to take parties that are members of the group of the Alliance of Liberals and Democrats for Europe (ALDE) in the European Parliament. In some cases, such as the UK, this makes the task fairly straightforward as the Liberal Democrats, as members of ALDE, clearly classify as a liberal-democratic party. In other cases, however, the situation is more complex, as smaller parties may not have enough support to win representation in the European Parliament and therefore lack strong links with European Party families. In Italy, for instance, no party associated with ALDE managed to win a seat in the 2014 elections.

Whichever definition we use, we do not need to look far for examples of declining support for liberal-democratic parties. The Liberal Democrats in the UK won only a single seat in the European Parliament in 2014, down from 11 in the previous elections in 2009, and are currently polling at historically low levels ahead of the 2015 UK general election. In Italy, ALDE members had accounted for 7 of those elected in 2009, but were wiped out in 2014.

Does this mean that liberal-democratic parties are ceasing to have any relevance in Italy and the UK? I would argue to the contrary. In the UK the Liberal Democrats are still part of the governing coalition, following a strong performance in 2010, and depending on the electoral arithmetic it is still possible they could return to government after the 2015 elections. Meanwhile Mario Monti and his Scelta Civicaparty were at the centre of Italian politics from 2011 until 2013. Of course, unlike the Liberal Democrats, Monti’s rise to power in 2011 was not the result of an election; yet both these examples show that, despite their latest troubles, liberal-democratic parties and politicians have nevertheless exerted a real say in national politics in recent years.

Clearly, this does not obscure the real problems liberal-democratic parties are facing – and indeed have faced over recent decades in some cases. The key losses suffered by ALDE parties in 2014 were primarily caused by electoral defeats for the Liberal Democrats, the FDP in Germany, and Scelta Europeain Italy (a coalition put together by Scelta Civica and some smaller parties). The performance of these parties in particular resulted in ALDE’s total share of the seats in the European Parliament falling from 11 per cent in 2009 to 8.7 per cent in 2014 (as shown in the chart below). In the Italian case, the 2014 result was so disastrous that it triggered the demise of liberal-democratic parties altogether: they have all but disappeared from the electoral landscape in the country since last May.

Chart: Percentage of seats held by ALDE parties in the European Parliament (1979 – 2014) 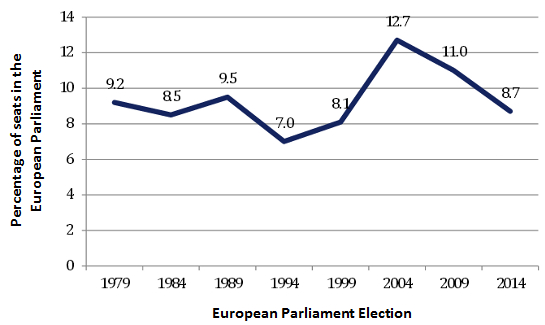 So where liberal-democratic parties have suffered serious losses what explains this decline? There are many possible answers. Some would point to national peculiarities: in Italy, liberal-democratic parties have consistently represented a minority of the electorate since 1945, while in the UK the Liberals and the Liberal Democrats have been able to obtain noticeable percentages of the popular vote, but not always equal percentages of seats in Westminster, due to the disproportionality of the electoral system.

More general phenomena also play a role, however. The first problem facing liberal-democratic parties is that they have regularly found it difficult to draw a distinction between their own platform and those of left-wing and right-wing rivals. The very words ‘liberal’ and ‘democratic’ are ambiguous and can be attached to parties from different parts of the political spectrum. Moreover, when liberal-democratic parties enter into coalition with other parties associated with specific policies, such as in the liberal-conservative coalitions in Germany (FDP-CDU/CSU) and the UK (Liberal Democrats and Conservative party), certain sections of the electorate may become less willing to back the party in future elections. This could be because the identity of the liberal-democratic party becomes obscured, with the party now deemed by voters to be too closely associated with their larger rival.

The second problem for liberal-democratic parties stems from the rise of so called ‘post-materialist’ or populist and extremist parties. These respectively include Green parties or parties on the extreme left and right. In Germany, for instance, the current parliament contains a strong contingent of representatives from the Greens as well as the far-left Die Linke. In Spain, the far-left Podemos is currently riding high in the polls, while the right-wing Front National has been a consistent presence in French politics in recent years.

Some hints as to the effect of these developments on liberal-democratic parties are apparent in the 2014 European Parliament election results, where the rise of the Eurosceptic AfD in Germany, UKIP in the UK, and Five Star Movement in Italy corresponded to a steady decline in support for liberal-democratic rivals. However establishing the exact causal link between these trends is difficult and caution should be exercised when making broad statements about such varied party systems.

How can liberal-democratic parties reverse their decline?

The best response of liberal-democratic parties to the challenges they face depends to a large extent on the situation within individual countries. In the UK, however, where the Liberal Democrats face the most immediate danger with the upcoming election in May, the most important component of any strategy will be to develop a distinctive electoral narrative that allows the party to stand out from its competitors.

One example of such a strategy was the decision by the Lib Dem leader, Nick Clegg, to challenge UKIP’s Nigel Farage to debate the UK’s membership of the European Union. While the general consensus was that Clegg lost this exchange, it nevertheless allowed the party to present a distinct image by emphasising its pro-European stance in comparison to other parties on the centre-left and centre-right. Albeit this strategy is not, of course, without its risks.

A ‘race to the centre’ by centre-right and centre-left parties has to some extent limited the policy-space available for liberal-democratic parties. However in this context the rise of challengers on the far-left and far-right may open the door for liberal-democratic parties to monopolise the centre ground. In the UK, it could also give a boost to the Liberal Democrats in 2015. If both Labour and the Conservatives fall short of a majority of seats, they may need the Lib Dems as a coalition partner to govern.

The picture in Italy remains far less clear. Matteo Renzi’s Democratic Party is essentially governing without a viable opposition, with Silvio Berlusconi’s party deeply divided and centrist parties struggling to resist the pull toward Renzi, while the Five Star Movement appears unwilling to accept any compromises with those in power. Only time will tell whether a new liberal-democratic party can fill this void and find an answer to the challenges raised above.

Ultimately, the liberal-democratic road to power is paved with difficulties, both old and new. Yet it is not completely impractical and any notion that such parties are now on an irreversible decline remains premature.

Bruno Marino – Scuola Normale Superiore di Pisa, Institute of Humanities and Social Sciences
Bruno Marino is a PhD student in Political Science and Sociology at the Institute of Humanities and Social Sciences, Scuola Normale Superiore, Pisa. He was previously an intern in the Westminster office of the Liberal Democrat MP for Manchester-Withington.