Israel held legislative elections on 17 March, with the result producing a victory for incumbent Prime Minister Benjamin Netanyahu’s Likud party. Abraham Diskin writes on the coalition formation process which will follow the elections. He notes that the most likely outcome is for Netanyahu to attempt to form a coalition of the right which includes the new centrist party Kulanu.

In Israel, like in most other multi-party parliamentary systems, the main question that voters face is what governmental coalition is expected following the elections. The political outcome of elections is dictated not only by the voter, but also by the negotiations held between the leaders of the parties that gained representation in the elected parliament. Usually the government is supported in parliamentary systems by the majority of parliament members. In the lack of such a majority the government may face either a vote of no confidence in parliament or inability to implement its policies.

Since the first general elections of 1949, Israel has had 33 governments. Many argue that the country switching its government on average every two years is an indication of severe stability and governability problems, but in fact the number of governments reflects in many cases technical and formal reasons and not real political difficulties. Only once, in 1990, has an Israeli cabinet faced a successful no-confidence vote.

All the governments of Israel have enjoyed the support of a parliamentary coalition majority when formed. As the Political Data Yearbook published by the European Journal of Political Research illustrates, this is the situation in many parliamentary multi-party systems. It characterises Germany, Austria, Belgium, Switzerland, Ireland, Finland, Luxembourg and the young democracies of Poland, the Czech Republic, Hungary, Estonia, Latvia and Lithuania.

Even in countries that usually have a clear majority party we sometimes witness the necessity to form a governmental coalition. Thus, the May 2010 UK elections ended in a hung parliament which resulted in the present coalition. However while the 2010 vote was the first time since 1974 that a general election in the UK had produced a hung parliament, in Israel the situation is quite different: in fact, general elections have never produced a majority party.

Coalition formation in Israel after the 2015 elections

Hypothetically we could imagine a situation in which one party controls 40 per cent of the seats in a national parliament, while two remaining parties each control 30 per cent of the seats. If the two smaller parties preferred to cooperate with each other and strongly opposed the largest party then it might seem that the most appropriate outcome would be for the two smaller parties to enter into a coalition. In Israel, however, a different approach has dominated the discussions surrounding the 2015 elections.

Instead, the focus has largely been on the gap between the country’s two largest parties: the centre-right Likud party led by incumbent Prime Minister Benjamin Netanyahu, and the centre-left Zionist Union. Despite the Zionist Union seemingly leading throughout the whole of the campaign, it was Likud who came out on top. The last 15 public opinion polls had predicted that the number of seats to be won by Likud would not exceed 23 (out of the 120 Knesset seats), while the Zionist Union was not expected to receive any less than 24. As the table below shows, however, the actual result was quite different, with Likud winning 30 seats and the Zionist Union only 23.

Table: Result of the 2015 legislative elections 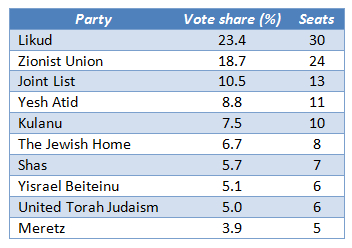 It seems however that the real question all along should have been on the possibility of one of the two large parties forming a coalition after the elections. In most multi-party systems the coalition is dictated by the ideological proximity between the different political parties. The term “policy range” is used to describe the distance between the party at the extreme right of a potential coalition and the party at its extreme left.

In most cases all the parties within this range participate in the coalition as there is no “ideological cost” associated with their inclusion. A coalition where all parties within the policy range are included is often described as a “connected” (or “closed”) coalition. If the partners wish to form a majority (“winning”) connected coalition, and if the parties can be placed on a single dimension from left to right, the only party whose participation is guaranteed is the median (“pivotal”) party. There is no majority of parliament members either to the right or to the left of the pivotal party.

Following the March 17 elections the new Knesset factions can be divided into three groups. The left-wing group includes Zionist Union, the Joint (“Arab”) List, and Meretz. The right-wing group includes Likud, The Jewish Home, Shas, United Torah Judaism, and Yisrael Beiteinu. The centre group includes Yesh Atid and the new party Kulanu, which should be placed to the left of Yesh Atid. The chart below illustrates this picture together with the number of seats held by each party. 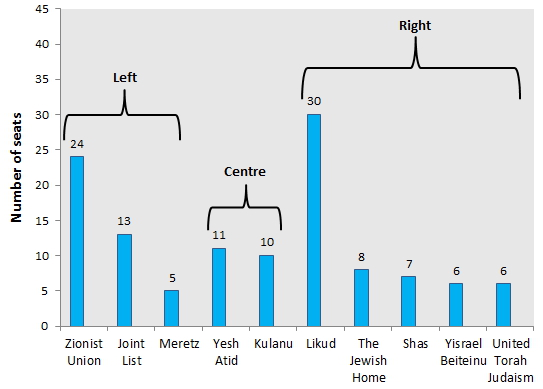 Kulanu’s leader, Moshe Kahlon, was previously a Likud member and his stances on many issues seem to be more to the right than the stances of Yesh Atid’s leader Yair Lapid. Furthermore, a conflict between Netanyahu and Lapid, who participated in the outgoing government, was one of the main developments that pushed Netanyahu to call early elections. Hence, Kulanu should definitely be regarded as the pivotal party. In fact, this was the situation throughout the whole campaign, regardless of the number of seats predicted for the two largest parties.

Netanyahu and the Israel-Palestine conflict

Since his election victory in 2009, Netanyahu has consistently tried to create conditions that will enable the implementation of the so called “two-state-solution” to the Israel-Palestine conflict. In a famous address in June 2009 he became the first Likud leader to fully support the establishment of a Palestinian State as a neighbour of Israel. He was also the first leader to freeze Jewish construction in the West Bank with the hope of convincing the Palestinian Authority to negotiate a peace agreement.

When forming his post 2009 election coalition, Netanyahu tried to persuade the then leader of the centrist Kadima party, Tsipi Livni, to join his government on a “parity basis” and with guaranteed veto power on all issues. When this was rejected he moved further to the left and convinced Ehud Barak, the leader of the Labor Party, to join his government. After a split in the Labor party in 2011, Barak and three other members of his new faction held ministerial posts, although their Knesset faction consisted of only five representatives.

Following the 2013 elections Netanyahu signed an agreement with Tsipi Livni, nominating her as Minister of Justice and the cabinet minister responsible for the negotiations with the Palestinian Authority. Livni is known as an enthusiastic supporter of the two-state-solution. Netanyahu did so before reaching an agreement with any other party and despite the fact that he could have formed a majority coalition without the participation of Livni’s new party Hatnuah. Following the elections of the 20th Knesset on 17 March circumstances will push Netanyahu to try and form a 67 member coalition with all of the right-wing parties and Kulanu, although the structure of this coalition may change at a later stage.

Likud’s poor standing during the campaign pushed Netanyahu to make a couple of unfortunate comments on Election Day with reference to the possibility of adhering to the two-state-solution and concerning the “electoral threat” to his party caused by Arab voters’ participation in the elections. He did so with the hope of convincing voters supporting other right-wing parties to change their intention and vote for Likud.

Immediately after the elections he emphasised, however, that he is committed in principle to the idea of the two-state-solution. Nevertheless, he explained that the implementation of this solution is highly problematic under the present conditions given the consistent refusal of the Palestinians to directly negotiate with Israel, because of the cooperation between PA president Abbas with Hamas, and in face of the present violent environment across the Middle East.

Note: This article gives the views of the author, and not the position of EUROPP – European Politics and Policy, nor of the London School of Economics. Featured image credit: EEAS (CC-BY-SA-ND-NC-3.0)