A surge in support for two parties – Podemos and Ciudadanos – ahead of the Spanish general election later this year has led some commentators to ask whether Spain’s two party system, which has traditionally been dominated by the centre-left PSOE and centre-right People’s Party, is coming to an end. Alejandro Quiroga writes on how support for the parties sits following parliamentary elections in Andalusia on 22 March. He argues that while municipal and regional elections in May will give a better idea of how the general election might go, it remains far from clear that the era of two party politics is finished in Spain.

“The two-party system is dead”, emphatically stated the leader of Ciudadanos, Albert Rivera, following the Andalusian elections on 22 March. The obituary of the bipartisan system of the Socialists and the Conservatives that have traditionally dominated Spanish politics came from a man with good reasons to be optimistic. Ciudadanos gained nine seats in the Andalusian Parliament, became the fourth largest party in the regional chamber and positioned itself as the gatekeeper in the eventual formation of a coalition government in southern Spain.

The electoral results in Andalusia confirmed what opinion polls had revealed in previous weeks: a spectacular surge in support for Ciudadanos all over Spain. The party currently ranks fourth behind the anti-austerity Podemos, the social-democratic PSOE and the conservative People’s Party. How can one account for the rapid emergence of Ciudadanos as a new political force? Are Ciudadanos the ‘Podemos of the right’, as The Guardian recently named them? Is Albert Rivera’s party a real threat for the Spanish political establishment?

Ciudadanos: a genuine threat to the Spanish mainstream?

Ciudadanos was created by a group of Catalan scholars and journalists opposed to Catalan nationalism in 2006. The party presented itself as the defender of Spanish identity in a territory dominated by Catalan nationalists, endorsed the 1978 Constitution territorial framework, contested the 2006 Catalan Statute of Autonomy and promoted secular policies and individual freedoms.

Originally, the party limited its actions to Catalonia. In 2006 and, again, in 2010, Ciudadanos managed to get three seats in the Catalan Parliament. In 2012, the figure rose to nine MPs and the party obtained 7.5 per cent of the vote. Following their good results in Catalonia, Ciudadanos decided to enlarge their political horizons. In May 2014, Albert Rivera’s party got two MEPs (3.4 per cent of the vote nationwide) and announced it would run for the 2015 regional and municipal elections across the country.

Ideologically, Ciudadanos has combined the promotion of liberal economic policies with a robust defence of individual rights and freedoms. The party supports gay marriage and is pro-choice regarding abortion. They have also opposed the radical restriction of civil liberties enforced by the ruling People’s Party, which included curtailing the right to protest and curbing freedom of speech.

The recently-published Ciudadanos’ economic programme was drafted by the London School of Economics Professor Luis Garicano and Manuel Conthe, former junior minister of the Treasury under the right-wing José María Aznar government. The document argued for using market forces to break Spain’s cartels, furthering competition to lower prices in industries such as electricity and communications, a reduction of taxes for the highest incomes and the creation of tax-credits for the lowest salaries. In some respects, Ciudadanos proposes the strengthening of civil liberties as a way to compensate for the continuation of the neo-liberal economic policies that have led Spain to unprecedented levels of inequality and poverty.

Albert Rivera has also flirted with xenophobic ideas. Like the People’s Party, he supports restricting access to the Spanish National Health Service for undocumented immigrants. But the real key to Ciudadanos’ appeal lies in the party’s ability to portray itself as a new, fresh, anti-establishment organisation. Whereas the People’s Party and the PSOE are facing multiple allegations of corruption in the Spanish courts, Ciudadanos insist on tackling fraud and fostering transparency.

As Ciudadanos has not taken government responsibilities so far, their image as a clean party has not been tainted by corruption scandals. Their message of ‘regenerating’ the country’s political system has gone down well among different sectors of Spanish society. According to the latest polls, Ciudadanos are able to lure disaffected voters form both conservatives and socialists, although their greatest catch is among former People’s Party supporters.

There are more mundane reasons behind Ciudadanos’ rising popularity. Abert Rivera is a charming, 35-year-old leader and a regular on political debate TV shows. More importantly, Ciudadanos has been blessed with very friendly coverage in the Spanish media. The liberal newspaper El País and conservative El Mundo, for example, have presented Ciudadanos in a notably positive light over recent weeks, in an attempt to undermine the appeal of Podemos. In fact, it is against the backdrop of Podemos’ spectacular rise that the surge of Ciudadanos has to be considered.

The left-wing, anti-austerity party has led nearly all polls since November 2014, sending shockwaves through the Spanish political establishment. Both conservatives and socialists have reacted to the challenge by warning Spaniards of the apocalyptic consequences of a Podemos victory, a scaremongering campaign that has also been orchestrated in most of the Spanish media. In this context, Ciudadanos emerge as the moderate option vis-a-vis Podemos.

The “tranquil change” that Rivera promises is often contrasted with the more far-reaching transformation sought by Podemos. For Professor Garicano, Podemos’ economic proposals are unrealistic and unfeasible, while Ciudadanos’ plans are pragmatic and workable. Yet critics have pointed out that if the financial elites and their tightly-controlled media are pleased with the surge of Ciudadanos, this is because they think that Abert Rivera’s party poses no real threat to the status quo.

It also seems unlikely that Ciudadanos will bring the two-party system to an end. If the Andalusian elections are anything to go by, the ‘old’ parties seem to be in fairly good health. The Socialists won the elections with 35 per cent of the vote, followed by the People’s Party with 27 per cent. Podemos came third with 15 per cent, Ciudadanos fourth with 9 per cent, and the eco-communists of Izquierda Unida fifth with 7 per cent, as shown in the figure below. 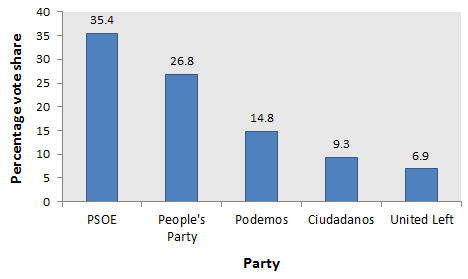 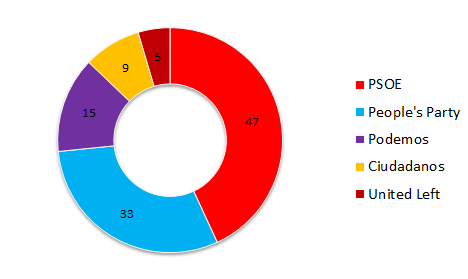 Note: Vote share figures are rounded to one decimal place. Only parties that won a seat are shown. PSOE is indicated in the charts, but the party that competed in the election was the Andalusian affiliate, the Spanish Socialist Workers’ Party of Andalusia (PSOE-A). For more information on the other parties see: People’s Party (PP); Podemos; Ciudadanos; United Left The Greens-Assembly for Andalusia (IULV-CA). Source: Argos

True, results in Andalusia cannot be extrapolated nationwide and opinion polls give better prospects to the ‘new’ parties in the forthcoming general election. Yet these very polls show that the ‘old’ parties retain a high percentage of votes. Figures vary but most surveys indicate that over 40 per cent of the Spanish electorate would go for either PSOE or PP at the ballot box. Moreover, the emergence of Ciudadanos means that the protest vote is now divided between Rivera’s party and Podemos, a split that benefits socialists and conservatives.

Municipal and regional elections in May and the general election later this year will reveal how strong Ciudadanos and Podemos are and how sick the bipartisan system is. Currently, the political landscape is highly volatile and there is a limit to what political scientists can infer about eventual developments from survey data. Over the next months, Spaniards face a historic opportunity to transform their country – and one that may not reoccur in a long time. It remains to be seen whether they really want change or would prefer to keep the two-party system. Regardless of what Albert Rivera may say, the Spanish political establishment is far from dead and has no intention to go quietly.

Note: This article gives the views of the author, and not the position of EUROPP – European Politics and Policy, nor of the London School of Economics. Featured image credit: Flickr/Ciudadanos