As a result of the Ukraine crisis, Russia was removed from the G8, with the West also putting in place a series of sanctions. But what impact are these measures likely to have on the trust of Russians in Vladimir Putin’s leadership? In a new study, Pavel Yakovlev and David Gilson investigate the factors that determine domestic trust ratings for the leaders of 20 different states across the world. They find that a variety of elements play a role, with countries that are more open economically and have greater press freedom tending to exhibit a more cynical view of their leadership. However the fact that isolation and tighter controls on information tend to increase domestic trust in political leaders suggests that sanctions can often have the opposite effect of that intended.

Figure 1: Percent of respondents expressing trust in leader by country, 2008 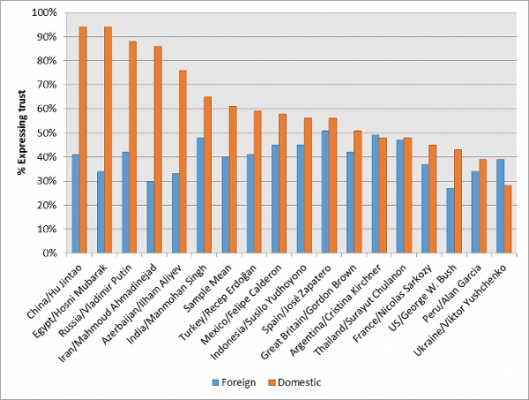 What fuels this trust, both at home and abroad? Using the results of the 2008 WPO survey, we estimate the associative determinants of cross-country differences in trust ratings for 17 country leaders (140 groups of two countries, or dyads). The sample is unbalanced since not all countries and leaders were represented proportionally in the WPO poll. For example, the leaders of six countries (China, France, Iran, Russia, UK, and US) were rated by 18 other countries each (108 dyads), while the remaining 11 leaders (32 dyads) were rated by as few as one and as many as six other countries. Jordan, Nigeria, and South Korea are the only countries in the sample that do not rate their own leaders.

The dependent variable in our study is the share of respondents in a foreign country expressing “a lot” or “some” confidence in a leader minus the share of domestic respondents expressing “a lot” or “some” confidence in the same leader. The vast majority of trust differences are negative, suggesting the prevalence of anti-foreign or pro-domestic bias in leader ratings. The average percentage of respondents who trust a foreign leader is 40 per cent and the average for domestic leaders is 61 per cent, placing the average trust difference at negative 21 per cent. The remaining variables in our model are also expressed as a dyadic (foreign-domestic) difference. Our regression model seeks to explain the “distance” in trust ratings by the “distance” in country and leader characteristics. Through the tests in our model, we find that just nine variables can explain over 60 per cent of the variation in leader trust ratings.

The natural variable of interest in our study is press freedom. The existing literature indicates that the news media plays an important role in shaping public opinion. We also included additional relevant factors such as leader characteristics, GDP, trade, democracy, alliances, culture, and national mentality in the model. We find that those factors with the strongest effects on the difference in trust ratings for a given leader are, in descending order: net exports, press freedom, uncertainty avoidance, the leader’s race, democracy, long-term orientation, GDP per capita, cultural fractionalisation, and NATO membership.

Since the variables enter the model as the difference between two countries’ values, interpreting the coefficient’s sign is a little tricky. A positive coefficient suggests that the average difference in trust ratings and the difference in some independent variable move in the same direction. For example, greater domestic press freedom would be expected to lower a leader’s domestic trust rating, bringing it down closer to his or her foreign trust rating. Similarly, a relative increase in a foreign country’s democracy, GDP per capita, net exports, cultural diversity, and long-term orientation can increase foreign trust in a given leader. For a negative coefficient, the opposite is true: foreign trust in a domestic leader falls (the difference widens) when foreign countries increase relative to the domestic in uncertainty avoidance, for example.

Several broad conclusions can be inferred from these results. It appears that greater trade openness, cultural diversity, economic development, political and press freedoms promote a generally lower but more equal level of trust in leaders across countries. Conversely, differences in military alliances, uncertainty avoidance, and race seem to exacerbate the trust gap between countries. The results suggest that the leaders of repressive countries with tightly controlled media can use the information vacuum that isolation brings to their own advantage, often increasing their domestic popularity. Therefore, recent economic sanctions against Iran and Russia might be counterproductive if their goal is to lower domestic trust in the countries’ leaders.

*Another WPO poll was conducted in 2009. Although most national leaders remained unchanged since 2008, there were several important deviations: Barack Obama, who replaced George W. Bush, received much higher trust ratings abroad than his predecessor and Vladimir Putin stepped down (temporarily) to become Russia’s Prime Minister. These changes might have introduced more noise into the data, therefore the 2008 WPO poll was used instead.

Note: This article is based on the paper “Public Trust and Press Freedom” published in the Economics Bulletin and first appeared at our sister site, USAPP – American Politics and Policy. The article gives the views of the authors, and not the position of EUROPP – European Politics and Policy, nor of the London School of Economics. Featured image credit: Terry Johnston (CC-BY-SA-3.0)