The proportion of women elected to parliament in the UK remains low compared to other countries. In this post, Chris Terry examines the gender balance of parliamentary candidates for the upcoming 2015 UK general election, and concludes that some progress is being made. Nevertheless, he suggests switching to a system of proportional representation would increase the representation of women faster than is likely under the current first-past-the-post system.

The importance of women’s representation in parliament should not be underestimated. That only 22.8 per cent of MPs in the UK are women is a shocking underrepresentation of half the British electorate. To function best, parliament needs the widest possible set of experiences from its representatives.

In the league table of women’s representation in parliaments, the UK languishes at a slightly embarrassing 56th out of 141 – below states such as Rwanda, Nicaragua, Algeria and Kyrgyzstan. At the Electoral Reform Society our Women in Westminster report looked into how many women might be elected after the 2015 UK general election, by modelling likely results. We found a likely rise after the next election to 29.5 per cent women, which would put the UK up to a less embarrassing 36th. Yet progress remains slow.

For women to be elected in the UK they must be selected by political parties. If a constituency is presented with no female candidates, then obviously it cannot possibly elect one. So the selection of women candidates by parties is of vital importance. The Chart below indicates the percentage of candidates in the 2015 election for each of the main parties who are women.

Chart: Percentage of female candidates by party in the 2015 UK general election 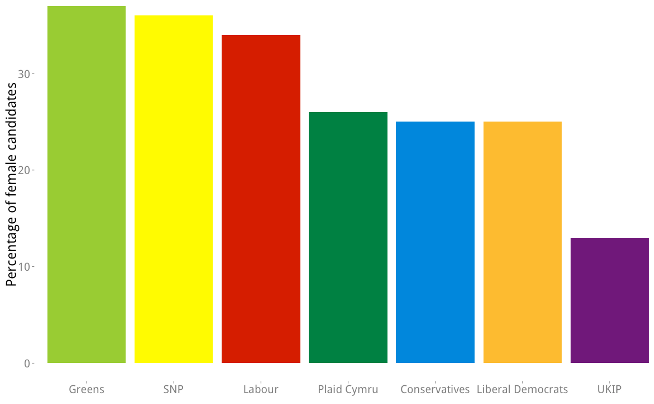 The Greens have selected the largest number of women candidates, though amongst the parties likely to win substantial numbers of seats, the SNP and Labour have the best record. Yet, in order for there to actually be female MPs these women must be elected. In order to be elected they need to be in winnable positions. Women candidates deployed in seats certain to be won by male candidates from other parties will result in no further advance in women’s representation. The Table below shows the percentage of male and female candidates in target seats for Labour and the Conservatives.

As Table 1 shows, in target seats for the main two parties the story is positive, especially on the Labour side, with a majority of women selected in the party’s top 50 and top 100 targets. However, when we look at safe seats, in Table 2 below, the story is less positive.

Here the problem is incumbency. Once an MP is in a seat, they are difficult to deselect. And because the UK’s archaic voting system tends toward the creation of safe seats, there are a lot of places where incumbents stay in position for a long time. Our report shows that of the 312 incumbents standing for election this year who were originally elected in 2005 or earlier, only 18.3 per cent are women. Of the 67 incumbents elected before 1992 and standing again this year, just 11.9 per cent are female.

These figures reflect a major reason for the UK parliament’s continued male dominance. Women can only be elected in new gains or in seats where they replace retiring incumbents. However, there are only so many of these seats, and many continue to be held by men selected long ago. Hence large portions of parliament whose MPs were selected in less representative times for women remain essentially blocked until those MPs decide to retire. This partly explains why Britain ranks so lowly. Countries with more proportional electoral systems tend to have superior gender representation.

Yet while Britain’s First Past the Post acts against the representation of women, the fact that the number of women candidates is going up and that the Electoral Reform Society are able to project a rise in women does show that parties can move forwards in this area. A change to a proportional system would make it easier for parties to improve gender representation, but that cannot be done in isolation. Parties can and should work to guarantee better gender representation into the next parliament and beyond.

Note: This article originally appeared at LSE’s UK general election blog and gives the views of the author, not the position of EUROPP – European Politics and Policy, nor of the London School of Economics. Featured image credit: Never House (CC-BY-SA-3.0)