Both China and the EU have attempted to form strong relationships with African countries over recent years, but how do citizens within these countries view China and the EU as development partners? Floor Keuleers presents survey evidence from a number of different countries in Africa. She notes that while views of the EU are positive in most cases, there is no evidence that the EU is seen as a better development partner than China overall.

In recent years, few aspects of the European Union’s relations with Africa have sparked quite as much academic and media interest as the challenges posed by China’s increasing presence on the continent. In addition to concerns of a more economic and strategic nature, attention has focused on a ‘competition for the hearts and minds’ taking place between so-called emerging and traditional donors. China, it is said, offers a credible alternative model of development – and it is sparing no public diplomacy efforts in order to curry the favour of ordinary Africans.

How successful has this Chinese ‘charm offensive’ been? And does the EU need to worry about waning popularity as a development partner for Africa? So far, the answers given to these questions have been largely anecdotal, leading to widely diverging conclusions. A more systematic examination of how the EU and China are perceived by African publics is therefore warranted.

Solid cross-country data on African public opinion is relatively hard to come by, but several sources do nevertheless offer very interesting insights. In 2008, the Afrobarometer Survey asked 26,513 Africans in 19 countries across the continent about their evaluation of different development partners. China and the EU were among the players included, through the question: “In your opinion, how much do each of the following do to help your country, or haven’t you heard enough to say?”

A first interesting finding concerns the proportion of respondents who felt they knew enough about the EU and China to be able to answer the question. As Table 1 illustrates, China’s contribution was more well-known than that of the EU in 17 out of 19 countries, and it scored considerably higher than the EU for all respondents taken together. This is all the more notable given that 2008 was fairly early on in the exponential growth of Chinese engagement, and it does shed new light on the EU’s profile as a traditional and well-established development partner.

Table 1: Respondents who felt they knew enough about the EU/China to evaluate their contribution to development (%) 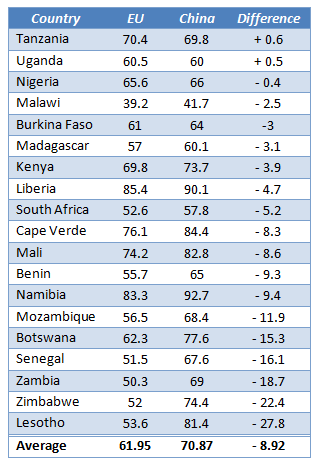 Source: Authors own calculations based upon Afrobarometer Round 4 (N=26,513)

Being well-known does not of course equal being popular: quite the contrary in many cases. However, when we look at the actual evaluations by respondents, it appears that the EU and China are seen in a similarly positive light. Across all nineteen countries, 36.8 per cent of respondents gave China the most positive score (‘helps a lot’). This indicator stood at a very similar 37.8 per cent for the EU. The scores for the EU and China did lie further apart more in some of the individual countries, as shown in Table 2.

Table 2: Respondents according the most positive and the most negative scores to the EU/China (%) 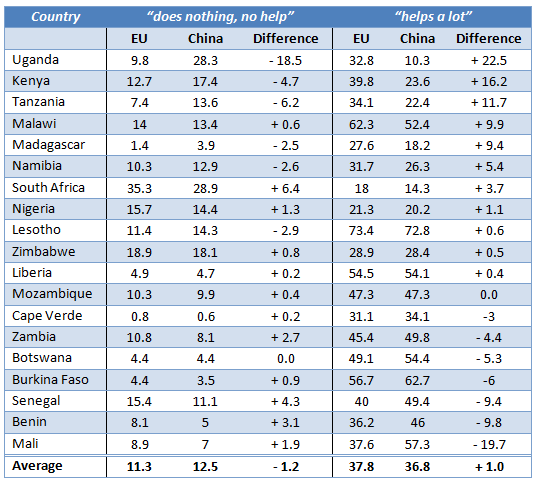 Delving a bit deeper into how individual respondents gave evaluations, it is interesting to see that around two thirds of respondents (59.13 per cent) accorded the same score to the EU and China. Instances in which one player was rated much more positively or negatively than the other were quite rare. It appears, therefore, that African public opinion is not characterised by the antagonism that pervades many academic and media accounts on the topic of emerging versus traditional donors. This could indicate two things: either the approaches of the EU and China are not seen as very different by Africans, or they are seen as different but complementary rather than mutually exclusive. Further research and more in-depth data collection is needed to shed light on this.

One way of gaining more insights into why respondents answer in the ways they do is to look at how evaluations of China and Africa relate to other characteristics and attitudes of respondents. A multilevel analysis of the Afrobarometer data shows that respondents who see democracy as one of the top three priorities for their government have a stronger preference for the EU over China than those who do not. The same is true for respondents who attach greater importance to civil-political human rights and for respondents living in countries with less democratic regimes. This appears to indicate that the more abstract development discourses of the EU and China do influence African perceptions, and that there is some recognition of the EU’s focus on normative concerns.

Finally, given the fact that the Afrobarometer data was collected only once and several years ago, it is useful to have a look at a second dataset that allows for investigating changes in public opinion over time. Among European commentators who look less favourably upon China’s African engagement, there appears to be some optimism that any popularity China has gained will be short-lived. Once negative effects of its activities become apparent, the argument goes, African public opinion will turn against China.

The annual Global Attitudes Survey conducted by the Pew Research Center is very useful in this respect. The survey asks respondents if they “have a very favourable, somewhat favourable, somewhat unfavourable, or very unfavourable opinion” of a range of countries and actors. The evidence that Pew collected from 2007 until 2013 in Kenya, Nigeria and South Africa does not support the hypothesis of China’s decreasing popularity (see the figure below). The proportion of respondents with a favourable or very favourable opinion of China fluctuated in all three countries, but there is no sign of a consistent decline. In addition, China is certainly not faring worse than the EU in this respect. 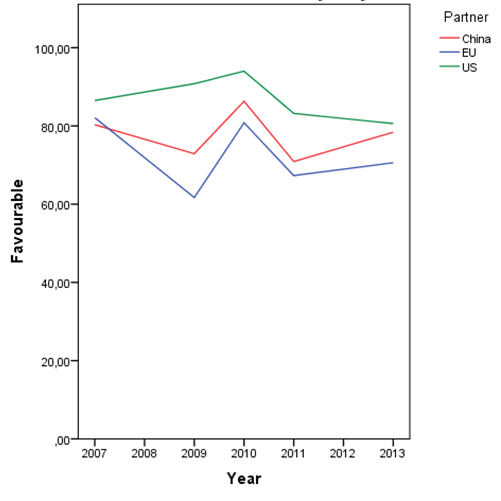 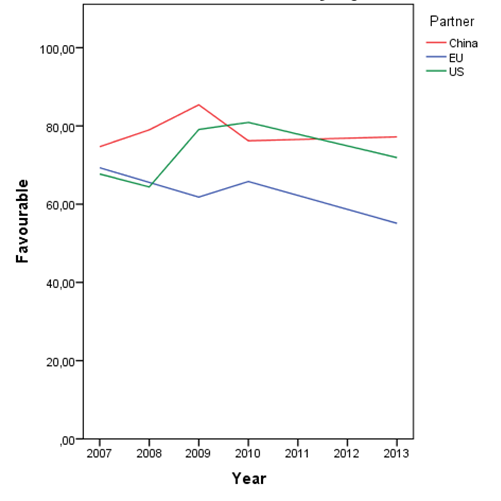 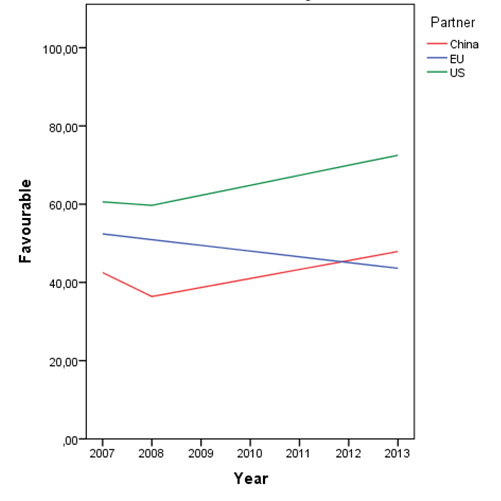 To summarise, the available empirical evidence indicates that African public opinion does not put the European Union on a pedestal as a special or better development partner. In contrast, the EU still seems to be struggling in terms of visibility and being known among African populations. Its contribution to development is evaluated positively, but so is China’s. Nor is there evidence that China’s popularity rose to an initial high but is now starting to falter. Contrary to what it might believe or hope, the EU does not appear to be a privileged development partner of Africans.

Note: This article gives the views of the author, and not the position of EUROPP – European Politics and Policy, nor of the London School of Economics. Featured image: Federica Mogherini meeting Dr. Nkosazana Dlamini Zuma, Chairperson of the African Union, Credit: EEAS (CC-BY-SA-ND-NC-3.0)

Floor Keuleers – University of Leuven
Floor Keuleers is a PhD Fellow at the Leuven International and European Studies (LINES) Institute of the University of Leuven in Belgium. She is currently also a visiting PhD researcher at the National Centre for Research on Europe (NCRE) of the University of Canterbury in New Zealand. Her research, which is supported by a fellowship from the Research Foundation Flanders (FWO), investigates how Sub-Saharan African populations perceive the European Union and China as development partners. Her research interests include EU foreign policy and development policy, the external image of the EU, EU-Africa relations and the Great Lakes region. 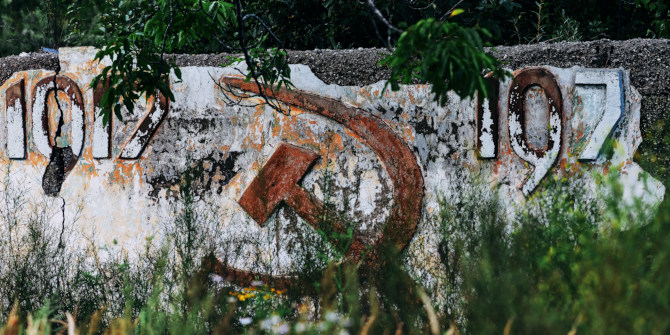