Poland will hold the second round of its presidential election on 24 May. Bartek Pytlas assesses the state of play after the first round of voting, where the incumbent President, Bronisław Komorowski, and Andrzej Duda from the opposition Law and Justice party secured enough support to progress to the next round. He notes that regardless of which candidate ultimately wins the presidency, the lasting story of the election is likely to be the success of independent ‘anti-system’ candidate Paweł Kukiz.

While the 2015 presidential election campaign in Poland initially seemed to be heading for a predictable result, the first round of voting provided a jolt for the Polish political establishment. At the onset of the contest, the incumbent President, Bronisław Komorowski of the liberal-conservative Civic Platform (PO), enjoyed the overwhelming support of more than half of the electorate. Ultimately, Komorowski only managed to secure 33.8 per cent of the votes in the first round, coming in one percentage point behind his main rival, Andrzej Duda from the national-conservative Law and Justice party (PiS).

The surprise story of the election was undoubtedly the performance of an independent candidate, the rock musician and civic activist Paweł Kukiz, as shown in Figure 1 below. In February 2015, his support oscillated around the 3 per cent mark. In the end, he managed to rally 20.8 per cent of voters behind his anti-system platform. What factors led to this result?

Figure 1: Opinion polling and voting in the first round of the 2015 Polish presidential election 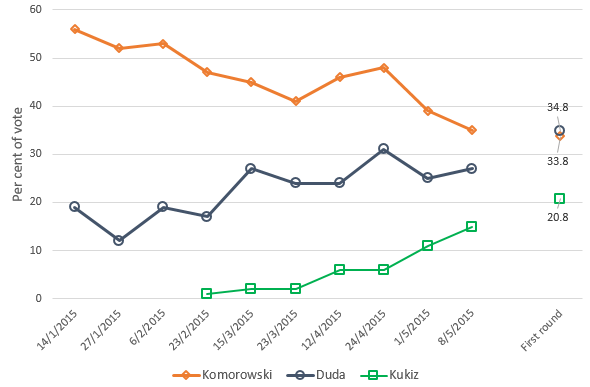 Note: Only figures for the top three candidates are shown. The polling figures are from TNS Polska Surveys for Wiadomości. First round results are from the Polish Electoral Commission.

The overwhelming support for Komorowski contributed to the fact that leading figures of other political parties were reluctant to invest too much of their efforts into what seemed to be a lost cause. Law and Justice Chairman Jarosław Kaczyński, unwilling to engage in the campaign before upcoming parliamentary elections later in the year, instead presented a dynamic, yet relatively unkown MEP, Andrzej Duda, as the PiS candidate. The social-democratic Democratic Left Alliance (SLD), whose presidential contender won 13.7 per cent of the votes in 2010, struggled until the end to find someone willing to compete. In the end, the SLD leadership went with Magdalena Ogórek, an unknown, young historian with virtually no political experience. Her campaign was almost non-existent, and the support from the SLD was half-hearted at best.

The feeling increasingly articulated in the public was that the presidential race has already been decided and that President Komorowski is taking his re-election for granted. His belated and idle campaign seemed to confirm this judgement. It is under these conditions that the Kukiz’ rhetoric of the return of civic control over politics resonated well with those portions of the public who anticipated that the popular vote will not matter and who saw their participation in the election reduced to a mere democratic ritual.

The ghost of politics past

Yet, the success of Kukiz is not only due to short-term factors such as the lack of alternative contenders, lacklusture campaigning, or the mood generated by a pre-decided plebiscite. It also has roots in the static, frozen patterns of political contestation with resulting isolation between parties and voters.

At least since 2005, party competition in Poland has oscillated around two actors: Civic Platform and Law and Justice. The division between “liberal” and “social” Poland articulated by then-Prime Minister Jarosław Kaczyński became a bipolar, emotionally laden conflict between modernisers and traditionalists. Yet, with time it increasingly contributed to strategic voting patterns between the supporters of the two camps.

The conflict has been kept alive by regular stand-offs between the PO and PiS on moral issues (among others: in vitro fertilisation or civil partnerships of same-sex couples). Here, the PO government was bound both by its broad electoral appeal and its own conservative faction. This resulted in reforms becoming frozen and a lack of clear policy. Public disentchantment grew further due to perceived government inactivity on economic issues, such as insecurity in the Polish labour market – a development touching in particular upon young people. Finally, the PO had to face protests over a lack of public consultations in regard to the ratification of ACTA and reforms of the pension system. The PiS on the other hand regularly procured a populist, anti-system critique, contesting election results and denying the PO’s legitimacy to govern.

Despite growing public dissatisfaction with the lack of clear policy stances and reforms, in previous elections the PO has been able to profit from its perceived status as the “lesser of two evils”: votes given to the party not on account of its own positions, but against the radical rhetoric of the PiS. Bronisław Komorowski pursued a similar strategy during his current presidential campaign. The conflict with the PiS has been reframed as a choice between “rational” and “radical” Poland.

Guarantees of harmony and security, rather than programmatic solutions for currently perceived grievances, were presented as the main arguments in favour of the incumbent President. Andrzej Duda, on the other hand, campaigned primarily against Komorowski, aiming solely at the core PiS electorate. The one group that found this bipolar contest increasingly irrelevant were the youngest voters. Once perceived as the party of “the young”, the PO consequently lost support in this voter group, who in 2015 largely supported Kukiz, as shown in Figure 2. 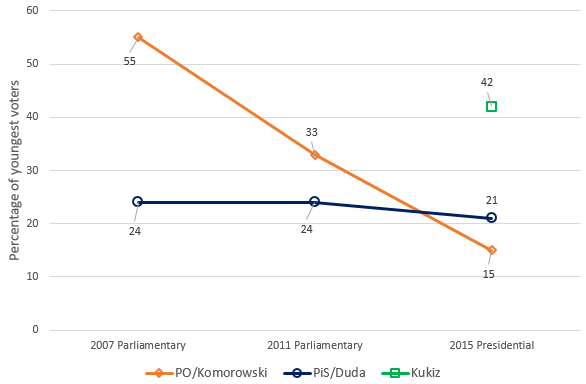 The success of Kukiz, who was able to offer an alternative to static, non-programmatic party competition patterns, did not emerge out of thin air. In 2005 the rock musician himself supported the PO and its “4xYes” civic participation programme. One of its elements was a petition in favour of single-member constituencies with a first-past-the-post system. As the programme was dropped, in 2012 Kukiz created his own grassroots initiative Zmieleni.pl (“The Shredded.pl”, currently “Ruch JOW” or “Single-member Disctrict Movement”). He argued that the PO had “shredded” hundreds of thousands of citizen signatures in favour of single-member districts and therefore departed from its founding myth of civic participation in politics.

The PiS on the other hand has regularly questioned the democratic legitimation of the government and thus contributed to the resonance of anti-establishment rhetoric in the mainstream. What the party did not predict, however, was that the protest embodied by Kukiz will not only be directed against the government. The PiS was therefore unable to jump on the bandwagon of the Kukiz movement, and instead has been labeled as part of the same “cemented” Polish political scene.

Is Kukiz here to stay?

Before the parliamentary election in autumn, Paweł Kukiz faces a challenge of re-branding his personal views into a unified platform with clear policy positions. The lack of an ideological party family “label” might make this task harder than in cases of the left-liberal Janusz Palikot or the eccentric, conservative-libertarian Janusz Korwin-Mikke.

The policy profile of Kukiz, whose self description is a “right-wing guy with a left-wing heart”, remains unclear. Socio-economically, he tends to lean toward liberalism, but underlines the need for solidarity. Socio-culturally, Kukiz turns towards national conservatism, stressing the importance of a patriotic and Catholic tradition. He opposes abortion, is undecided on the question of in vitro fertilisation and supports civic partnerships (while opposing same-sex marriage). Although these diverse attitudinal considerations are not unusual at the individual level and suffice for a one-time protest vote, they might in the long run become a challenge both for uniting various activist fractions and for consolidating voters.

Kukiz – similar to Beppe Grillo in Italy – is in this sense a political “anarchist”, whose primary goal is “popular awakening” against the establishment through civic participation, with only secondary reflection on ideological backgrounds or political consequences. His earlier support of the extreme right “Independence March”, strategically disguised by its organisers as a popular “patriotic” grassroots movement, seems a good case in point. In 2012 Kukiz withdrew his backing only after a notorious anti-Semite Jan Kobylański also joined the “honorary committee” of the nationalist march.

As expected, Kukiz did not back either of the candidates who will compete in the second round of the presidential election on 24 May. So while old, bipolar voting patterns will still suffice to decide who will become the next Polish president, the autumn election shall be the real test for Kukiz’ anti-system potential. The momentum of his current success might mobilise enough votes for parliamentary representation. The future parliamentary platform of Kukiz may nevertheless prove fertile ground for internal conflicts and instability – perhaps even more so than in the case of previous anti-establishment projects.

Note: This article gives the views of the author, and not the position of EUROPP – European Politics and Policy, nor of the London School of Economics. Featured image credit: Arkadiusz Sikorski (CC-BY-SA-3.0)

Hungary, Poland and Slovakia show the risks associated with mainstream parties co-opting the platforms of the radical right