For more than 70 years, GDP has been the most common method for measuring the economic activity of nations. But as a measure, GDP is incomplete, as it does not encompass important factors such as well-being. In new research which applies over 40 indicators covering economics, investments and sustainability to 149 countries, Enrique Rueda-Sabater examines how countries perform in converting their GDP growth into improvements in well-being for their citizens. While some countries, such as Brazil, are very good at converting growth into well-being, others like the United States, are less so. He writes that governments can take lessons from these results on how to devise inclusive long-term growth strategies.

Achieving rapid economic growth in terms of GDP is a limited measure of a country’s development success, as it ignores other important factors such as well-being. However, GDP has been the main way in which success has been measured. A key objective of our new report, Why Well-Being Should Drive Growth Strategies, the 2015 Sustainable Economic Development Assessment (SEDA) has been to develop a measure of well-being that could be used to benchmark countries against the rest of the world and against their most relevant peers. We have done that—building on academic work and from international organisations—because we saw a need for a practical diagnostic toolkit that could help governments to guide the formulation of inclusive growth strategies.

Measurement helps focus and we hope that our report also serves as a contribution to the broader effort of ensuring a focus on development goalposts that goes beyond economic growth. And we believe this is in line with the spirit of the discussions under way at the United Nations towards a new set of Sustainable Development Goals. Our analysis is organized around three elements: Economics (including the pace of growth, stability and employment creation), Investments (health, education and infrastructure) and Sustainability (broadly defined to encompass both social inclusion and the environment). It relies solely on objective indicators, as we believe that subjective measures of well-being have a valuable role to play, but are better used in parallel rather than in combination with objective ones.

We use a total of 43 indicators around those three elements to construct a relative score of well-being for 149 countries. By looking at the snapshot of SEDA scores in connection with a country’s per capita income we explore differences in how countries are translating their current wealth into well-being for their citizens. Similarly, by comparing the evolution of countries’ SEDA scores over seven years with GDP growth rates for the same period, we explore different performance in converting economic growth into well-being improvements (our data covers the period up to 2013).

Our work provided confirmation for some expected patterns and it has also shed some new light on other dynamics. We confirmed that for instance: Northern European countries (with Norway in the pole position) lead the world in terms of current well-being; oil-rich countries are not performing well in translating their wealth into well-being; and there is a pervasive tension between growth and environmental protection.

Among other findings the following are worth noting in terms of individual countries: Singapore emerges as one of the top scorers in current well-being—the only non-European country at that level; Poland has made great recent progress in well-being and is the top performer in converting growth into well-being; and Rwanda has made the greatest recent progress—albeit from a weak starting position.

Among major countries Brazil is one of the countries making the most of its economic growth in terms of converting it into well-being improvements. China is only converting its growth into well-being at global average rates … but that is quite remarkable considering its very rapid growth pace in recent years. As Figure 1 shows, the contrast between Germany and the USA provides a good illustration of the value of looking at well-being dynamics rather than just GDP growth. Between 2006 and 2013, both countries had similar low growth rates—averaging just over one percent annually—but Germany, like Brazil, generated well-being improvements that would have been expected of a country growing much faster while the USA was not even improving well-being at a rate commensurate with its economic growth.

Figure 1: The U.S. and Germany grew at the same rates but converted this growth to well-being at different rates, 2006- 2013 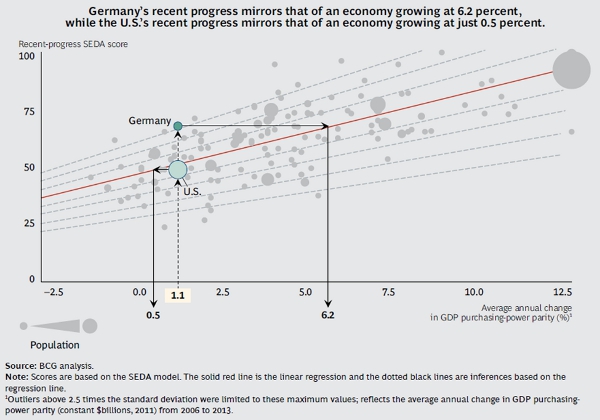 It is clear that economic growth is a necessary condition for major improvements in well-being but also that it is far from sufficient. There is much that can be learned from countries that are performing well in converting wealth and economic growth into well-being. Establishing where gaps exist with respect to peers can guide the setting of priorities and identifying comparable countries with better performance can point to the development of strategies to address those gaps. And it is not all about expenditure: while some key investments require major budget outlays, some policies that result in greater well-being do not have to be costly.

Finally, a warning flag from our analysis is that sustainable progress in well-being is more difficult to achieve than short-term economic growth and that countries with weak sustainability find it hard to reduce that gap. This underscores the importance for leaders and policymakers across the globe to implement, within their development strategies, the institutional foundations that form the basis of long-term sustainability.

This article is based on the report ‘Why Well-Being Should Drive Growth Strategies’, the 2015 Sustainable Economic Development Assessment, from The Boston Consulting Group.

Note: This article originally appeared at our sister site, USAPP – American Politics and Policy. It gives the views of the author, not the position of EUROPP – European Politics and Policy, nor of the London School of Economics. Featured image credit: Simon Cunningham (Flickr, CC-BY-2.0)