Portugal was one of the countries hardest hit by the Eurozone crisis, yet in contrast to countries such as Greece and Spain, there has been no sharp rise in support for radical left or anti-establishment parties. Ahead of the next Portuguese legislative election on 4 October, Alexandre Afonso writes that there are a number of possible reasons why a surge in radical-left support has failed to materialise, including Portugal’s pre-crisis economic trajectory, and the fact that the centre-left Socialist Party has managed to escape taking the blame for the country’s economic situation.

The next Portuguese legislative election is scheduled for 4 October, and compared to the fierce battles fought between establishment parties and anti-austerity challengers in other countries, it looks fairly sedate. The latest polls indicate a close call between the PSD/CDS-PP coalition (currently in power) and the Socialist Party. These are the parties that have alternated in power for the last 30 years. Among the Southern European countries which have been severely hit by the Eurozone crisis, Portugal is the only one where the party system has not undergone significant change.

In the context of significant cuts to social programmes and public sector wages, the Socialists have been leading the polls for most of the current parliament, but the decision of the two right-wing parties in power to run together have put them back in the race. It is now unclear whether any of them will be able to secure a majority in Parliament, but their electoral support has remained fairly stable in spite of a fairly dire economic situation.

Some timid signs of recovery are visible, but high unemployment, low productivity and a huge demographic problem (low fertility and high emigration) still constitute major stumbling blocks on the path out of the crisis. In this context, what really sets Portugal apart is the ability of the centre parties to maintain fairly high levels of electoral support and contain the left-wing surge observed elsewhere.

While Syriza and Podemos have polled at 35 per cent and 20 per cent respectively, the Left Bloc (their Portuguese equivalent) has hovered around 5 per cent, with the Communist Party doing somewhat better at 10 per cent. Meanwhile, the Spanish centre-left PSOE had fallen down to 20 per cent in July 2015, while PASOK had collapsed below 5 per cent. The Portuguese Socialists, in contrast, have maintained support around 35 per cent. 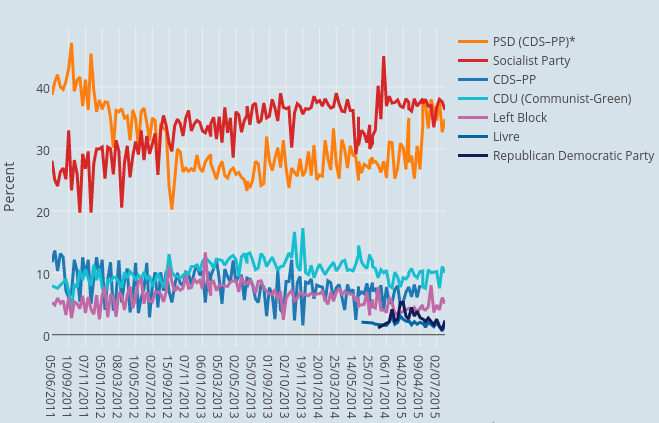 In Greece and Spain, Syriza and Podemos have capitalised on popular opposition to austerity measures and high unemployment. They have become serious challengers to traditional centre-left parties, who have had a very hard time reconciling left-wing ideals with EU-backed austerity. In fact, in Greece PASOK, once the largest and best organised Greek party, has been reduced to a marginal political force after backing cuts that severely hit its electorate.

Figure 2 shows indeed that in Greece, Spain and Portugal, there is a clear relationship between the left-right position of parties and their position on European integration, the latter being associated with cuts in spending and the retrenchment of the state. However, the centre of gravity of the party systems differ: the Eurosceptic left (in Greece and Spain) and the Eurosceptic right (in Italy) are strong contenders to the mainstream parties in Italy, Spain and Greece, while they remain relatively small in Portugal. How can we explain this? 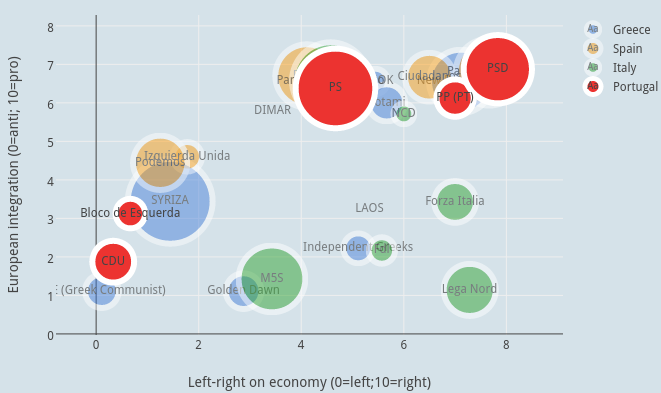 There are a number of possible reasons for why Portugal hasn’t seen the kind of left-wing surge that other comparable countries have undergone in the last couple of years. The first may have to do with the economic trajectory of these different countries: an economic boom in the pre-crisis period allowed for clientelistic strategies by major parties in Greece and in Spain, which had to be stopped suddenly when the crisis hit. Voters sanctioned these swings severely. In contrast, Portugal has faced a period of long stagnation since its entry in the Eurozone: change was not as sudden, and austerity had started much earlier.

Second, in contrast to PASOK, who had to implement harsh austerity measures in a coalition with New Democracy, the Portuguese Socialists have managed to escape the blame by leaving power when the country was bailed out in 2011. A change of leadership also made it possible for the party to dissociate itself from its period in office. The new leader is now Antonio Costa, the popular former mayor of Lisbon, while the former prime minister José Socrates now sits in jail under corruption charges.

The third reason is the small political space left by the Communist party for a left-wing challenger. In spite of its modest size and fairly old-school discourse, it has traditionally been well organised and enjoys a trustful electorate, making it difficult for a new political force to mobilise voters on that side of the political spectrum.

Figure 3: Interest in politics in Italy, Portugal and Spain (2014) 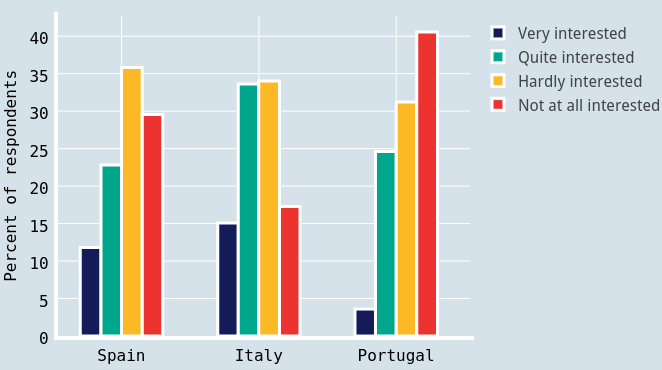 Finally, a major factor that underpins the absence of a populist surge in Portugal is the generally low degree of politicisation of voters. Data from the most recent wave of the European Social Survey reveals that Portugal had higher proportions of voters who had no interest in politics (Figure 3) than Spain and Italy (we do not have data for Greece). However, trust in politicians was at similarly abysmal levels. We can hypothesise that unhappy but politicised voters will choose challenger parties (voice), while unhappy but apathetic voters will abstain (exit). Considering very high levels of abstention (and emigration), it is this second strategy that seems to prevail in Portugal.

Alexandre Afonso – Leiden University
Alexandre Afonso is an Assistant Professor at the University of Leiden, Netherlands. His research interests are labour market and austerity reforms in Southern Europe, the role of populist right-wing parties in welfare reforms, and the political economy of immigration. He is on Twitter @alexandreafonso 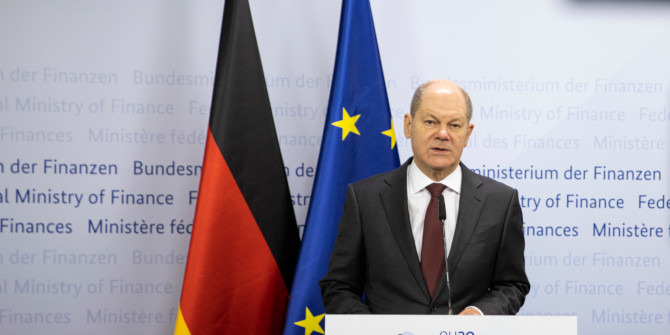