EU ministers are due to meet on 14 September for an emergency summit on the ongoing migration crisis. Ruben Zaiotti writes that the real focus of the meeting should be on addressing the root causes of migration. He argues that while many of the factors underpinning the migration crisis, such as instability in the Middle East, are impossible to solve in the short-term, this should not be used as an excuse to avoid discussing what Europe can do to reduce the likelihood of future crises from occurring.

It has become a well-established European ritual. What to do when facing a major crisis? Call a special summit! Then talk, and talk again, well into the night. Disagree on pretty much everything, until you get a ‘breakthrough’ – i.e. a list of generic commitments dressed up in the language of the mythical “European common spirit”. Wait a few months, and, if the plan does not work – because it surely won’t work – call another summit!

The latest instalment of this ongoing European political saga is centred on the issue of migration: a hot topic of late, and for good (or, I should say, bad) reasons. Europe has become the backdrop for harrowing, and often tragic, stories of thousands of individuals who are fleeing conflict and misery and trying to reach the Old Continent. Some of these stories, such as that of Alan Kurdi, the Europe-bound three old Syrian who drowned just before reaching the Turkish coast, are so shocking as to shake, at least temporarily, the conscience of an otherwise anaesthetised European public. At the same time, a collective anti-immigrant hysteria has spread throughout the Old Continent like wildfire, pushing migration to the top of the political agenda. What to do in these circumstances? European leaders have an answer. Yes, you guessed it: a special summit.

I am not holding my breath that something revolutionary will come out of the latest gathering of European grandees. Most likely, the summit will result in a declaration acknowledging the plight of European-bound migrants and a call for action. My sense is that, in practice, the planned response will be filled with a new batch of security-oriented measures aimed at strengthening the continent’s external borders and at expanding controls on movement within Europe.

And the plight of would be migrants, who will still do whatever it takes to look for a better future? Well, we’ll figure that out later. Remember Lampedusa? The infamous October 2013 migrant shipwreck led to alarmed calls for action similar the ones we hear today. Cecilia Malmström, then European Commissioner for Home Affairs, said: “Let’s make sure that what happened in Lampedusa will be a wakeup call to increase solidarity and mutual support and to prevent similar tragedies in the future”. We all know how things turned out…

It is, of course, easy to target elected officials. They are the ones who must make the difficult decisions, and feel the wrath of an angry and disillusioned electorate. And the internally-focused policy responses European leaders will likely propose to address the current crisis – a greater burden sharing of refugees among European countries and a more flexible approach to the refugee determination process – are indeed necessary. They are, however, also a patchwork of short term solutions that will do little to prevent other crises from popping up again in the near future.

The alternative? I have one. Go to the source of the problem. In other words, try to make sure migrants either do not leave their country of origin, or, if they do leave, they do so in a regulated manner. Easier said than done, you might say. You can add naïve. And haven’t Europeans already tried this route before? These are valid points. Solving the complex economic, social and political problems that encourage emigration in faraway places, not to mention ending protracted conflicts such as the one in Syria, is not something Europeans (or anybody else for that matter) can – and should – do by themselves, nor something that can happen in the short term.

Talks about creating a more ‘progressive’ migration policy that includes not only sticks but also carrots – fostering economic development, the opening up of legal migration channels – have been going since the late 1990s, when Europe was facing another major refugee crisis originating from the conflict in the Balkans. These themes, for instance, are a central component of the EU’s Global Approach to Migration and Mobility: since the mid-2000s the main policy framework of EU external migration and asylum policy.

The problem is, European policy-makers have not seriously tried to put into practice the progressive vision that this approach entails. When it comes to its implementation, the emphasis has systematically turned to the negative aspects of the plan – how to prevent migrants from arriving – not the more positive ones – how to create incentives to either stay or move through official channels. This is apparent if we look at European attempts to ‘externalise’ migration management to the continent’s neighbours or further afield. These ‘remote control’ policies include the ‘offshoring’ of border checks beyond Europe, the imposition of stricter visa requirements, the processing of asylum claims in neighbouring countries, the interdictions of migrants on the high seas, and migrant detention in transit countries outside the region.

The externalisation of border management is not a new phenomenon. Some of these practices (e.g. the imposition of visas) date back to the origins of immigration policy at the turn of the 20th century. Other initiatives (e.g. the interdictions on the high seas and migrant detention) were introduced in the post-cold war era. Since the millennium, however, these practices, and the context in which they unfold, have experienced significant transformations. As a result, remote control policies have become more complex, widespread and prominent in migration strategies around the world than ever before. These practices, for example, are at the core of current migration policies in the United States and Australia.

For governments, externalising migration policies represents a politically expedient way to circumvent domestic legal obligations that liberal democracies claim to uphold. As the adage goes, out of sight, out of mind… The upcoming European summit on migration will probably include a discussion on how to strengthen these ‘externalising’ practices.

This approach, however, is, to put it mildly, contentious. Besides the lack of accountability for governmental actions that occur beyond national borders, externalising migration controls often have negative repercussions on migrants’ lives and their rights, as in the case for those kept in limbo in offshore detention centres. It is also questionable whether they are really effective. Yet, despite the mounting critiques and number of challenges governments are facing, these policies remain a popular approach to managing international migration in Europe.

Which leads me to the point about the elephant in Europe’s living room – namely, the root causes of migration. Certainly, some of the situations that lead to population movements (e.g. instability and conflict in the Middle East, authoritarianism and lawlessness in the Horn of Africa) are so intractable that even talking about ‘solutions’ seems out of the question at the present time. This state of affairs, however, should not be an excuse not to talk about what Europe can and should do to render less likely the re-occurrence of the current crisis, or at least mitigate its size and impact. The upcoming European summit should put the root causes of migration at the core of its plan of action.

There is no need to reinvent the wheel. Some of these ideas are already present in Europe’s existing policy frameworks. This is especially the case for plans targeting countries where migrants move primarily for economic reasons. Europe should more actively foster local economic development, render its common market more accessible and offer more meaningful channels for legal migration. In the case of individuals fleeing conflict and political repression, Europe should offer greater economic support for transit countries, and expand its now limited commitment to resettle displaced people living in refugee camps. European leaders should also seek greater coordination and support to implement these policies not only within Europe, but also with other international partners, especially in North America.

Putting these ideas into practice requires not just time and money, but also a great dose of political will and courage, qualities that are currently in short supply around European capitals. Without them, however, I’m afraid the images of desperation and anger that we are witnessing today across Europe are likely to haunt us for a long time to come.

Note: This article originally appeared at Ruben Zaiotti’s personal blog. It gives the views of the author, not the position of EUROPP – European Politics and Policy, nor of the London School of Economics. 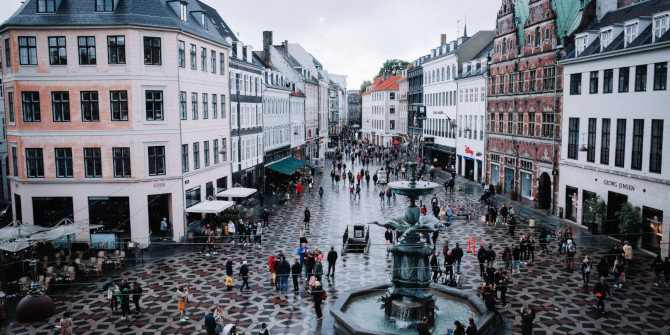 The state of Denmark: What voters can tell us about the future of the Danish ideal