Catalonia will hold parliamentary elections on 27 September, with a number of Catalan politicians presenting the elections as an effective vote on the territory’s independence from Spain. Mireia Borrell Porta writes that two issues in particular are at the heart of the debate over independence: fiscal redistribution within Spain and Catalan identity. She notes that while the Spanish government has rejected the idea that the elections are a de facto vote on independence, the result will go some way to indicating the views of Catalan voters on the issue.

Catalans will go to the polls on 27 September in regional elections that the Catalan president has insisted have the characteristics of a plebiscite on Catalonia’s independence from Spain. Regardless of whether it is a plebiscite in the strict sense of the word – something that the Spanish government, alongside other actors, denies – the coming elections will be a tipping point, a very fine proxy of the actual support that the idea of an independent Catalonia has within the Catalan population.

At the core of the debate, two issues stand out: fiscal redistribution and Catalan identity. While they seem to be, in principle, feasible to solve within Spain, the continued failure to address them and find a solution deemed satisfactory by the two parties has led a significant part of the Catalan population to think that secession is the only alternative.

With a population of 7.5 million people, Catalonia is one of the richest regions in Spain, after Madrid, the Basque Country and Navarre, measured in GDP per capita. It is for this reason that when Catalans claim that fiscal redistribution is one of the most important topics on the agenda, it raises eyebrows. To understand the economic argument for independence it is necessary to provide an overview of Spain’s system of fiscal redistribution with a focus on the two main economic complaints that have shaped much of the debate on Catalan independence.

How much is enough?

The allocation of income and expenditure between central and regional governmental levels is one of the key tasks a federal government has to undertake. As Núria Bosch explains, the end result is usually a fiscal imbalance among different governmental units. Vertical fiscal imbalances take place when there is an aggregate negative gap between regional revenues and the level of expenditure allocated to them. Horizontal imbalances take place when different regions – or more generally, different units at the same governmental level – end up with gaps between revenues and expenditure of different magnitudes. This could happen for several reasons: regions could have different tax bases, different costs in the provision of public services or different provision needs, to name a few.

Countries usually deal with such imbalances using a system of transfers between the central government and regional governments as well as between regional governments. It is precisely this transfer system that has created tension among the proponents of Catalan independence. Historically, these transfers have lacked a coherent logic. This has led to a situation in which the regions with the higher fiscal resources have ended up having fewer resources per capita after redistribution than regions which had initial lower fiscal resources.

The new financial model from 2009 does achieve more convergence across regions, but it does not solve the problem. This is illustrated in the table below. The first column shows the fiscal resources of each region compared to the average (100), where we can see that Catalonia is the third region in resources per capita. The second column shows the available resources after redistribution, and it can be seen that Catalonia is slightly above the average, but falls to the ninth place (out of fifteen – the Basque Country and Navarre are not part of this common fiscal system). Catalans have repeatedly asked for a change in the system so that the rank of the regions is not altered after redistribution, but to no avail. 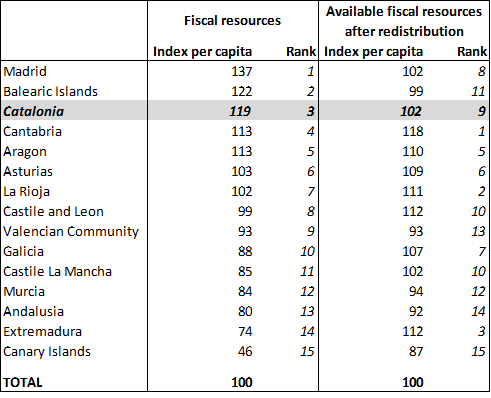 Infrastructure investment in Spain: who gets what and why

The regional allocation of infrastructure investment can follow several criteria. Research on the determinants of regional infrastructure investment differentiates between at least two economic criteria and two political ones. The economic criteria are efficiency and equity. The efficiency criterion suggests investment be centred in regions with high project impact. Conversely, the equity criterion proposes that the focus of investment should be in regions with low output levels, in order to achieve convergence.

With regard to the political criteria, the first criterion specifies that political productivity plays a large role in deciding the allocation of investment: i.e. a high proportion of spending is made in regions with high political and electoral profitability. The second political criterion suggests that rather than being the political capital of the moment, what matters are the broader political objectives that the central government has in mind. An example provided by the proponents of this criterion would be the broader aim of economic centralisation that a state may have.

This aim, as Germà Bel has argued, is not recent, and in fact it goes back to the 18th century when the road network became radial to serve the interests of the monarchy. The 19th century saw the radialisation of the railway network, again to serve the interests of the monarchy as well as the military. The outcome has been a country with a radial transport network and very asymmetric regional public investment, with regions closer to the centre receiving the highest ratio of road and railway investment per GDP, ignoring all calls to invest according to efficiency or equity criteria.

Regardless of whether one agrees with the above interpretation, the truth is that public infrastructure investment in Catalonia has been systematically lower than the percentage of Catalan GDP over Spanish GDP (around 19 per cent) and lower than the percentage of the Catalan population over the Spanish Population (15.4 per cent in 1999 and 16 per cent in 2008), as the chart below illustrates. GDP and population percentages seem to be logical criteria to assess the level of public investment, given that all citizens should have a similar level of public infrastructure across regions.

Chart: Percentage of central government investment in infrastructure in Catalonia 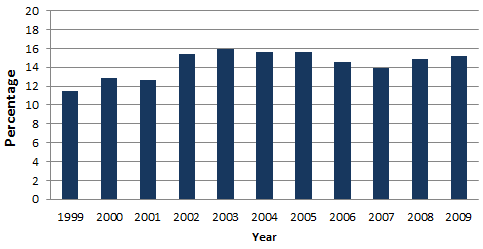 An economic argument with political roots

A few years ago the now proponents of Catalan independence joined forces to write a new Catalan Constitution called ‘Estatut de Catalunya’ which proposed a mechanism to solve the two economic problems outlined in this article. The new ‘Estatut’ received the support of the Catalan Parliament, the Catalan people through a referendum and the Spanish Parliament. However the Constitutional Court ruled many of the articles as unconstitutional, including those aimed at tackling these two economic problems. Since then, the pro-independence movement has not stopped growing in numbers.

This has arguably been the turning point that has convinced a large part of the Catalan population that a solution to the economic woes that affect Catalonia is not politically feasible within Spain. And the same feeling arises when it comes to discussions on identity. At this point, it might be pertinent to ask whether both the economic and identity arguments for independence conceal in fact a deeply-rooted political tension which, to date, has proved insurmountable.

Or, as Germà Bel has put it: ‘when relationships lack mutual respect and are only based on material interests, all that is received is too little and all that is given is too much. In those cases, only one thing is clear: the relationship does not work, and, therefore, the time to make decisions has come’.

Mireia Borrell Porta is a PhD candidate at the LSE’s European Institute.