How influential is the UK in EU decision-making? In the third in a series of articles, Simon Hix presents evidence on the countries EU member states choose to cooperate with during negotiations in the Council of the European Union. He writes that UK officials appear to be the best connected of all the member states’ officials, with more member states indicating that they choose to work with the UK than for any other country. Overall, the data suggest that the UK is at the heart of EU policy-making alongside larger states such as Germany and France.

This is the third in a series of articles on whether the UK is “marginalised” in the EU. Whereas the first article looked at EU policy outcomes and the second looked at voting in the EU Council, this one looks “behind the scenes”: at connections between government officials in the EU’s committees and working groups. Are UK civil servants at the centre of EU bargaining – at the “top table” – or are they on the periphery?

The data for this analysis come from 869 interviews by Daniel Naurin, at the University of Gothenburg, and his research team between 2006 and 2012. Daniel and his researchers asked a simple question to each member state’s official in the same 11 committees and working groups in the EU Council: “Which member states do you most often co-operate with in order to develop a common position?”. The answers reveal which governments tend to work together in EU negotiations, and as a result which governments are better connected than others. Also, as the research was conducted in 2006, 2009 and 2012, it is possible to look at whether there have been any major changes since the Eurozone crisis and the growing Brexit debate. 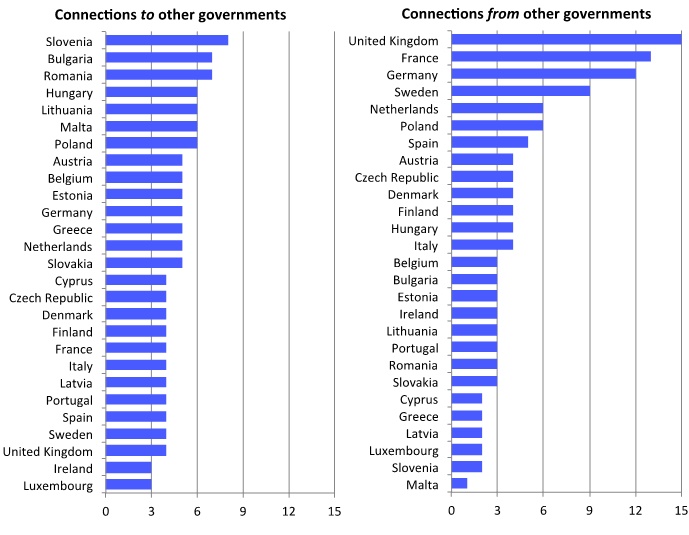 The centrality of the UK, along with the other large member states, is clearly revealed in the number of officials from other EU governments who mentioned the UK (in the figure on the right). Measured this way round, the UK’s officials are the most well connected of all the governments. In fact, the officials of only 6 other governments (out of 26 others) did not mention the UK as the main government they co-operated with in their working group in either 2006, 2009 or 2012: Greece, Italy, Luxembourg, Portugal, Cyprus, and Romania.

Not surprisingly, France and Germany, as the other two most powerful member states, were the second and third most mentioned by officials from other governments. Interestingly, though, amongst some of the smaller member states, several of the UK’s traditional allies (Sweden, the Netherlands, and Denmark) are also central players in EU negotiations.

Figure 2: Changes in connections over time (click to enlarge) 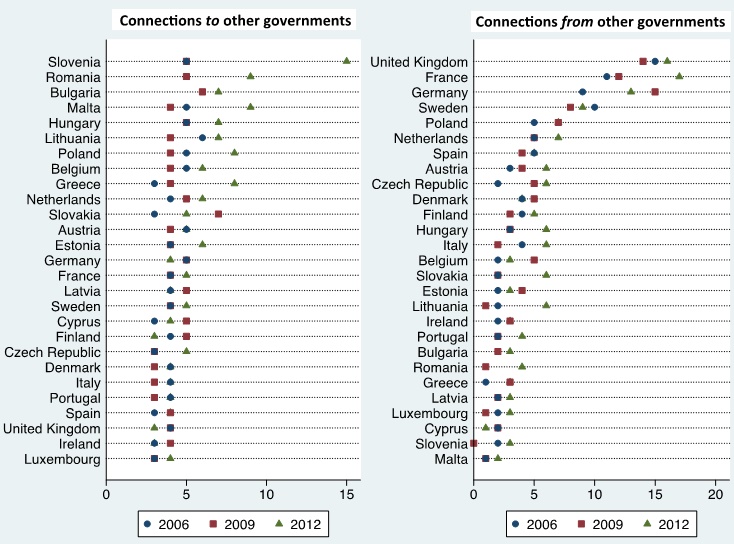 Figure 2 shows the breakdowns for 2006, 2009 and 2012 separately. The UK’s position has been stable across this period, both in terms of connections from other governments to the UK (on the right) as well as UK connections to other governments (on the left). If anything, the number of governments connecting to UK officials increased between 2006 and 2012. Overall, the main change between 2006 and 2012 has been the increase in the number of connections made by officials from some of the newer member states (such as Slovenia, Romania, Malta and Poland) to governments from the other member states. In short, not much has changed (yet) in day-to-day EU negotiations since the Eurozone crisis. 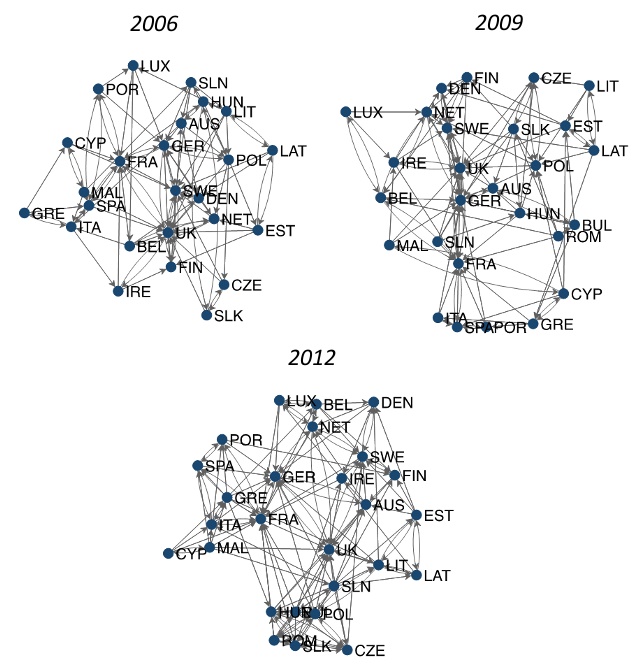 In other words, when it comes to negotiations behind the scenes, before votes take place and before laws are adopted, the data suggest that the UK government is right at the heart of EU policy-making, and certainly at the top table, alongside Germany and France. The data also suggest that the Eurozone crisis has not had any noticeable effect on the centrality of the UK in EU bargaining.

As ever, though, there are some caveats. I have only focused on the “first” other member state each official mentioned (although looking at the second, third and fourth mentioned member states does not affect the conclusions). I have also not looked into connections in particular policy areas, and the UK clearly cares about some policy areas more than others. And, for a full picture of the UK’s position in EU politics, these findings need to be considered alongside other results.

Note: This article also appears at The Guardian, UK in a Changing Europe, and the LSE’s Brexit blog. It gives the views of the author, and not the position of EUROPP – European Politics and Policy, nor of the London School of Economics.