What impact could the UK’s EU referendum have on the issue of Scottish independence? As Jan Zurawski writes, several commentators and political figures have claimed that if the UK were to leave the EU, Scotland may follow suit by opting to leave the UK in a second referendum. However he argues that while Scots are the most pro-European Brits, this will not necessarily translate into substantially increased support for independence due to the volatility of opinions during referendums.

In her speech on June 2, Nicola Sturgeon put a spotlight on a previously neglected aspect of the United Kingdom’s potential exit from the European Union – namely the country’s unity. The leader of the Scottish National Party (SNP) boldly claimed that a Brexit might very likely lead to a yet another Scottish independence referendum.

It would seem that following the explicit, albeit narrow, outcome in favour of remaining within the Union in the most recent Scottish independence referendum, the issue of secession would lose its political and public prominence, at least in the medium term. After all, as plainly stated by Ms Sturgeon herself, the only basis for another referendum would be “strong and consistent” public support for Scotland’s separation – and that underpinning certainly did not seem to be on the horizon to justify a new vote anytime soon.

For the First Minister of Scotland, however, Brexit would inevitably push the topic of Scottish independence right back to the top of the UK’s political agenda. Philip Stephens of the FT goes even further and asserts: “The union of the United Kingdom would not long survive Brexit”. Are they right in holding such views? In the author’s opinion, there are two key problems with their reasoning.

First of all, it relies on a rather feeble assumption that Scots will vote in favour of remaining in the EU. In such case, Ms Sturgeon believes, a Brexit would essentially violate democratic principles by forcing a decision against the will of the Scottish people. Consequently, it would inevitably turn the public opinion in the United Kingdom’s northernmost nation in favour of seceding and regaining the privilege of full national self-determination.

Interestingly, Ms Sturgeon has already attempted to safeguard against such outcome by trying – and ultimately failing – to convince David Cameron to include a “double majority” provision in the EU referendum. Under such rule, Brexit would not only be conditional upon the majority of UK’s citizens voting in favour of it, but would also require that UK’s withdrawal from the EU is supported by the majority within each of the UK’s four nations – including Scotland. One could wonder if such a rule would indeed be in line with democratic principles that Ms Sturgeon so eagerly fights for. After all, “double majority” in this case would effectively mean that some votes carry slightly larger weight than others.

Let us return though to the essence of SNP leader’s assumption, i.e. that Scots will most likely vote in favour of the UK remaining a member of the EU. Polls do seem to support her thesis. A study conducted by the British Election Study team in mid-September amongst 3,500 people in England and 1,000 each in Scotland and Wales indicates that Scots are the most pro-European out of the three by a noteworthy margin (as the figure below demonstrates).

So far, so good. The thing about public opinion when it comes to referenda though, is that it may be extremely volatile. For evidence, one does not have to look much further than last year’s referendum on Scottish independence, for which support grew from just 33% in August 2013 up to 50% (or even more at times) in the weeks immediately before the vote.

Figure: Polling on EU membership in England, Scotland and Wales 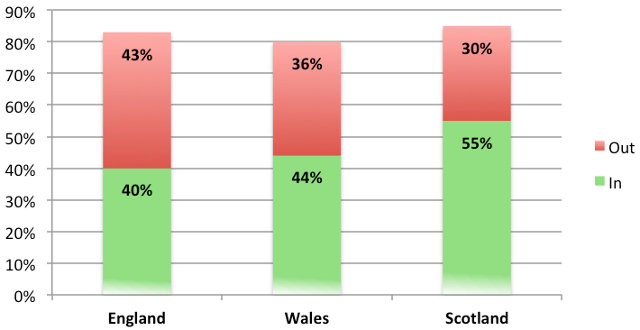 Ultimately, as history has shown, referenda outcomes are highly unpredictable. When it comes to the EU-related referenda specifically, the experience of the UK in 1975, as well as that of countries such as Denmark, Switzerland and Sweden over the past 25 years, further suggests that final results can be anything but anticipated.

Taking this into account, any outspoken conviction about Scots ultimately voting against a Brexit must be met with a dose of scepticism. This is especially the case when one acknowledges that the date of the EU referendum has not even been set yet and the renegotiation has only just begun. Predicting outcomes at this stage then is truly nothing more than an educated guess, which may easily turn out to be incorrect. If a Brexit indeed occurs, it may very well be that it is with the support of a Scottish majority. In such case, the impact of Britain’s withdrawal from the EU would have a minor impact on the campaign for Scottish independence.

The second problem with Ms Sturgeon’s argument is that she exaggerates the extent to which Scots will “inevitably think [that] perhaps it’s time to be independent so that we can preserve our membership in the EU”, if a Brexit indeed occurs in spite of Scottish citizens’ contrasting position. Such reasoning rests on a shaky foundation, which requires that pro-EU Scots in large numbers will build up a strong commitment to independence in the immediate aftermath of announcing a Brexit.

That may not necessarily be the case. A Euro-enthusiastic voter may value Scotland remaining a part of the UK’s union more than the UK staying in the European Union. People prioritise among their political beliefs and many of the Scots who take part in the EU referendum may not attach as much importance to their EU membership as they do to the stability of the UK’s union. It does not follow then that those who are pro-Union and pro-EU will seamlessly change their view on Scottish independence in the event of UK’s withdrawal from the EU. Ms Sturgeon’s prediction ignores the complexity and layers of people’s commitments to various political identities and values.

Ms Sturgeon speaks with sense when she proclaims that another referendum on Scottish independence can only be held if there is a “strong and consistent” support of the majority of the electorate for leaving. At the moment that support is anything but the above. Whether it will become so in the aftermath of announcing a Brexit is incredibly difficult to determine, at this stage, as it depends on a whole network of dynamic and interconnected factors. This is not to say that the UK’s withdrawal from the EU will certainly have little impact on the country’s political and territorial unity. But those who equate a Brexit with an inevitable breakup of the UK should carefully reassess their conviction.

Note: This article originally appeared on the LSE’s BrexitVote blog. It gives the views of the author, and not the position of EUROPP – European Politics and Policy, nor of the London School of Economics. Featured image credit: Brian Smith (CC-BY-SA-2.0)

Jan Zurawski
Jan Zurawski is a Freelance Contributor at the Economist Intelligence Unit, where he covers the latest political, economic and financial developments in Poland, Ukraine and Estonia. He is a graduate of SOAS and the Global Politics programme at the LSE.