What does 2016 hold in store for efforts aimed at strengthening Europe’s Economic and Monetary Union? Benedicta Marzinotto writes that when compared with previous monetary regimes, the euro area remains unstable and in need of reform. She argues, however, that the lack of political appetite for cooperative solutions implies a sovereign default is possible in Greece this year and potentially elsewhere in the Eurozone.

The EU is unlikely to make much headway in 2016. Not only are emerging markets catalysing everybody’s attention, but as some EU member states have started to recover, political appetite for reform is fading away. The deepening of EMU will remain an empty shell. This raises the question of whether the euro area is a monetary union or just a special type of fixed exchange rate regime similar to the Gold Standard or the Bretton Woods system.

Such a debate has in fact started some time ago. For most commentators the introduction of capital controls – albeit contingent and limited to the two cases of Cyprus and Greece – contradicts the very principle of having a monetary union. The same applies to the fact that the euro area lacks a common fiscal capacity, which is what would allow a league of countries that have given up standard monetary tools to withstand large negative shocks.

And yet, juxtaposing EMU to a “modern gold-standard type, fixed-exchange rate system” is missing the point. We are left with something far more flawed and precarious than the Gold Standard and Bretton Woods ever were. Previous regimes were consistent from an institutional point of view in the sense that the risks of the time were fully insured. The same is not true for EMU. The risks the euro area is exposed to are systemic, but they are not covered by an effective insurance mechanism, exception made for the Outright Monetary Transactions (OMT), which will never be activated.

In the late nineteenth century, capital mobility under the Gold Standard was unconstrained just like in the euro area, but capital flows were based on commodity money. It follows that credibility was less important than under the current fiat money system. As a result, capital flows were most often stabilising rather than destabilising. Moreover, cross-border ownership of assets was limited, switching off one potential channel of crisis contagion.

As a consequence, credit (or sudden stops) risks were moderate and mostly individual and so was the available insurance, which consisted of national gold reserves compounded with ad hoc cooperation amongst the large central banks of the world. Beyond credit risks, each member feared convertibility. To the extent that this was a beggar-yourself policy more than anything else, collective insurance against the risk of abandoning the peg was unnecessary. All in all, the regime was incentive-compatible as illustrated by the table below. 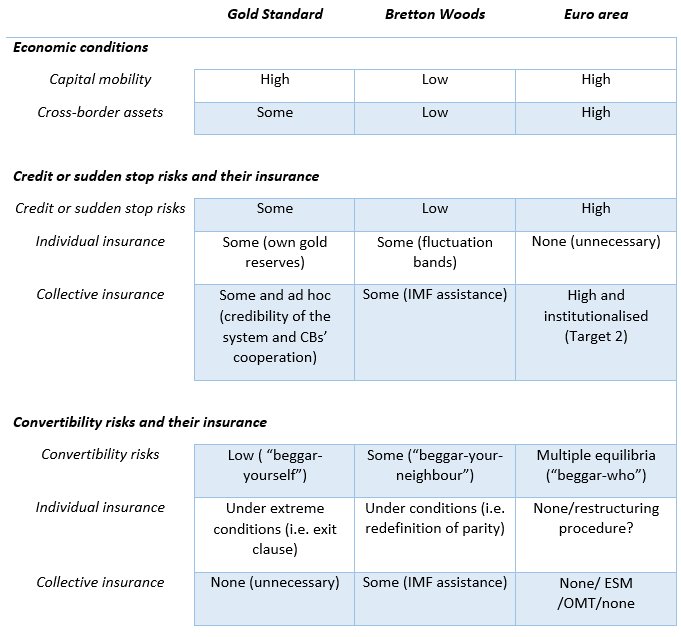 Also Bretton Woods was internally consistent from an institutional point of view. Given capital controls, credit (or sudden stops) risks were small. As exchange rates were fixed but adjustable and members retained autonomy in economic policy, convertibility risks were also small but not absent. The IMF was indeed created to prevent default and beggar-your-neighbour devaluation. Such risks were tangible mostly falling on creditors, which happened to be also export-led economies interested in preserving their world trade shares. In this respect, financial assistance via the IMF was a perfect type of insurance because countries paying into the system were insuring themselves against default and devaluation from part of their partners, as shown in the table.

The euro zone does not benefit from the same institutional consistency. It is characterised by high capital mobility including cross-border ownership of assets. This poses enormous credit (or sudden stops) risks. These are insured via Target 2. On the other hand, convertibility risks have not been fully eliminated and remain driven by multiple equilibria as a country’s destiny depends on the perception that financial markets have of their capacity to access credit. A collective insurance against such risks had not been foreseen at Maastricht and was initially provided through various financial purpose vehicles now merged under the European Stability Mechanism (ESM). These are limited in size, thus representing partial insurance. Only the OMT promised to provide full insurance against convertibility risks; yet the programme seems to already be a dead letter.

EMU is not like any fixed exchange rate regime. Institutional inconsistency makes the euro area more unstable than any previous rule-based monetary regime. On the back of multiple equilibria, having a flawed fiscal union is certainly not enough and probably worse than no fiscal union at all. The lack of political appetite for cooperative solutions implies that we are heading this year for sovereign default(s) where public finances are in distress and economic growth remains weak. Looking ahead, a clear scheme for debt restructuring would at least eliminate uncertainty and leave member governments ultimately responsible and accountable for public debt management, for better or worse.

Note: This article builds on a book chapter by the author in the forthcoming book, Political and Economic Dynamics of the Eurozone Crisis (edited by James A. Caporaso and Martin Rhodes). The article gives the views of the author, not the position of EUROPP – European Politics and Policy or the London School of Economics. Featured image credit: Mike Steele (CC-BY-SA-2.0) 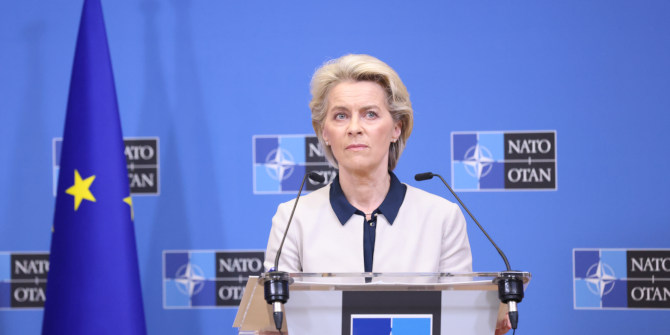 The two faces of Germany: how Germany’s support for refugees could counteract criticism of its handling of the Greek debt crisis