The integration of migrants and refugees into European societies presents a challenge for EU states, but are there also opportunities afforded to Europe by the current refugee crisis? Based on the Bertelsmann Stiftung’s Social Justice Index (SJI) report, Kim Wellmann writes that swift integration policies could transform the crisis into an opportunity for Europe to address demographic issues within EU economies and promote inclusive growth.

The 2015 Bertelsmann Stiftung’s Social Justice Index (SJI) report, which examines the state of social justice in EU countries across six dimensions, shows that while EU countries have at least proven able to prevent a further erosion of social justice over the last year, prevailing social and economic inequalities are having a negative impact on the social cohesion of European societies. The chart below shows how each of the countries in the EU rank in terms of their Social Justice Index score in 2015. 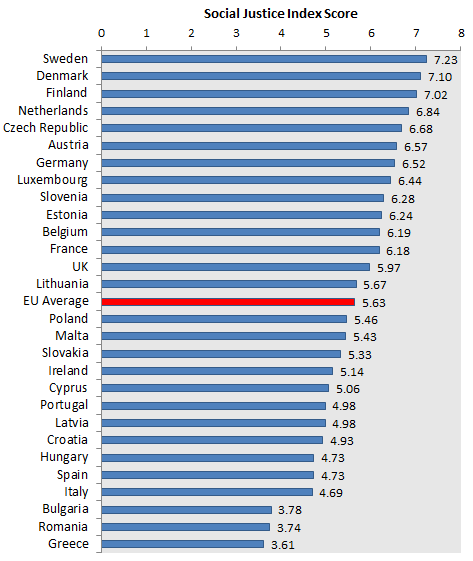 Note: For information on the calculations see the full Social Justice Index (SJI) report by the Bertelsmann Stiftung.

One of the six dimensions examined by the SJI, ‘social cohesion and non-discrimination’ is a key factor that has the potential to transform the current refugee crisis into an opportunity with benefits for all. Indeed, the development and implementation of effective anti-discrimination legislation and integration and migration policies are central to fighting societal inequalities and ensuring stable social conditions and participation opportunities, while promoting sustainably inclusive growth. Tapping the educational and vocational potential of migrants can help compensate for the negative effects of aging societies.

The SJI report emphasises the need for sound policymaking that includes “equal access to the labour market and education, opportunities for family reunion and political participation, the right of long-term residence as well as effective pathways to nationality”. How well are the EU countries meeting these goals? A quick look at Sweden and Spain sheds light on how countries with different economic contexts address these issues.

In addition to unemployment and equality, the country experts of the Bertelsmann Stiftung’s Sustainable Governance Indicators (SGI) project, in the context of which the Social Justice Index was developed, identify integration as a key challenge for Sweden. Although Sweden is the top performer in the SJI 2015 report, the experts note that a “comparison with other countries in this respect is not satisfying,” ranking the country 5th in terms of integration policy. Facing a high rate of immigration, Sweden pursues a comparatively benevolent migration policy comprised of various measures that include language training and housing.

Nevertheless, impediments to integration are larger in Sweden than in other countries which the SGI country experts attribute to “societal obstacles” and shortcomings “in the design and implementation of its integration policies.” Sweden’s migrants struggle with educational attainment and access to the labour market, which puts them at a disadvantage in terms of economic independence. As a result, successful integration and societal acceptance is more elusive for Sweden’s migrants than it is for migrants in other comparable countries.

Underscoring the extent to which high unemployment among migrants counteracts integration measures, the SGI country experts state that Sweden “has proven to be exceptionally inept at this aspect of integration.” According to the experts, Sweden “needs to address the issue of making societal governance more integrative.” With regard to non-discrimination, Sweden achieves a commendable number one ranking, as it does not tolerate discrimination of any kind. Nevertheless, wage gaps between migrants and Swedes persist and ethnic segmentation is on the rise in several suburbs.

By comparison, Spain is still navigating its course as a relatively new destination country for migrants. Despite the country’s economic challenges and its rank of 23 overall in the SJI, Spaniards appear to be the most tolerant when it comes to “having immigrants as neighbours,” according to a 2013 report by the British think tank Demos. There are no relevant anti-immigrant parties in Spain, and violence against migrants is rare. According to the SGI country experts, this appears to be less a factor of successful integration policies than a tolerant culture.

In addition, most are first-generation migrants or Latin Americans with a specific cultural and linguistic affinity for Spanish culture, which facilitates their integration into society and the workplace. Yet, as stated in a 2013 report by the Spanish Observatory of Racism and Xenophobia referred to by SGI experts, “the peaceful integration of migrants coexists with a somewhat widespread support of the idea of preference for Spaniards when looking for a job or having access to social services.” Nonetheless, migrants have good access to the education system and can acquire the Spanish nationality with relative ease. As a result, Spain ranks 13th on integration policy in the Bertelsmann assessment.

With respect to anti-discrimination measures, Spain ranks similarly well in 12th place. Its relatively good marks in this regard can be attributed to the implementation of fast-track procedures for citizens and foreigners seeking protection against any kind of discrimination. The SGI country experts note that Spaniards generally express less apprehension regarding Roma and immigration than do other Europeans.

Whereas Sweden ranks high in the SJI and its integration policies are well developed, it must do more to protect social cohesion by ensuring equality of opportunity in the education system and access to the labour market. Spain, which ranks much more poorly in the composite index, is closing in on Sweden in terms of integration policy and non-discrimination, in large part due to its culture of tolerance.

These findings can prove useful for countries in Eastern Europe in particular as many of them have taken an adverse stance on migration – despite the fact that the region too is hit hard by the impact of demographic change. In order to effectively combat the negative effects of demographic change and take advantage of the opportunities inherent to the inflow of migrants, these countries need to adopt an open attitude towards migrants and create sound migration policies while fostering more integrative societies, thereby promoting inclusive growth.

Note: This article gives the views of the author, and not the position of EUROPP – European Politics and Policy, nor of the London School of Economics. Featured image credit: Meabh Smith/Trócaire (CC-BY-SA-2.0)