In Prime Ministers in Greece: The Paradox of Power, Kevin Featherstone and Dimitri Papadimitriou offer the first in-depth study of prime ministers and governments in Greece, covering the period since the fall of the Greek Colonels’ regime in 1974. Although the book does not provide the most up-to-date evaluation of the current debt crisis, it is a well-substantiated and compelling insight into the ‘paradox of power’ experienced by successive Greek prime ministers and their governments, writes Alexandros Nafpliotis. 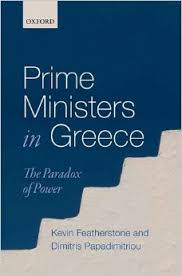 With Greece making the headlines more or less every other week in the last few years, and following his recent Twitter diplomacy debacle, the last thing Alexis Tsipras wanted to see was further speculation over his government’s reform efforts – this time sparked by a report in the German press accusing the Syriza-Independent Greeks administration of dragging its feet in implementing its bailout obligations. The prime minister’s office hit back at the report in the form of a strong-worded statementresponding to an alleged note from the German Embassy in Athens describing Greece as a ‘rudderless ship’.

The inability of successive Greek prime ministers to achieve key policy objectives is at the heart of this very opportune book. Prime Ministers in Greece: The Paradox of Power looks at the highly problematic case of Greece in order to analyse how a prime minister can establish control and coordination across their government.

As it is correctly stated in the book, this is ‘the first in-depth study’ of prime ministers and their governments in Greece during the period since the fall of the Greek Colonels’ regime in 1974, and as such, it comes to fill an important lacuna in the literature. Given their research expertise and their personal engagement, the authors are extremely well placed to conduct this study: Kevin Featherstone is Eleftherios Venizelos Professor of Contemporary Greek Studies and Director of the Hellenic Observatory at LSE and, quite importantly, was a member of an ad hoc advisory committee to a former Greek prime minister on this very subject matter; whereas Dimitris Papadimitriou (Professor of Politics, University of Manchester) has also had a long career researching contemporary Greek politics, as well as consulting PASOK (Panhellenic Socialist Movement) officials on core executive reform and contributing to the aforementioned advisory committee.

Continuing a partnership that was inaugurated in 2008 with The Limits of Europeanization, another case study of Greece’s recalcitrance in adapting to core European Union policies, the authors aim to expose ‘the fallacy of prime-ministerial supremacy’ in Greece, and thus illuminate (from the vantage point of the key actor) this ‘paradox of power’: namely, the fact that while the Constitution provides the prime minister with extensive powers, the operational structures, processes and resources around them undermine their ability to manage the government (a conclusion first presented by the authors in a 2012 journal article).

Featherstone and Papadimitriou have done a remarkable job researching and analysing all premierships of the last three decades of the twentieth century and the first decade of the twenty-first century, conducting interviews with all surviving PMs and all general directors in the PM’s office since 1974 (with the exception of 2004-09). The authors are particularly interested in ascertaining continuity and change in the Greek case, and they devote most of the book to trying to explain what they see as ‘an underlying continuity of weak performance in the essential tasks of managing the government’ (190). They are successful in identifying the constraints within government (lack of trust, low centralisation and coordination, no sense of community across or even within ministries, lack of access across networks and the politics of patron-client relations) across different premierships. They also stress that Greece is a case of frequently changing, but shallow impact, as resource allocation at the centre is problematic, and networks tend to be small, closed, personalistic and temporary rather than routinised or formal.

In terms of specific premierships, Konstantinos Karamanlis is blamed for lacking a structured, managerial perspective, and thus leaving a problematic legacy; Andreas Papandreou is accused of making erratic choices and operating a government full of inconsistencies, improvisations and false realities; Konstantinos Mitsotakis’s micromanagement style and promotion of his daughter are stated as reasons for the fragmentation of his government; Kostas Simitis’s governments are (despite instances of ministerial corruption) deemed as the ones that came closest to an effective reform of the Greek core executive; and Kostas Karamanlis is said to have borrowed heavily from his uncle’s governing style, but his own style eventually exacerbated the endemically centrifugal nature of the Greek core executive. The authors very briefly refer to George Papandreou’s government, attributing its failure to deliver on its ambitious reform plan to the PM’s own diffused management style and the climate of perpetual crisis under which the executive had to operate.

The book is full of striking revelations – for example, the fact that the centre of the Greek government contains virtually no permanent civil servant in its ranks, with all members of staff being political appointees – but also presents a sober explanation of the limitations that PMs face, such as the pathologies of a mass of laws. The authors are particularly careful not to fall into the trap of ‘national character’ stereotypes, recognising, however, the role played by the setting and cultural habits (it is stated that these factors ‘nudge’ or limit, rather than determine, actors in a specific direction). Their insight into the role of systemic and other factors is also very interesting and in many cases poignant: see, for example, the reference to Greek political parties, especially in light of recent developments:

[They] lack institutionalization and are not conduits for policy formation. [They are] essentially campaign rallies for the leader; there is limited evidence of them preparing for government by attending to blueprints for reform (217).

What is missing from Featherstone and Papadimitriou’s analysis is an up-to-date evaluation of the effect of the debt crisis on Greece’s core executive. The authors rightly point out that the jury is still out on the impact of external pressure on reforms, but they also paint a gloomy picture: ‘[…] even if a financial solution is found, those deeper questions of governance would remain. […] without such external pressure the indigenous push for reform would be too weak to deliver significant and broad reform’ (228).

Throughout the book, the authors make a rather persuasive case, putting forward compelling and novel arguments, substantiated with a copious amount of evidence, thus making Prime Ministers in Greece a very welcome addition to the literature on the topic and a highly recommended book for students of both Greek and European politics and contemporary history.

Note: This article originally appeared at our sister site, the LSE Review of Books. It gives the views of the author, and not the position of EUROPP – European Politics and Policy, nor of the London School of Economics.

Alexandros Nafpliotis – ELIAMEP
Alexandros Nafpliotis is a Research Associate at the Hellenic Foundation for European & Foreign Policy (ELIAMEP). He completed his PhD in International History at the London School of Economics, and worked as an Attaché at the High Commission of the Republic of Cyprus in London. He recently published his first book, Britain and the Greek Colonels: Accommodating the Junta in the Cold War, and he is currently co-editing a volume on Anglo-Greek relations in the twentieth century.

Europe’s future rests on a Greek election that has only one certain outcome: greater uncertainty.