Legislative decision-making in the European Union is increasingly shifting toward informal secluded arenas, to allow for the early adoption of laws. Edoardo Bressanelli, Christel Koop and Christine Reh assess the implications of this trend for the behaviour of political parties in the European Parliament. They find that informalisation has strengthened the cohesion of the three centrist groups (EPP, S&D and ALDE), which have become more effective in delivering their members’ votes and in limiting defections. However, the authors argue that this increase in cohesion should not be taken as unconditionally good news for EU democracy.

Over the last decades, the European Parliament has been empowered by successive rounds of EU Treaty reform: it has gained a prominent role in the appointment of the European Commission (President), a shared budgetary authority, and the power to veto the EU’s trade agreements. Most importantly, the Parliament has been turned into a genuine co-legislator under the decision procedure.

Indeed, the EU has come to resemble a bicameral system of two equally powerful chambers, with Europe’s citizens represented in the Parliament and the member states represented in the Council. At the same time, codecision — or the ‘ordinary legislative procedure’, as rebranded by the Lisbon Treaty — has changed significantly since its introduction in 1993. In particular, what used to be a lengthy legislative process—with laws regularly concluded at second reading, and frequently requiring conciliation at third reading — has been transformed into a process where the Parliament and the Council routinely adopt laws ‘early’ at first reading. The figure below shows that third readings are nearly extinct today, and the number of second readings is much reduced.

Figure 1: Towards the end of third reading conclusions? 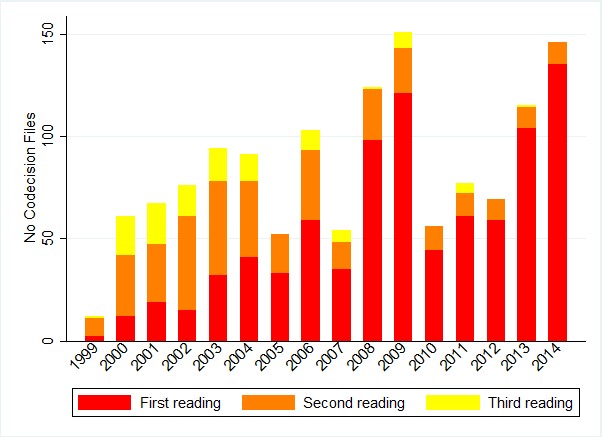 Source: Data from the authors’ on-going research on informal legislative politics in the European Union. Further information is available here.

This transformation, which ran in parallel to the Parliament’s empowerment, happened for two reasons. First, the 1999 Amsterdam Treaty made it formally possible to adopt a law at first reading under codecision. Such early adoption hinges upon the ‘rubberstamping’ of a pre-agreed compromise at first reading in both Parliament and Council.

Second, to capitalise on the possibility of early conclusion, the co-legislators and the Commission developed an informal system of tripartite meetings, known as ‘trilogues’, in which the compromises are negotiated. The informal politics of codecision proved highly successful: first reading agreements soared from 29 per cent in the Fifth Parliament (1999-2004) to 85 per cent in the Seventh (2009-14); currently, almost all legislation adopted by the EU is pre-negotiated in trilogue. The figure below provides evidence for this trend; it contrasts the number of co-decision files pre-agreed informally and concluded early (early agreements) with the number of files following the ‘formal route’ (non early agreements).

Figure 2: The development of early agreements over time 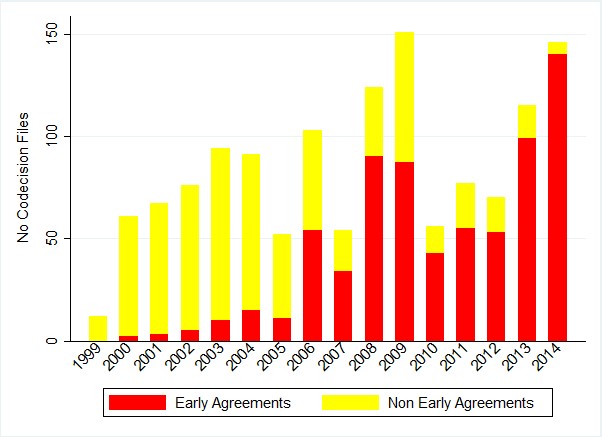 Source: Data from our on-going research on informal legislative politics in the European Union. Further information is available here.

Given the scale of this trend and the concomitant transformation of the EU’s inter-institutional bargaining, we were curious about the impact of informalisation on political parties: on their organisation of work in the European Parliament, on their legislative behaviour and, in particular, on their cohesion (that is, their ability to contain dissent and hold the line in a vote).

We argued that informalisation should change parties’ voting behaviour: if an informal compromise — agreed between Parliament and Council, perhaps after several rounds of trilogues — is not approved by the plenary at first reading, the law cannot be adopted early. And such failure is costly for parties: it undermines their credibility as reliable partners, jeopardises future opportunities for influence in trilogues, and ‘sinks’ resources invested in the search for compromise. Consequently, in ‘high stakes’ votes on early agreements, parties should invest particularly in disciplining and/or coordinating their members—to strengthen their voting unity and, thus, to make sure that the Parliament keeps its commitment vis-à-vis the Council.

Analysing roll-call votes on all concluded codecision files from 1999 to 2011, we found strong evidence that informalisation does affect parties’ voting behaviour. Yet, it does not affect all parties equally. Most importantly, our research suggests that only the three centrist groups are affected by early agreements and modify their behaviour accordingly. The European People’s Party (EPP), the Socialists and Democrats (S&D) and the Alliance of Liberals and Democrats for Europe (ALDE) are significantly more cohesive when voting on a compromise text, while cohesion in the smaller political groups does not change or, in the case of the Eurosceptics, is actually lower.

We argue that these results are best explained by the particularly high costs of failing early agreements for centrist parties. These parties always have domestic ‘counterparts’ in the Council; either the centre-right or the centre-left (if not both) are part of every winning coalition; and the liberals are often part of ‘super grand’ alliances behind a law. These groups and their members have a lot to lose from not delivering at first reading—reputation, influence, reciprocity; they should, therefore, invest particularly heavily in discipline through sanctions and/or coordination when their members vote on early agreements. At the same time, individual legislators have stronger incentives to toe the line if their national party has been supportive of the compromise in the Council.

Our findings not only shed light on the actual functioning of the ordinary legislative procedure, and on the impact of informalisation on political parties; they also raise broader normative questions. Where legislation has been pre-agreed informally in secluded trilogues between the Parliament and the Council, the centrist groups are particularly cohesive in plenary. In national democratic politics, cohesion is taken as an indicator of political parties’ ‘good health’: only cohesive parties can deliver the votes to keep their (electoral) promises. In EU decision-making, the routine pre-agreement of legislation between cohesive super-majorities of centrists within and across the EU’s institutions may, indeed, be highly efficient.

Yet, this trend questions whether the introduction of codecision has really led to the expected boost for public deliberation and inclusiveness. Instead, our findings signal a growing ‘cartelisation’, with the centrist parties taking advantage of the new informal politics to increase both influence over policies and control over their members.

Note: This article gives the views of the authors, and not the position of EUROPP – European Politics and Policy, nor of the London School of Economics. For more information on the research outlined in this post, see the authors’ recent article in European Union Politics. Featured image credit: European Parliament (CC-BY-SA-2.0)