The principle of strengthening national parliaments in the EU’s legislative process has attracted substantial attention in recent years. Perhaps more important, however, is their role in economic governance. After the European Council of 17-18 March endorsed the policy priority areas of the Annual Growth Survey, Valentin Kreilinger writes that national parliaments can play a key role in scrutinising the economic policy surveillance and coordination of the so called ‘European Semester’.

The economic and financial crisis has exposed the failure of the original Maastricht settlement with its weak controls over national fiscal and economic policies. In reaction to the crisis, a wide range of measures to strengthen coordination and surveillance have been adopted.

But the Economic and Monetary Union is not viable in its current form because member states have not sufficiently oriented their fiscal and economic policies to the requirements of the monetary union. They don’t comply with numerical rules just because they entered contractual agreements. Ownership has been a buzzword of economic governance for a long time, but it still captures the heart of the problem: National governments and parliaments do not see recommendations from European coordination and surveillance mechanisms as ‘theirs’.

Despite the creation and the strengthening of the European Semester, the EU’s yearly cycle of economic policy coordination, acceptance of the common rules and compliance of member states with coordination and surveillance mechanisms are still too low. Involving national parliaments has been acknowledged as important for ensuring legitimacy, ownership and accountability in the Economic and Monetary Union: In June 2015, the Five Presidents’ Report explicitly called for a ‘renewed’ and ‘more integrated’ European Semester. 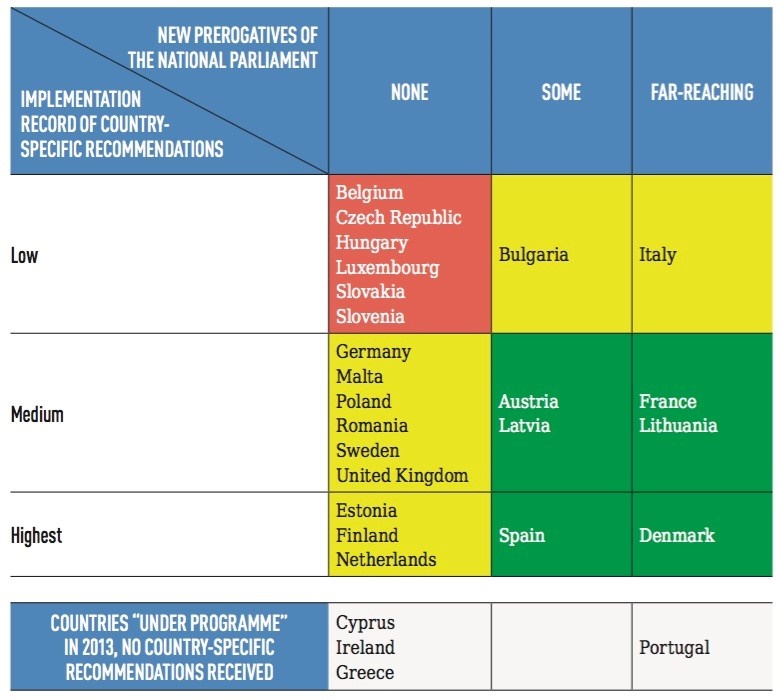 Public opinion is more favourable towards the coordination of economic policies than commonly assumed: In those countries that had a low implementation record for Country-Specific Recommendations and whose national parliaments did not obtain new prerogatives in the European Semester, citizens were particularly in favour of a preliminary consultation between EU institutions and national political institutions in the drafting process of national budgets (72 per cent in these six countries against 65 per cent among all member states, according to the 2012 European Parliament Eurobarometer survey).

In a broader perspective, the governance structures, decisions and recommendations associated with the common currency are suffering from a legitimacy deficit. This relates to emergency measures, like providing financial guarantees and support to individual member states whose currency is the euro, as well as to the severe conditionality tied to these rescue packages: Only a few national parliaments, such as the German Bundestag, have robust veto powers, others have not – the national parliaments of countries that had to sign a ‘Memorandum of Understanding’ often find their role reduced to rubber-stamping austerity measures.

A major overhaul of the Economic and Monetary Union is needed and should consist of a package that contains more division of sovereignty, more risk sharing and more democracy. Transferring, sharing or pooling sovereignty is the problem for some countries – more risk sharing is the problem for others. And while, in principle, nobody objects to more democracy, there is no agreement on the precise steps to be taken to organise better democratic control of the Economic and Monetary Union and alleviate the legitimacy deficit.

Parliamentary scrutiny of the day-to-day coordination and surveillance of fiscal and economic policies could address the problem that adaptation of national parliaments to the stronger surveillance and coordination mechanisms in the Economic and Monetary Union has so far only happened in an asymmetric way. Properly involving parliaments in order to address the lack of national ownership in the coordination and surveillance procedures should become a key element in the institutional dimension of completing the Economic and Monetary Union.

The author has recently published a paper on this topic: “National parliaments, surveillance mechanisms and ownership in the Euro Area” (Studies and Reports n°110, Jacques Delors Institut – Berlin, March 2016).