Only some of the votes which take place in the European Parliament are so called ‘roll call votes’, where the positions of MEPs are recorded. These votes provide a set of reliable data that has been used in research to assess the dynamics of decision-making in the Parliament, but as Stefan Thierse writes, the factors which lead to a roll call vote being called are less well understood. Outlining results from a recent study, he finds that the reasons for calling roll-call votes often have more to do with advertising the positions taken by particular groups, rather than encouraging party discipline among individual MEPs.

Recorded votes are a key object of study for scholars of legislative politics. They offer insight into individual voting behaviour, the voting cohesion of party groups, and patterns of coalition formation. Although roll-call votes (RCVs) are not the standard voting procedure in the European Parliament (EP), they account for a comparatively high share of all votes scheduled in plenary: In the past, between one quarter and one third of all votes have been taken by roll-call.

Given that RCVs must be explicitly requested, they do not constitute a random sample of the population of votes scheduled in the European Parliament plenary. As Carrubba and Gabel have pointed out, RCVs are severely biased in terms of policy jurisdiction, voting item (amendments vs. final votes) and the sponsor of a RCV request. Given that European Parliament voting records are readily accessible to the public and that RCV requests are subject to strategic considerations, there is an abundance of scholarly contributions devoted to understanding the determinants of recorded votes. What is surprising is the fact that thus far, no study has ever considered the decision-making dynamics preceding the motion for recording a vote.

My recent research seeks to fill this gap in two ways. First, I draw on qualitative interview data to gain insight both into the motivations behind RCV requests and the group-internal decision-making and coordination processes which pave the way for to go on record. Second, I incorporate the committee stage into an explanation of recorded votes. By doing so, the European Parliament standing committees are acknowledged as those sites where the bulk of the legislative work takes place and where European party groups develop a common party line.

Furthermore, it is possible to derive and test a set of hitherto unexplored causal factors which help better adjudicate between competing explanations of RCV requests. The main argument is that RCV requests are best understood as instruments to stake out an identifiable position in the legislative decision-making process, rather than a device at the disposal of the group leadership to enforce party discipline. While this proposition is not new, the article draws on original quantitative and qualitative data to substantiate the claim of RCV requests as a signaling device.

The extant literature on RCVs in the European Parliament relies on two basic theoretical explanations: One strand emphasises the role of RCV requests as instruments of enforcing party discipline, since recorded votes allow the party leadership to identify and sanction defectors. A second explanation regards RCV requests as instruments to advertise a publicly recorded position, be it to differentiate itself from competitors or to reveal the behaviour amongst competitors. In other words, while the disciplining logic focuses on the group-internal incentives, the signaling logic shifts attention to party competition. Inspired by principal-agent theory, the disciplining logic rests on the assumption that principals (i.e. the group leadership) can influence the voting behaviour of their agents (i.e. the rank and file) by forcing a recorded vote.

Consequently, the disciplining logic suggests that RCV requests are the response to a priori internal division within the requesting EPG. The signaling logic, by contrast, does not posit that RCVs alter the voting behaviour. However, the theory implies that the sponsor of a RCV request should for its part be able to maintain cohesion. This is because RCVs reveal the exact voting behaviour of individual legislators to other EU institutions and legislative outsiders such as voters, journalists, and interest groups, and they appeal to the personal accountability of political representatives. Stated differently, in order to ‘fly the flag’ for a specific policy proposal, European party groups must illustrate cohesive behaviour on the floor.

Even though the two underlying causal mechanisms may be hard to disentangle in practice, one crucial distinction can be made: The expectation the RCV sponsor has with regard to its own observable voting cohesion if there was no recorded vote. What information is available to the group leadership to estimate the group cohesion in plenary? I argue that the voting behaviour of its committee delegation serves as an indicator of a priori group cohesion. Since the committee is where the plenary agenda is to a large extent determined, the majority constellation adopting the draft report can serve as a convenient predictor for the decision to invoke a recorded vote in plenary. Therefore, the quantitative analysis of RCV requests assesses two previously untested indicators derived from decision-making at the committee stage: The overall degree of contestation in the vote on the draft report, and the percentage of an EPG committee delegation supporting the draft report.

With regards to the effect of anticipated group cohesion in plenary, the two logics of RCV requests offer two rival hypotheses: If the disciplining logic were correct, one should see European party groups sponsor a RCV request if its committee members have not cohesively backed the draft report in committee. If the signaling logic were correct, one should observe European party groups to call the roll if its committee delegation has cohesively rejected the draft report for plenary. On the one hand, RCVs almost invariably reveal a certain degree of contestation, and signaling dissent is effective in terms of claiming credit for a unique position in the decision-making process. On the other hand, the signal strength depends on the degree to which the RCV sponsor can showcase voting cohesion.

Evidence from the quantitative analysis lends support to the signaling story of RCV requests: A European Party Group which has cohesively rejected the draft report for plenary is significantly more likely to call the roll, regardless of whether the vote relates to an amendment or the final text.

Figure 1: Predicted probabilities of a roll-call vote request for various types of votes 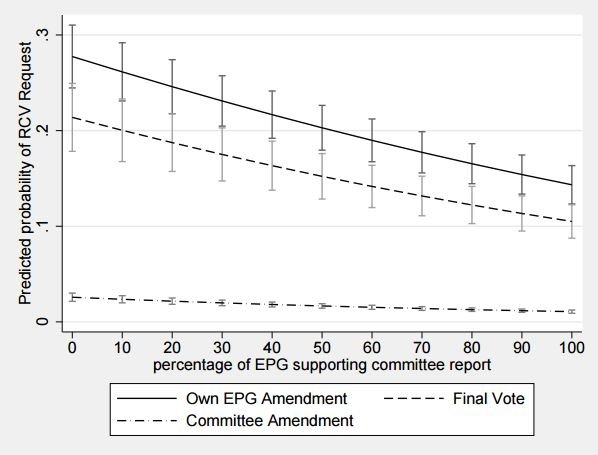 As can be gleaned from Figure 1, European party groups which are either split or perfectly cohesive in supporting the committee draft report are less likely to demand recorded votes. Substantively, a European party group which has cohesively rejected the draft committee report and has tabled an amendment in plenary has a 28 per cent chance of requesting a RCV. This figure drops to 14 per cent if the European party group has cohesively endorsed the report. This relationship holds also for votes on final texts, whereas committee amendments are generally significantly less likely to be subject to a RCV request.

All in all, this result disconfirms the disciplining logic. The interview data shed further doubt on the use of RCV requests as disciplining devices. For one thing, the initial nudge for a RCV request comes not from the MEPs’ formal principals (i.e. group leadership, national delegation chairs) who control desirable resources and could punish dissenters, but from the informal group leadership in committee. For another thing, as one respondent noted, ‘the foremost disciplinary motive is not to provide evidence of party group unity, but to furnish proof of party group presence.’

Nevertheless, it is indicative that a number of respondents independently of each other suspected other party groups of calling the roll precisely to force their members to follow voting instructions. This finding should raise caution not to reject the disciplining motivation prematurely. Even so, MEPs perceive RCV requests primarily as signaling devices, allowing the sponsor to either differentiate itself from other political groups or to embarrass other groups, e.g. for adopting a position (seemingly) unpopular or for engaging in ‘half-baked’ compromises. In summary, RCV requests seem to be more about flying the flag than whipping the rank and file into line.

Note: This post is based upon the author’s recent journal article in European Union Politics. It gives the views of the authors, and not the position of EUROPP – European Politics and Policy, nor of the London School of Economics.