At the Olympic Games, or when we see the GDP ranking of countries, or any other global comparison of countries, we tend to first look for the performance of the country we are from, live in, or have other ties to in the hope that this country has performed well against its global competition. Rankings of the level of economic freedom across countries published by US think tanks such as the Fraser Institute or the World Heritage Foundation evoke a similar reaction.

Both lists imply that most European countries need to put more effort into achieving higher levels of economic freedom. For instance, in the latest edition of the World Heritage Foundation’s Index of Economic Freedom only one European country, Switzerland, is classified as completely free, while all other European countries could improve their economic freedom (as shown in the figure below). Whereas winning in the sports arena undoubtedly reflects a high level of performance and is a desirable thing, can we say the same about wanting to be the gold medal winner for economic freedom in an economy? Do the ranking results really suggest that we have a serious issue in Europe that must be addressed by policymakers? 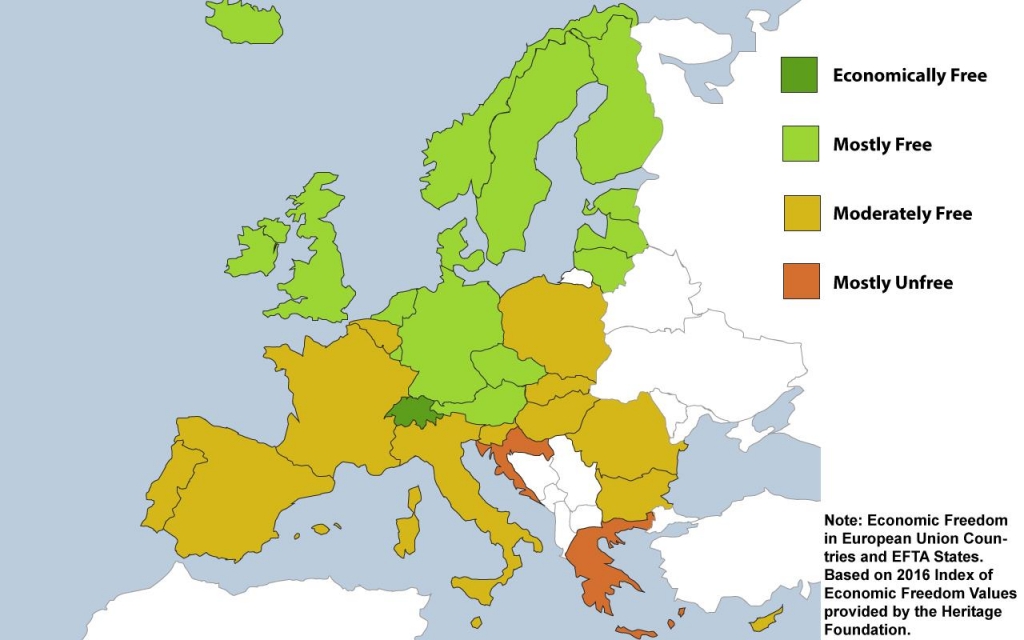 Economic freedom usually comprises a wide range of elements such as the degree to which the rule of law predominates over the rule of man, how large the government sector is, how efficient the regulatory system is and how open markets are. Particularly in times of economic crisis, policy makers need to know how to design the regulatory framework to stimulate growth. Economic freedom is probably not a panacea, and it is important to understand the effects of individual elements of economic freedom on targeted economic outcomes.

Our comparison of 63 OECD countries across different stages of economic development reveals that the situation is more complex than simply striving for the top place in the ranking. For instance, in Greece or Italy, a comparatively underutilised rule of law explains why there is only a low level of opportunity-driven entrepreneurial activity. This category of entrepreneurship is especially desirable as it consists of founders who decide to start a business having identified some great potential. Those start-ups are often highly innovative, technology-driven, and might – in the best of all worlds – spawn the next globally successful market leader. Consequently, countries such as Greece or Italy need to strive for a higher level of economic freedom by concentrating particularly on establishing more legal certainty.

The underutilisation of the rule of law in combination with limited government size on the other hand fosters high levels of necessity-driven entrepreneurial activity, as is the case in the Slovak Republic. Necessity-driven entrepreneurs start a business because they simply do not have any other option to generate a decent income, and therefore it is generally considered a less desirable form of entrepreneurship. Reducing economic freedom by enhancing government size through initiatives supporting more beneficial forms of entrepreneurship would run contrary to extreme liberalist positions, but would carry the potential for substantial welfare effects.

Those two examples clearly illustrate that there is no point in maximising economic freedom as a single measure to stimulate growth. Entrepreneurial activity is a complex phenomenon, where there is no one-size-fits-all solution. Instead, policymakers need to establish and safeguard adequate levels of economic freedom, and be sensitive to threats to that freedom, while resisting uncritical maximisation by any and all means.

Note: This article gives the views of the author, and not the position of EUROPP – European Politics and Policy, nor of the London School of Economics. Featured image: Helsenberg Media / Flickr.