Spain will hold a new general election on 26 June, following the failure to form a government after the previous election in December last year. Anwen Elias assesses how the issue of Catalan independence has played out against the backdrop of the country’s political deadlock. She writes that the independence process risks being derailed by internal divisions within the Catalan government and a lack of public support for secession, but that demands for self-government across Spain are unlikely to disappear regardless of the result in June.

In Catalan elections held on the 27 September 2015, pro-independence parties won a majority of seats in the Catalan Parliament. Claiming a “democratic mandate” to transform Catalonia into an independent state, on 9 November a process was launched to separate Catalonia from Spain. Some even talked of completing the work within 18 months. But just over six months on, how much closer is Catalonia to independence?

The obstacles to independence

One of the priorities for the Catalan government during this period has been to put in place the “structures of state” that a future independent Catalonia will need. There has been some progress on this front. For example, the proposed conversion of the Institut Català de Finances (a publically funded institution providing corporate financing) is nearing completion. And the recent restructuring and expansion of the Agència Tributària de Catalunya (the Catalan tax agency responsible for collecting local and autonomous taxes) was widely interpreted as a step towards the creation of an independent Catalan treasury.

But there are four reasons why further progress towards Catalan independence is unlikely to be either smooth or swift. Firstly, the Catalan pro-independence government is struggling to contain ideological and strategic differences between its members, Convergència Democràtica de Catalunya (CDC), Esquerra Republicana de Catalunya (ERC) and Candidatura d’Unitat Popular (CUP). These differences put the coalition government in an extremely precarious position. There is disagreement, for example, on the kind of independence that Catalonia should aspire to. Whilst CDC and ERC are committed to a future Catalan state being a part of the European Union, the CUP is radically opposed to what it sees as a capitalist European project.

More immediately problematic are different views on how to proceed towards independence. The CUP is strongly in favour of a unilateral “rupture” from Spain once the ‘process’ has run its 18 month course, whilst ERC, and especially CDC, are reluctant to commit to a fixed timescale for secession.

And then there are the fundamental differences on socio-economic issues. CUP is a revolutionary anti-capitalist party; ERC is a social democratic party; and CDC is a centrist/centre-right party. In other circumstances, where constitutional issues did not predominate, these parties would not be in coalition together. Finding common ground on issues such as the forthcoming budget is going to be extremely challenging.

Secondly, there is no majority support for independence in Catalonia. Although pro-independence parties won a majority of the seats in the Catalan parliament after the September 2015 election, they did so on the basis of having received only 48% of the popular vote. Opinion polls show that support for Catalan independence is also in decline. The most recent survey from the Centre d’Estudis d’Opinió (March 2016) found this to be the preferred constitutional option of 38.5% of respondents. Any attempt to proceed with secession in such a climate of public opinion will inevitably (and rightly) be seen as illegitimate within and outside Spain.

Thirdly, there is no consensus within Spain on how to respond to the Catalan independence process. Among Spanish state-wide parties, for example, positions vary hugely and reflect very different ideological and strategic priorities. At one extreme, the right-wing Partido Popular has refused to agree to an independence referendum or consider any kind of increase in Catalan self-government because of an ideological commitment to the unity of the Spanish nation.

At the other extreme, the anti-austerity party Podemos has supported holding a referendum on independence in an attempt to win electoral support among left-wing pro-independence voters in Catalonia, but also the Basque Country and Galicia. In between these two positions, the Spanish socialists (PSOE) are formally committed to a federal Spain, but are extremely ambiguous on what this would mean in practice because there are internal divisions over the issue. Ciudadanos, a new centre-right party, has committed itself to limited tinkering to and clarification of the current model of territorial autonomy.

There are also differences between nationalist parties, as well as between autonomous communities. The Partido Nacionalista Vasco (Basque Nationalist Party), which (along with its Catalan counterparts) has historically been a key actor in centre-periphery dynamics in Spain, has explicitly rejected independence as its immediate goal, preferring to focus on the full implementation of Basque autonomy within the existing legal framework.

There are smaller parties that support Basque independence, but popular support for independence remains relatively low at around 20%. In other parts of Spain, some autonomous communities consider that the process of decentralisation has already gone far enough, and would oppose any efforts to enhance existing autonomy provisions. So there is no unified front of regional actors challenging the state’s political authority. Rather, there is a highly heterogeneous collection of territorial interests reflecting the very different economic, cultural, social and political profile of different autonomous communities.

Fourthly, the fragmentation of the Spanish political landscape in recent years has hindered any serious discussion of the broader principles underpinning the territorial organisation of the Spanish state, and Catalonia’s place within any such territorial model. This fragmentation is the consequence of a deep and enduring economic crisis, and a political crisis characterised by widespread distrust of the country’s political institutions and actors. As a result, many established political parties have lost electoral support and government office to new and previously marginal political actors advocating a radically different way of doing and talking about politics.

The issue of Catalan independence isn’t the only casualty of the transformed political landscape. On 26 June, Spain will hold its second general election within six months because of the failure to form a central government the first time round. Such instability gives little confidence that a negotiated solution to the Catalan question, one that can satisfy a sufficient majority of parties and citizens within and beyond Catalonia, is likely any time soon.

Demands for constitutional change will not go away

Pro-independence parties in Catalonia may have begun to prepare the way for Catalonia to separate from Spain, but as things stand the prospects for Catalan independence are bleak. On the one hand, the independence process risks being derailed by deep-rooted internal divisions within the Catalan government and the lack of public support for secession. On the other hand, the Spanish political class are unable, or unwilling, to offer credible alternatives to independence.

Catalonia and Spain are in a stalemate, with no clear way out of a territorial crisis that threatens the integrity of the state. But the crisis is underpinned by a much more widespread dissatisfaction with the way in which different territorial identities and interests are represented within and managed by the state. Catalan independence is unlikely to happen any time soon, but neither will the demands for more effective self-government disappear. Spain’s territorial crisis is here to stay.

The real sins of Varoufakis: why Greece is being punished for refusing to play by the Eurogroup’s rules 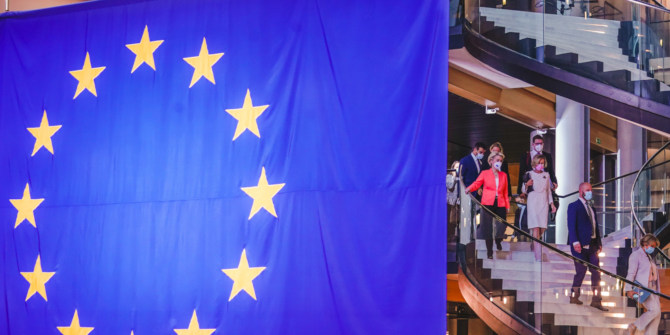 Here, there, everywhere – the gender gap at European Union Politics