In recent years, the European Commission has disbursed a large amount of financial resources to UK regions, aiming to promote economic development and employment. Drawing on recent research, Marco Di Cataldo demonstrates that the most economically disadvantaged areas have made good use of these funds and reduced the share of unemployed people more than other areas. The interruption of financial aid – one of the potential consequences of a Brexit – would be likely to undermine the labour market and economic gains achieved during the period of highest financial support.

If Britain decides to leave the European Union, UK regions would no longer be entitled to receive EU Structural Funds. This poses important questions over the effectiveness of EU Cohesion Policy in the country and the potential repercussions on the economy and labour market of less developed areas of losing access to European funds.

More than half of the total Cohesion Policy budget is allocated to the ‘less developed regions’ of Europe, i.e. those with a per capita GDP below 75 percent of the EU average. Cornwall and West Wales and The Valley are the two UK regions benefiting from these funds for the 2014-2020 period, while other regions have received them in the past.

Have these policies been successful and would discontinuation of EU funds have any effect on the performance of poorer regions? Recent empirical research has investigated the economic evolution of two UK regions, Cornwall and South Yorkshire, recipients of EU Cohesion Policy funds over recent years. The study uses state-of-the-art counterfactual methodologies in order to compare the actual economic performance of these regions with what would have happened without EU funds (all things being equal).

In order to single out the effects of the funds, 1992-2014 regional trends of unemployment benefit claimants in Cornwall and South Yorkshire are compared to those of a set of ‘counterfactual regions’ being similar in all characteristics except for not having being eligible to obtain the same proportion of Structural Funds.

The results provide clear evidence of a significant impact of EU grants on unemployment. Over the fifteen analysed years in which Cornwall has been in receipt of EU funds, the proportion of people claiming unemployment benefits has been consistently and significantly lower than in the counterfactual comparison. In Cornwall the percentage of unemployment benefit claimants has declined by 30 percent more than the counterfactual region. The empirical analysis makes sure that this effect is driven by EU funds and not by other potentially confounding policies. 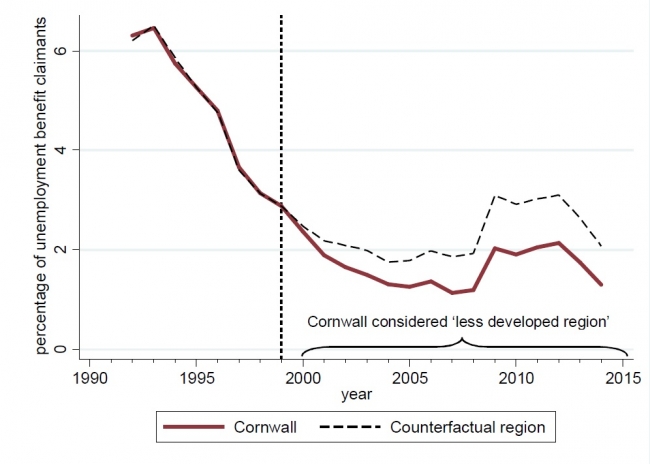 Unlike Cornwall, South Yorkshire has been categorised as a ‘less developed region’ for only seven years. Its improved economic conditions relative to the EU average entailed that in 2006 the region lost the status of ‘area in highest need of help’. Despite the fact that between 2007 and 2013 South Yorkshire was entitled to receive a form of transitional funding, the proportion of available grants reduced substantially.

Has this change in eligibility affected the region? The evidence shows that all the labour market improvements realised in the period of highest financial support – certified by a lower proportion of unemployment benefit claimants relative to the counterfactual during 2000-2006 – are completely offset when eligibility for EU grants as ‘less developed region’ is lost. As shown in the figure below, after 2006 South Yorkshire’s unemployment trend gradually went back to the one it would have had in the absence of EU funds. 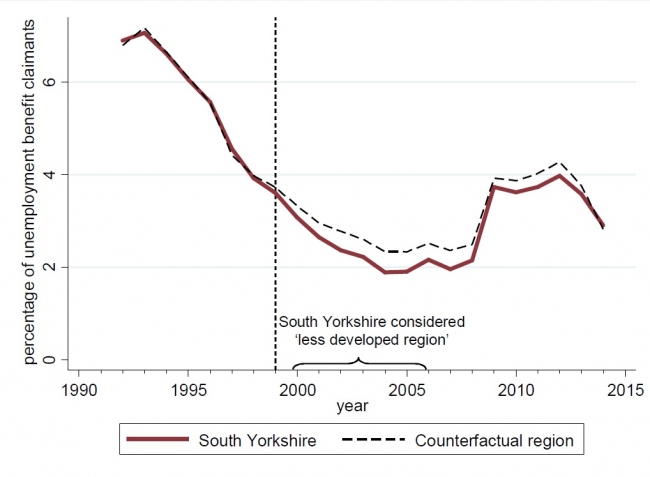 The study also indicates that per capita GDP in the two regions follows similar trajectories to those observed for unemployment. Both regions converge to higher levels of income while being considered ‘less developed’ by the EU, however this trend is reverted in South Yorkshire when its GDP overcomes the 75 threshold and the region can no longer benefit from the highest form of EU aid. While the absence of accurate data on the beneficiaries of development projects makes it impossible to explore the key mechanisms driving the empirical results, this analysis nevertheless provides interesting insights regarding the role and medium-term effects of Cohesion Policy.

Contrary to the belief of some scholars and policy-makers, counterfactual evaluations suggest that the policy can have a positive causal impact on the creation of jobs and the promotion of regional economic growth. Perhaps more importantly, these outcomes may not be persistent and long-lasting, but they may quickly disappear after the end of the high-intensity funding period, even in presence of transitional funding programmes making the reduction of EU funds more gradual.

On the one hand, these findings call for a re-think of EU programmes aiming to sustain regions in their process of transition from low to middle-level incomes. On the other hand, they should foster a careful reflection on how regions would react should they suffer a drastic interruption of EU funding. The latter is a problem the most economically disadvantaged UK territories might face in case of ‘Brexit’. In the absence of similar national policies able to quickly compensate for the radical change in the funding environment for less developed regions, their economy is likely to be the most exposed to the highly asymmetric adverse economic consequences of ‘Brexit’.

Note: This article gives the views of the author, and not the position of EUROPP – European Politics and Policy, nor of the London School of Economics. The arguments presented here draw on the findings outlined by the author in a recent research paper. Featured image: Rachel Docherty / Flickr. 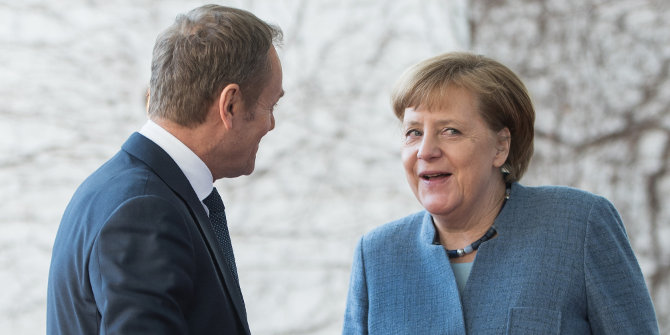