All of Scotland’s local authorities voted to stay in the EU, with 62 percent of voters backing Remain. James Mitchell traces support for the EU back in time, explaining that the initially tepid enthusiasm increased considerably as the EU became more closely associated with trade union rights. Nicola Sturgeon has already taken steps to secure continued engagement with the EU, while Brexit presents particular challenges for Scotland’s Tories.

The Brexit vote provides further evidence of the divergence of Scottish and British politics. Devolution has been described as a ‘fragile divergence machine’ for public policy and has been a robust divergence machine for public expectations and preferences. The potent image feeding the sense of divergence is the monochrome map of Scotland (see below) showing all 32 local authority areas voting to Remain in the EU above a very different image of the rest of the UK. 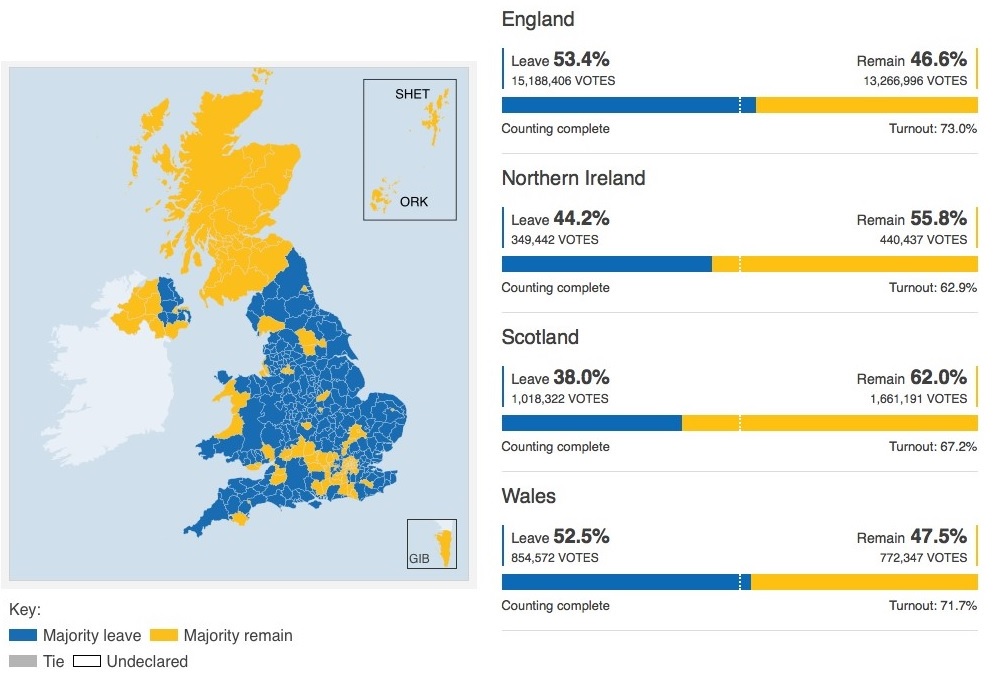 The different ways that the EU has been framed over the long haul best explains this divergence. In the 1970s, Scots were unenthusiastic about European integration but as the UK grew more sceptical, Scotland became more supportive. The European Community/Union came to be framed in positive terms in Scotland.

This reframing was led by a range of organisations and individuals. Scottish local authorities found the European Commission more receptive than UK central government. The Scottish Trade Union Congress, particularly under the leadership of Campbell Christie, regarded the European Community as a friend of trade union rights. This shift also occurred in the Labour Party and Scottish National Party. By the time of devolution, opinion had shifted decisively.

Margaret Thatcher’s euroscepticism only served to confirm this trend. The eurosceptic wing of the Scottish Tories was almost invisible. The European question did not feature in the last Scottish Tory leadership contest. Latent anti-EU sentiment lacked a significant Scottish political voice. After the 2011 Holyrood elections there was only one Member of the Scottish Parliament (MSP) who openly opposed EU membership. Elite opinion had either swung behind the EU or was otherwise engaged. UKIP failed to attract much support, perceived in Scotland as an unvarnished version of Margaret Thatcher’s English nationalism.

The culmination of this positive framing came during the independence referendum. Both sides agreed that EU membership was in Scotland’s economic interests. Immigration was not an issue other than each side insisting on the importance on free movement in the EU. Again, the issue had long been framed differently north and south of the border.

The Scottish First Minister has adopted a twin track approach following the EU referendum. She seeks to limit the damage from Brexit and pursue the goal of independence. She has created a Standing Council on Europe, chaired by Glasgow University’s Vice Chancellor and including a former Judge on the European Court of Justice and a former head of the UK Foreign Office and Diplomatic Service. Her priority is to secure Scotland’s EU relationship and she has urged other parties to support the initiative.

While few doubt that Brexit constitutes a ‘significant and material change in circumstances’, one of the conditions in the SNP’s recent manifesto to trigger a second independence referendum, Nicola Sturgeon struggles with whether it meets the second: ‘clear and sustained evidence that independence has become the preferred option’ of a majority in Scotland. An independent Scotland within the EU would confront similar challenges faced by Ireland. The EU vote may ‘create a golden opportunity for proponents of Scottish independence’, as suggested by one of the leading campaigners against independence during the 2014 referendum, but Brexit creates new problems for the SNP if the UK insists on hard borders with EU member states.

But it is the Scottish Tories, fresh from replacing Labour as Scotland’s second party, who have most to fear from Brexit. Brexit has placed Ruth Davidson, Scottish Tory leader, in an uncommon and uncomfortable position. She is instinctively oppositional and struggles when forced to defend a position. Her party failed to support the First Minister in establishing the Standing Council. Labour’s Scottish leader lambasted the Tories for doing more to undermine the UK union by removing a key pillar in the case for the UK union and opening up the possibility of a second independence referendum. But Dugdale and her deputy are split over the future of Jeremy Corbyn and unlikely to be able to capitalise on the Tories’ discomfort.

Both Labour and the Tories need a response to Brexit given the emphasis placed on the UK being a member of the EU during the independence referendum. In time honoured tradition, Labour has resorted to exploring a federal solution with little sense of what this means. Federalism has been the evasive screen drawn over constitutional conundrums for over a century by various parties in the UK.

The Tories’ European problems have finally arrived in Scotland. The rise of the Scottish Tories in Holyrood includes six Tory MSPs, a fifth of the total, supporting Brexit. Davidson insists that the UK market is more important to Scotland than the EU and argues that a hard border between an independent Scotland inside the EU and the rest of UK would seriously damage Scotland, but she ignores the corollary that a hard border between the UK and the EU would also be damaging for the UK. Brexit makes a second independence referendum more likely.

Brexit is set to dominate politics over the coming years. Regardless of Scotland’s constitutional status, the SNP want a deal with the EU that ensures free movement and access to the single market. Labour and especially the Scottish Tories are caught between wanting a soft border for economic reasons and a hard border for political reasons. They find themselves in a very uncomfortable place.

Note: This article was originally posted at UK in a Changing Europe and it gives the views of the author, and not the position of EUROPP – European Politics and Policy, nor of the London School of Economics. 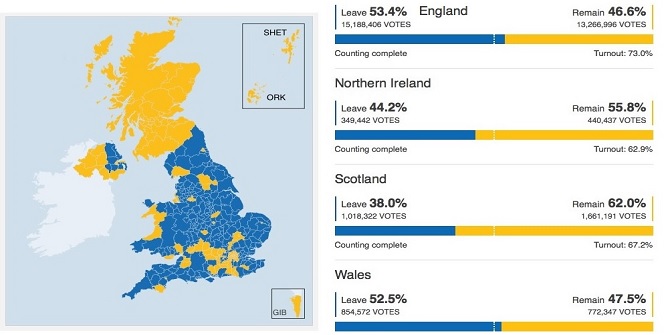