The practice of holding European Parliament plenary sessions in both Brussels and Strasbourg has frequently been criticised on the basis that it is financially wasteful and damages the environment. But what shapes the opinions of MEPs on the subject? Based on survey evidence, Simon Hix and Richard Whitaker illustrate that while there is support among a large number of MEPs for holding all plenary sessions in Brussels, the travel distance from an MEP’s country to Strasbourg goes some way toward explaining their view on the issue.

For some, the location of the European Parliament in Strasbourg has symbolic importance – representing the reconciliation between Germany and France – and should be maintained. For others, though, transporting legislators and their staff from Flanders to Alsace for 12 ‘plenary sessions’ each year is financially wasteful (costing over €114m per year), is bad for the environment, and contributes to a poor public image of the EU.

Much of the European Parliament’s work takes place in Brussels but the requirement for MEPs to hold their monthly plenary sessions in Strasbourg is set out in the Treaty on the Functioning of the European Union (Protocol No.6). Contrary to popular wisdom, then, the monthly ‘travelling circus’ is not something that the MEPs themselves are in a position to change.

In fact, in a new survey of MEPs, we found that the monthly journey to Strasbourg remains as unpopular as ever. Our survey, which builds on previous MEP surveys conducted by the European Parliament Research Group (EPRG), asked MEPs how much they agreed or disagreed with the statement: “the European Parliament should be allowed to hold all its plenary sessions in Brussels”. Some 73% of the MEPs who responded to the survey in 2015 “agreed” or “strongly agreed” with this statement. This number has changed little across the four waves of surveys of MEPs by EPRG, with a low of 69% in a survey in 2000.

As we might expect, support for holding plenaries in Brussels rather than Strasbourg varies from one member state to another. Figure 1 shows how support for ditching the trips to the French city varies by member states, for those member states where we had at least 5 MEPs respond to our survey in the 2000 and 2015 surveys. 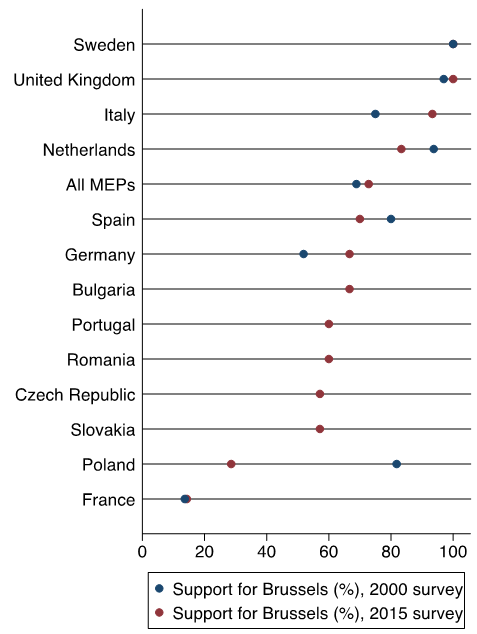 In general, support for ending the plenaries in Strasbourg increased for almost all member states between 2000 and 2015, although it did decrease amongst MEPs from The Netherlands, Spain and Poland. Unsurprisingly, support for moving from Strasbourg is lowest in France. In contrast, more than 50% of respondents from almost all the other member states agree or strongly agree that plenaries in Strasbourg should cease. Swedish and British MEPs are most in favour of the change. Support for the switch is lower amongst German MEPs, but increased from 52% in 2000 to 67% in 2015.

These differences between member states may make sense in that the UK and Sweden are among the member states with the most Eurosceptic publics, while German MEPs may be more sensitive to the importance of Strasbourg as a symbol of peace between Germany and France.

However, when we looked in detail at the determinants of MEPs’ attitudes towards Strasbourg vs. Brussels we found a more prosaic influence on their views: the relative time it takes for MEPs to get to Brussels and Strasbourg from their home member state. Starting from the simple assumption that MEPs have limited time available, given their high legislative workload as well as their need to travel frequently between their constituencies and the EU’s institutions, we suspected that those MEPs for whom travel to Strasbourg takes considerably longer than it does to the Belgian capital, are more likely to favour having to travel only to Brussels. Extra travel time also adds to stress, for MEPs and their assistants, and is of course detrimental to work-life balance considerations.

We tested this idea using a ratio of the travel time to Strasbourg compared with Brussels from each MEP’s capital city. For example, it takes around 95 minutes to fly from Dublin to Brussels and 200 minutes to travel to Strasbourg. In this case, our ratio measure for Irish MEPs is simply 200 divided by 95, which equals 2.11. When we take into account other factors that might explain an MEP’s view on this issue, such as the length of an MEP’s tenure and his or her ideological position, we find that relative travel time to Strasbourg compared with Brussels does indeed explain attitudes towards the so-called “single seat” issue. Figure 2 shows this relationship graphically.

Figure 2: The effect of travel time to Strasbourg (relative to Brussels) on support for holding all European Parliament plenaries in Brussels 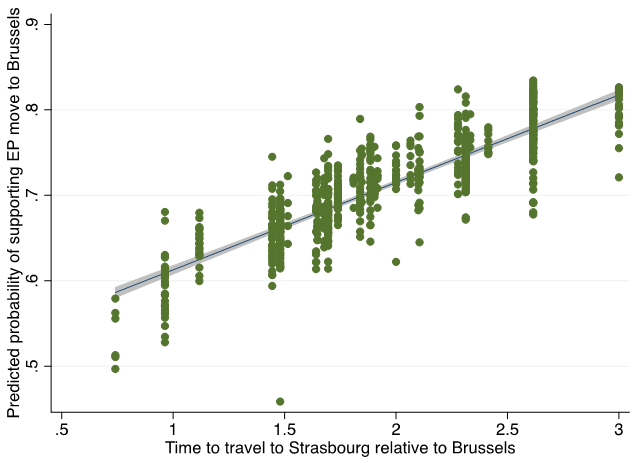 Note: Each green dot is the predicted probability of supporting a move to Brussels for each MEP, taking into account a variety of factors, and the grey shaded area depicts the 95% confidence intervals around the linear prediction.

The issue of whether the European Parliament should continue to “schlep” from Brussels to Strasbourg each month is not going to go away. There are clearly ideological and financial issues at stake, and some factors are more important to some countries than others. But at the centre of the issue are MEPs and their staff, who suffer from the stress of their monthly schedule. Our research shows clear evidence of this, revealing that the time taken to travel to Strasbourg relative to Brussels is a strong predictor of MEPs’ preferences on the “single seat” question. In short: don’t blame the MEPs!

Note: This article gives the views of the authors, and not the position of EUROPP – European Politics and Policy, nor of the London School of Economics. Featured image credit: © European Union 2011 PE-EP/Pietro Naj-Oleari (CC-BY-SA-2.0) The research was funded by a Leverhulme Research Project Grant RPG-2014-277