Should François Fillon face off against Marine Le Pen in the second round of the 2017 French presidential election, which candidate would have the edge? John Gaffney assesses the key policy differences between the two candidates, arguing that Fillon’s victory in the French centre-right’s primary was probably the worst possible outcome for Le Pen.

It has been the received view until recently that Marine Le Pen would go through to the second round of the French presidential election in 2017, possibly with the highest round one vote, in the high 20s, but that almost any other candidate would beat her in round two – except perhaps François Hollande on account of massive abstentions. There are many people on the left who say they would not vote Hollande even if it meant she might win, unlike in 2002, and in some opinion polls Hollande’s approval ratings are as low as 2%.

But since the 2014 European elections, the German Regional elections, Brexit, and then Trump (and the Netherlands, Austria, Hungary, and Five Star Movement in Italy…) it is clear that no one has a grasp on what is happening. The analysts, like the opinion polls, are consistently wrong. And in French domestic politics Le Pen’s popularity has begun to look seriously ominous given the chaos within both the left and right.

Add to this the very great disillusion/disaffection in France itself with government and the political class generally as well as – since the Bataclan and Nice terror attacks – a palpable fear (the breeding ground of populism), and you have a potentially dramatic and volatile situation. This is made even more so by the twists and turns of the presidential race – ironic in that the presidency was created to bring stability.

So, into this unpredictable situation steps the ultra-calm François Fillon. Fillon is the huge surprise of the ‘Right and Centre’ presidential primaries. And the rally around him rather than around the favourite Alain Juppé and second favourite, Nicolas Sarkozy, is extremely informative. It was first an anti-Sarkozy vote; but it was also an assertion that there remains a clear mainstream right. Fillon, strangely, is more of a threat to Marine le Pen than Alain Juppé. He is, like Marion Maréchal-Le Pen, closer to the ‘fundamentalist’ Catholics, and the anti-marriage pour tous, Sens commun, and Printemps français. He is himself a practising Catholic and is anti-gay marriage, and anti-abortion – although would probably only try to repeal ‘gay adoption’ rights, which might be a popular initiative given worries (myths, but no less powerful for that) about protecting children.

Fillon’s presidential candidacy not only puts the right back on the map, he is also the real danger to Marine Le Pen because his views are nearer the far right. Many of his views are like his first round rival Nicolas Sarkozy’s (on immigration, for example) but – and this is crucial – his personality is very different. Unlike Sarkozy, he is quiet and reassuring. Economically, too, he is for deep reforms to open up the markets; he supports cutting 500,000 civil servant posts (France has twice as many civil servants as Germany and is half as efficient), and abolishing the 35-hour week, among other reforms.

Also, unlike the other candidates in the primary, his ‘programme’ was clear and known, so he exuded if not charisma, then confidence (which in turn is transformed into a kind of charisma). His success is largely the result of people knowing what he intends to do. He is an admirer of Margaret Thatcher, although he can balance this with his ‘social Gaullist’ past. Le Pen will, like Trump, go for protectionism, easy solutions, ‘follow me’, helping the workers, and the ‘little guy’ style of populism. But she will be forced now to emphasise this further in the face of Fillon’s far-reaching reform programme, which will be popular: less state, reform of the labour laws, lightening tax burdens on business and families.

Fillon’s further advantage is that Juppé’s star rose as a kind of father (or grandfather?) figure versus the volatile Sarko (and useless Hollande). Fillon is a kind of conflation of Sarkozy and Juppé: tough but reassuring, economically sound, yet socially conservative. Probably the best candidate to stand against Marine le Pen if, as expected, she goes through to the run-off in 2017. His two potential disadvantages being that first, fewer of the left will be as happy to vote for him as for Juppé, and second, France’s huge civil service electorate will be worried as regards their job security. But to block Le Pen they will all have no choice.

When we speak of populism, it depends on what we mean, but if we assume a kind of everyday definition, Marine Le Pen will certainly use it to the full in 2017. Fillon cannot so readily use populism as he is popular because he is the anti-demagogue. But – and here’s the magic wand – what he will do is develop the Gaullist idea of the rally (rassemblement) seen in round one of the primaries and dramatically increased in the run-off.

From now on, his team will encourage this idea of the rally ‘autour de sa personne‘, a rally of opinion and emotion around a person or persona who ‘incarnates’ ‘a certain idea of France’ (the opening lines of de Gaulle’s Memoirs­). He will also appeal to another deep myth of La France profonde: quiet, small town and rural, ‘decent’ France, the France Fillon lays claim to. And although there is a worrying populist/far right strain in French political culture, there is also, as is the case in Greece, Italy, and Spain, for example, a real political ‘intelligence’ in the culture and the electorate. Fillon will appeal to this.

On the themes for 2017 (assuming it will be Fillon and Le Pen who go through), there will be ‘real’ ‘perceptible’ choices between the candidates. These include a clear debate between strong Schengen borders and strong French borders; remaining an active member of the European Union vs ‘Frexit’; ‘modernisation’/responding to globalisation vs ‘raising the drawbridge’ style protectionism; and getting the market economy going again vs strong social state protection.

On immigration, Le Pen’s advantage is diminished because Fillon is also ‘tough’ on immigration and assertive of an imagined French ‘identity’ that is being lost. These contrasts will make for extremely good rhetorical jousting, but the real ‘theme’ will be that of ‘personality’, the characters of the candidates, and over the next six months this aspect will be central to political developments.

There is then the more prosaic issue, namely, of not only how Le Pen would govern, but with whom. Currently she only has 2 MPs. You need a minimum of 289 to govern with an overall majority of one in the French National Assembly. We can assume that the left will be decimated. Fillon would have a potential landslide majority. It is therefore likely that – at least this time – the French will vote for an economically and socially bumpy ride with François Fillon rather than go over the cliff with Marine le Pen.

Note: This article gives the views of the author, and not the position of EUROPP – European Politics and Policy, nor of the London School of Economics. Featured image: Marine Le Pen at the European Parliament. © Claude Truong-Ngoc / Wikimedia Commons. 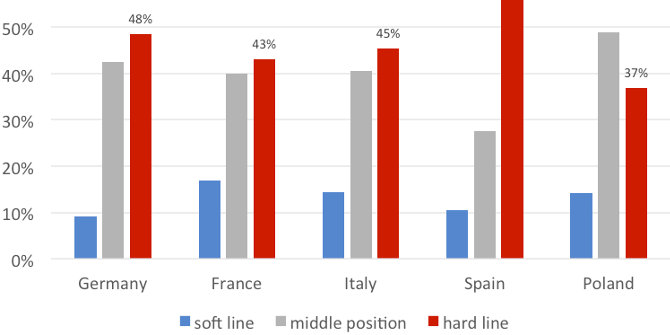