Macedonia has experienced a wave of unrest and demonstrations since the start of 2015. With elections due to be held on 11 December, Viktorija Mano writes that the vote will provide an opportunity for the people of Macedonia to voice their concerns at the ballot box, but that it remains questionable whether the contest will be enough to ease the country’s recent tensions.

Macedonia is still a relatively young parliamentary democracy, with the country becoming independent in 1991 after the disintegration of Yugoslavia. Since its independence, it has repeatedly attempted to achieve political and economic stability against the backdrop of a number of major issues. The war in Yugoslavia at the beginning of the 1990s, the ongoing name dispute which made Greece trigger an economic blockade in 1995, and the Albanian minority conflict in 2001 are simply some of the most notable of these. Nevertheless, the country had until recently been efficiently tackling these issues while progressing on the process toward EU accession.

In the last couple of years, however, the political situation in Macedonia has dramatically changed. Tensions began after elections in April 2014 when the ruling conservative party, VMRO-DPMNE, which is lead by the now ex-prime minister, Nikola Gruevski, defeated its main political opponent, the Social Democratic Union of Macedonia (SDSM). Since then the SDSM, which remains the main opposition party, has boycotted parliament despite pressure from the EU to return.

In February 2015, the SDSM began releasing wiretapped recordings in which members of the government, including the ex-prime minister, are heard discussing allegedly corrupt deals focused on influencing the media, judiciary and public administration, rigging election results and controlling public institutions. These wiretapped conversations also demonstrated an alleged cover-up of the death of a young demonstrator on election night in 2011 involving the police and the minister of interior affairs and many other illegal ways of undermining basic human rights. This spiralled into an anti-Gruevski rally throughout the summer of 2015.

The deciding factor which caused demonstrations to flare up was the President’s decision to offer amnesty to 56 politicians and civil servants mentioned and involved in the wire tape recordings who were being investigated for crimes. During this time the protests in Macedonia’s capital continued and several global leaders, including from the EU and United States, highlighted concerns regarding the apparent backsliding of democratic values in the country. Even though the President withdrew the offer, this motivated a number of meetings between EU officials, the government and opposition party politicians in order to negotiate the resignation of the prime minister and a date for early elections.

The question that remains is whether the 11 December elections will ease tensions or simply lead to further instability. The answer to this question is linked to the likely outcome of the vote. Opinion polls initially put VMRO-DPMNE slightly ahead of the opposition SDSM, but this was only before the wiretapping investigation by the country’s Special Public Prosecutor’s office (SJO) came to a set of crucial findings. The SJO office has announced that the latest findings of the investigation indicate the involvement of the Security and Counterintelligence Directorate with the approval of Gruevski in illegal surveillance. The deputy special prosecutor Fatime Fetai stated that there is ‘reasonable suspicion that the suspects, using their offices and powers, at the expense of state funds, through misuse of the communication surveillance equipment, seriously breached the basic human rights of the unlawfully wiretapped citizens’.

Considering all of these developments, established academics and politicians have brought forward some of their estimations about what these elections might mean for Macedonia. But it is important to highlight that the opinions of officials and the people in Macedonia on the topic remain divided. The more optimistic interpretations revolve around the idea that the elections are an opportunity to ‘punish’ the government and to protest against their old practices and policies. It has been argued by former diplomat Nikola Dimitrov that due to the government’s control over the media, people in Macedonia have the feeling that they have been living in a ‘reality show’. Some politicians from the SDSM even refer to these elections as a ‘referendum’ in which the Macedonian citizens need to decide whether they would like to live ‘in poverty and corruption’ or in a ‘developed and democratic’ country.

The less optimistic take put forward by former cabinet members, on the other hand, is that recent events have shown that Macedonia has a serious problem with democracy which is related to the way the populist governing party has been manipulating elections. A worrisome issue is the lack of institutional development, especially as over the last decade the institutions have been taken ‘hostage’ by the government in many respects. Considering these aspects, some members of VMRO-DPMNE argue that there might not be any significant change following the elections. They base this on the idea that the people ‘have not recognised a good alternative’ since the opposition has not brought forward any ‘suggestion for a constructive change or policy’.

However, the people are arguably clear about what they want. Aside from economic prosperity, a better standard of living, more employment, the fight against crime and corruption, and a more transparent functioning of institutions, they want democracy throughout the country which will lead to economic progress in the future. Recent survey evidence suggests that living in freedom, without fear and intimidation is highly important for them. Furthermore, nearly 80 per cent of the 1,200 respondents to this survey felt that ‘expressing freely their opinion could have negative consequences for them and their families’. 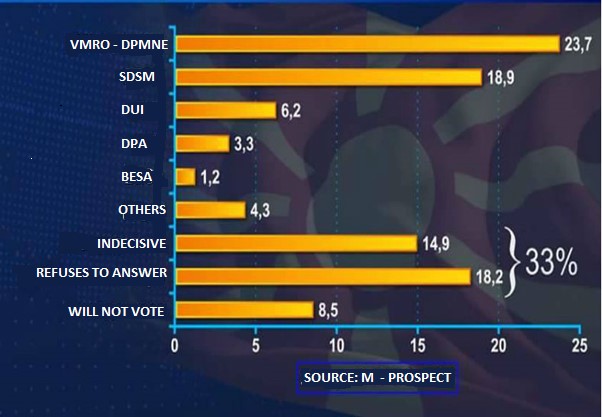 It is worth mentioning that many pre-election surveys have been done from a number of independent agencies and institutes including international bodies and those within Macedonia. They all show VMRO–DPMNE leading the voting with between 23 and 28 per cent, while the SDSM is attracting between 19 and 27 per cent. However, what is arguably most important to highlight here is that the majority of the population either does not want to respond to the survey questions or remains indecisive (33-45 per cent).

These elections are ultimately regarded as an opportunity for the elected government to pull the country out of its crisis and move closer towards EU integration. However, it is necessary for the elections to be credible and transparent and at this stage it is uncertain whether they will ease Macedonia’s current tensions. One might hope that whatever the outcome, the country will elect a government that can continue with the reform process on its way to NATO and EU integration.

Viktorija Mano – University of Roehampton
Viktorija Mano is a Lecturer in Business and Economics at the University of Roehampton, Business School. She recently completed her PhD thesis which investigated the involvement of international financial institutions, such as the IMF, in the Macedonian transition and economic reform process in the 1990s. Her most recent papers are under review in the South East European Journal of Economics and Business and the Radical Review of Political Economy.