Who are the ‘winners and losers’ of globalisation? Have those voting against globalisation really been left behind, or have the benefits of free markets simply not been communicated to them well enough? Drawing on recent research, Philipp Harms and Jakob Schwab write that it is mostly the low-skilled in rich countries and the high-skilled in poor ones who view multinationals negatively.

The past months have been characterised by what can be called a “backlash against globalisation”. This development became most visible in the outcome of the Brexit referendum in the UK and the election of Donald Trump as the future president of the US. In both cases, the preceding campaigns massively referred to anti-globalisation sentiments in the population, as do others in Germany, France, the Netherlands, etc. The discussion about the origins of these phenomena has centred on the question whether those voting in favour of isolationism have, indeed, been left behind by globalisation, or whether the benefits of international market integration have simply not been communicated well to them. The latter perspective implies that voting against the integration of one’s own country into the world economy is an ill-informed, possibly irrational choice.

Economists have, on the contrary, always argued that – although economic globalisation has the potential to be beneficial ‘in sum’ – there may be winners and losers. In our recent research, we explore whether it is those who are likely to be harmed by globalisation that develop a negative view on international market integration. More specifically, we concentrate on the view that people hold on the effects of multinational enterprises, i.e. the most visible representatives of economic globalisation.

Across the countries that we analyse, some similarities can be observed: It is generally the younger, better educated individuals who have a more positive view on multinationals. Moreover, people who stand higher in their respective work hierarchies as well as richer individuals tend to welcome a large presence of foreign companies. This is not surprising: Younger, better educated persons are more likely to be employed by multinational enterprises and hence benefit from them directly. Better job positions indicate qualifications beyond pure school education, which may also be rewarded by multinational enterprises. Finally, those who earn a higher wage might be those benefitting directly from multinationals as employees, but it may also be the case that a generally higher income makes people more likely to consume the products and services offered by multinational enterprises and hence take a more positive stand on them.

However, we not only observe a large heterogeneity in the attitude towards foreign companies across individuals, but also across countries. Figure 1 plots the share of respondents who have a rather positive view on (foreign) multinational enterprises for all countries that we have analysed. We can see that in France, only 20 per cent of respondents do not express a negative opinion about the activity of multinational enterprises, whereas in Sweden, this share is close to 60 per cent. We show that this cannot be explained by the specific composition of the French and Swedish populations. Instead, we find that there are certain country characteristics that raise the likelihood that an individual expresses a more (less) hostile attitude towards multinational enterprises.

In particular, it is a robust finding that citizens of more unequal societies and of countries that are characterised by high corruption have a rather negative view on multinational enterprises. The same holds for countries where the domestic capital market is less developed. We interpret this as evidence that a macroeconomic and institutional environment that allows individuals to participate in the gains from the presence of foreign firms contributes to a more positive public attitude towards multinational enterprises.

Figure 1: Share of individuals who express a positive attitude toward multinational enterprises, by country 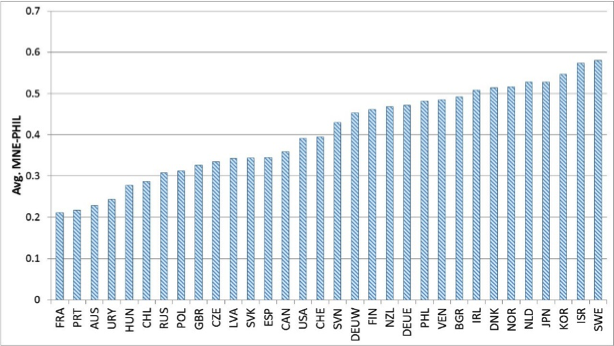 But it is not only the average acceptance of the activity of multinationals that differs across countries, but also the effect of individual characteristics on a person’s view of multinational firms. The more diverse the activities of multinational companies are in different settings, the more diverse their distributional effects can be – and consequently the potential to influence agents’ perceptions. Hence, individual traits that raise the likelihood that a person expresses a positive attitude towards MNEs in one country may result in a more negative attitude in another country.

Note: This chart indicates how a higher level of educational attainment, other things being equal, affects the likelihood of adopting a positive attitude toward multinational enterprises in the richest and the poorest country of our sample, respectively.

Note: This chart indicates the way in which being a firm owner, other things being equal, affects the likelihood of adopting a positive attitude toward multinational enterprises in the richest and the poorest country of our sample, respectively.

Our results thus provide evidence that relative attitudes towards multinational enterprises are shaped by predictable economic and distributional effects of their activities. This is true across individuals, but also across countries. In addition, our findings demonstrate that implementing inclusive macroeconomic institutions and taking a specific look at the particular features of North-North and North-South globalisation may be a prerequisite for addressing the resentment against economic globalisation.

Note: This article gives the views of the authors, and not the position of EUROPP – European Politics and Policy, nor of the London School of Economics. It is based on the authors’ paper Like it or not? How the Economic and Institutional Environment Shapes Individual Attitudes towards Multinational Enterprises, Gutenberg School Discussion Paper No. 1515, presented at the 2016 Congress of the European Economic Association in Geneva, and it was first published at our sister blog LSE Business Review.