Armenia held elections on 2 April which saw the ruling Republican Party of Armenia win the largest share of the vote. Armine Ishkanian indicates that the result was highly disappointing for civil society groups and democracy activists in the country. The question now is whether these groups will succumb to frustration and despair, or whether they will begin the difficult and time-intensive work of building democracy from the bottom up.

After a quarter of a century of ‘transitioning’ to democracy, Armenia remains at best a partly free ‘managed’ democracy and at worst a semi-consolidated authoritarian regime. The country has high levels of poverty and inequality (over 30% of Armenians live under the poverty line, with 47% of those aged 15 and above being unemployed) and the discontent with the status quo has led to continual emigration since the early 1990s and mass protests over recent years.

In the immediate aftermath of the election on 2 April, in which the ruling Republican (Hanrapetakan) Party of Armenia, received nearly 50% of the vote, questions have been raised as to why, despite growing discontent with the political and socio-economic status quo, including the unresolved conflict in Nagorno Karabakh, so many Armenian citizens appear to have given their support to the ruling party? 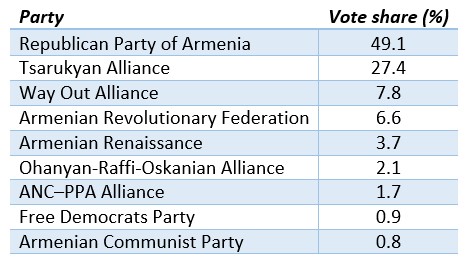 Note: These are preliminary results and will change. Figures rounded to first decimal place.

There is now something of an air of resignation among some segments of Armenian civil society, coupled with frustration, disillusionment, and a growing realisation that the majority of Armenian citizens are not interested in democracy and human rights, and are indeed prepared to sell their votes to the highest bidder, even if that means returning the ruling regime to power.

The fetishisation of elections

Since independence, elections have been used as benchmarks in measuring the level of democratisation in Armenia and other post-Soviet countries, as well as for assessing the progress these countries have made in their transitions to democracy. A great deal of time and money has been spent on training, preparation, and the observation and monitoring of elections by donors, intergovernmental organisations and NGOs over the past 25 years. But this fetishisation of elections, and in particular of the election day itself, ignores the wider political and social dynamics which can and do influence voter behaviour.

What we have seen in recent years is a focus on technical solutions to addressing voting irregularities and fraud. Many scholars criticise development agencies’ preference for technical and managerialist approaches. As James Ferguson famously argued in The Anti-Politics Machine, technical solutions are more attractive to donors and development agencies as it provides them with a place to ‘plug’ themselves into relatively easily and without appearing to be too politically intrusive. While maintaining a stance of technocratic, objective, neutrality, such technical approaches often ignore the political and structural causes of voting irregularities and are therefore poorly placed to address them.

For example, in preparation for Armenia’s 2017 elections, the European Union spent €7 million developing voter identification technologies and installing video cameras to live stream polling stations. The hope was that these new technologies would “diminish the likelihood of voter fraud on election day and will limit tampering with the electoral process inside polling stations”. While the EU acknowledged that its assessment of Armenia’s elections would not be limited to observing electoral procedures on election day itself, this large investment indicates an attempt to use a technical solution to address a problem whose causes are political and structural.

The irregularities in Armenia’s electoral process, which include vote buying and intimidation of voters, occur before and outside of election day in places and spaces where livestreaming video cameras are unable to reach. They happen in kindergartens and schools, in workplaces, and offices across Armenia in the lead up to a vote. Either through coercion, intimidation, or promises of future benefits, voters are persuaded into selling their support. Coercion alone is an insufficient explanation for voter behaviour, as some voters are actively exercising their agency to pursue their material interests by trading in a commodity (i.e. their vote). To address these problems, it is not enough to capture vote tampering through cameras; we also need to understand why some people are prepared to sell their votes.

Second, another popular election day monitoring strategy is the use of observation missions. This year, for the first time, some of the Armenian diaspora were actively encouraged and invited to participate in election observations through the Citizen Observer Initiative. This initiative, which was organised by a coalition of NGOs, called on the Armenian diaspora to “take a stand on the side of democracy and rule of law”. The Transparency Tour 2017, which exemplifies what many scholars describe as a type of ‘volun-tourism’ included meetings with ‘local pro-democracy activists and thought leaders’, an opportunity to learn about Armenian political institutions, and to get immersed in ‘society, culture and current events’.

While election observation missions indeed have some value, this practice is another technical solution which fetishises election day and ignores the processes leading up to the vote. While hundreds of individuals from the Armenian diaspora travelled to participate as observers, their numbers were overshadowed by the number of local observers from some well-known and respected NGOs as well as some more obscure and somewhat dubious organisations. The observation missions organised by the latter groups, are, according to local sources, an indication of the vote-riggers propensity to learn, adapt, and innovate.

To be clear, the point here is not to argue that technological solutions and observation missions are not necessary. On the contrary, they can be of great assistance in enhancing public confidence in the electoral process. However, they are no substitute for the much more difficult process of understanding and addressing the underlying causes and factors which lead people to sell their votes.

Civil society and democracy in an age of anger and mistrust

According to most normative interpretations, civil society plays an important role in democracy building by promoting active civic participation, dialogue and debate, as well as developing social capital and trust. Yet in recent years, public trust in many institutions, including political parties, trade unions and NGOs, has sharply declined, not just in Armenia, but in many parts of the world. Today, some claim, we are living in the age of anger and mistrust and in an era where politics is influenced by fear and anxiety. Many scholars agree that recent protests linked to these issues around the world reflect rising concerns about a lack of democracy, social justice and dignity, as well as growing precarity and inequality.

Since 2010, Armenia has had its share of protests and civic mobilisations against corruption, the absence of the rule of law/democracy, the rise of oligarchic capitalism, and a failure by the formal political elites to address the concerns of ordinary Armenian citizens. In my own research, I found that activists in Armenia often understood citizenship to mean that individuals have rights as well as responsibilities toward their communities and their country. As such, they would encourage people to become the ‘owners’ [derer] of their country: active subjects rather than passive and silent bystanders in society who privately complain about problems, but do not take any public action to change things.

Yet, they also acknowledged that despite the visible anger and discontent, this sense of empowered citizenship and civic responsibility was not widespread in Armenia. As Sona Manusyan writes, there continues to be ‘resistance against resistance in Armenia’ and there ‘simultaneously exists a desire to change the situation alongside a fear of change.’ Some Yerevan-based activists have attempted to build links with communities and individuals outside the capital to widen participation, but most recognise that much more needs to be done to raise awareness and to build a culture of democracy.

Once the dust has settled, it remains to be seen how civil society in Armenia will respond to the latest elections. Will it succumb to frustration and despair or will it begin the difficult and time-intensive work of building democracy from the bottom up? There is clearly much to be done and it is too soon to make predictions.