Unlike its planes, easyJet prices go up but don’t come down: The longer you wait, the more you pay, write Marco Alderighi, Alberto A. Gaggero and Claudio A. Piga. 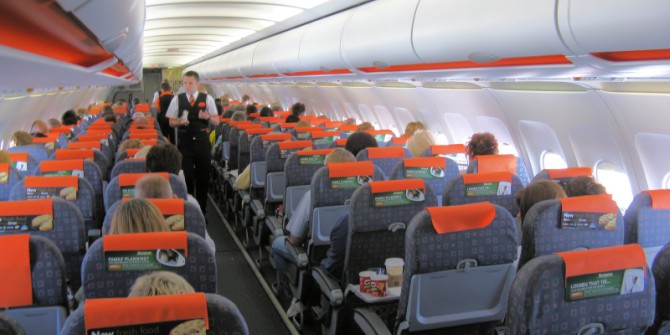 A standard definition of dynamic pricing in airline markets typically focuses on how fares evolve over the booking period that precedes a flight’s take-off. Our research shows that such a definition is lacking because it fails to connect fare changes to some guiding principles of revenue management, defined as the combined methods used by carriers to set their fares. Once such a connection is made, we can highlight counter-intuitive instances of dynamic pricing where, on the one hand, the fare of the seat on sale, the one prospective buyers observe, does not change, or, on the other, the fare change does not correspond to a form of dynamic pricing.

The evidence in our work was obtained by tracking more than 37,000 flights operated by easyJet over the May 2014 – June 2015 period. For each flight, we retrieved fares at regular intervals starting 18 weeks before its departure. Figure 1 focuses on fare changes, both increases and decreases, for the first seat on sale, whose price is the one shown after a query on the carrier’s website. The Figure reports the aggregate proportion of observed fare changes; notably, price dynamism is more intense during the last eight booking weeks, with similar shares in terms of increases and decreases; however, the former become more prevalent in the last three weeks. Our novel approach to study fare dynamics reveals that tracking the fare of the seat on sale, which is what the literature has so far done, largely misrepresents the degree of dynamic pricing generated by the revenue managers’ activity. To understand why, we need to metaphorically ‘lift the bonnet’ and look inside the carrier’s revenue management engine. 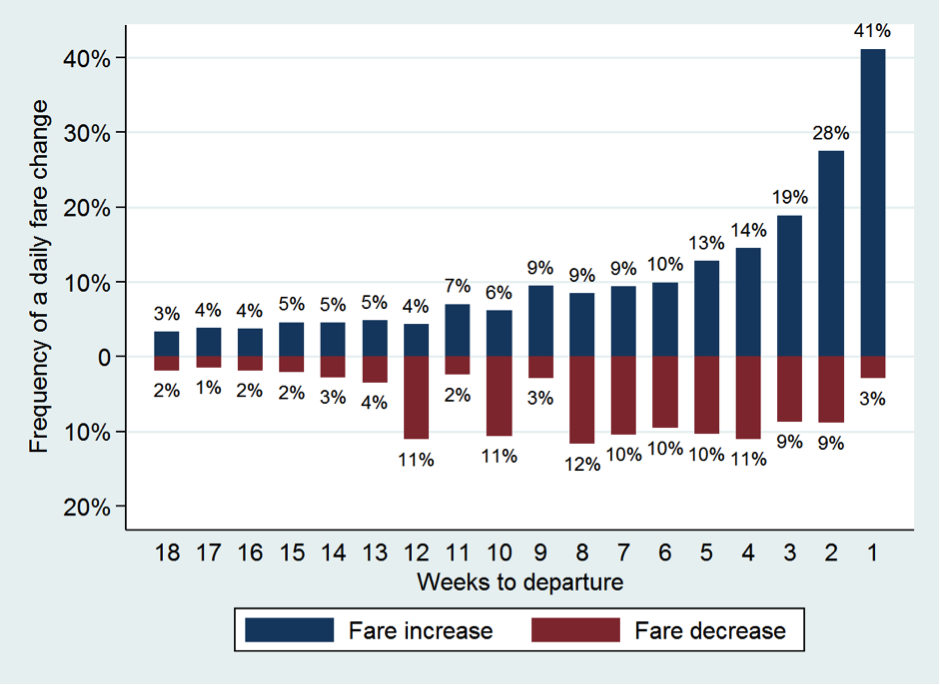 Doing so reveals that, contrary to common belief, at each point in time carriers do not post only one fare on their reservation system, but, instead, a fare for each seat that is still available on the flight. That is, a fundamental aspect of revenue management consists in the definition of an increasing sequence that assigns a fare, starting from the cheapest and ending with the dearest, to each seat. Figure 2 provides an example, which is characteristic of all the flights in the sample. It shows that the fare sequence includes a series of ‘buckets of seats’ – that is, groups of seats that have the same price tag. The size of each bucket varies, so that the overall shape of a fare sequence resembles a ‘staircase’ with steps of varying width. In the example, six days before departure there are 30 available seats: the first two on sale are priced £75; the others at £87, £101, £117 (all with four seats), £136 (three seats) and £156 (thirteen seats). The evidence suggests that the ‘design of the sequence’ – that is, the fare levels representing the height of each step – is rather fixed: the carrier tends to use, throughout the entire booking period, the same ones and only occasionally adds a ‘new level’. 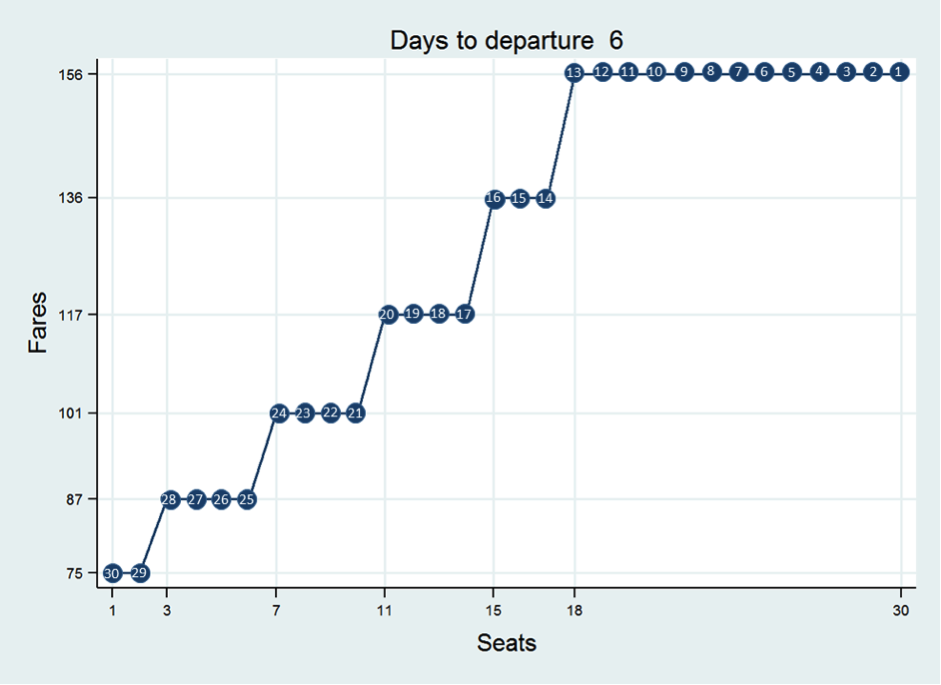 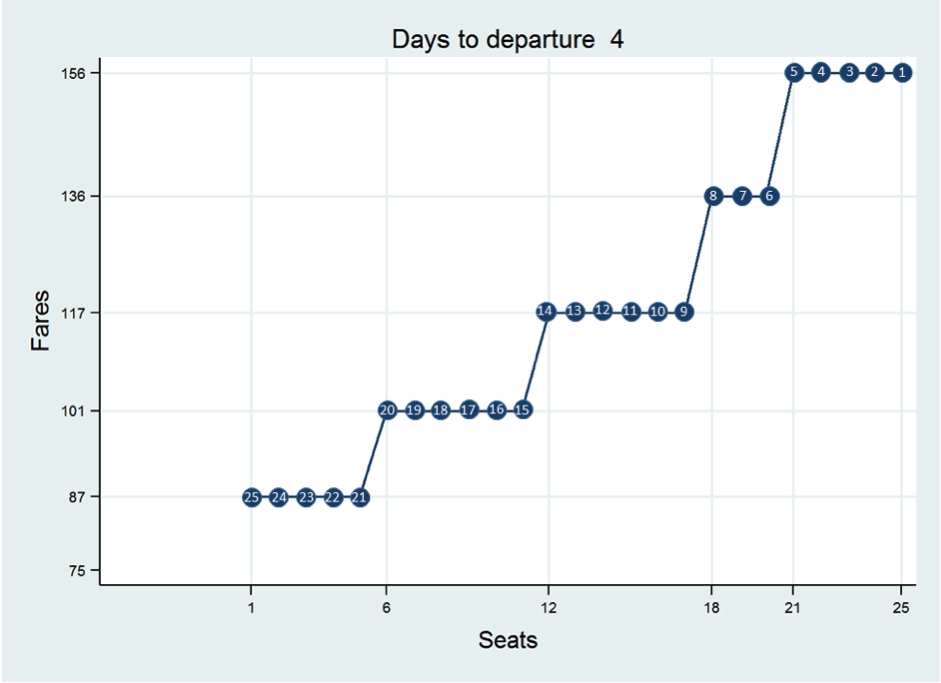 The focus on a full sequence of fares implies that dynamic pricing should not be defined exclusively in terms of the evolution of the fare of the seat on sale, but by considering how all the fares in the sequence evolve. Essentially, dynamic pricing corresponds to a modification of the sequence structure as revealed by a reallocation of a seat to a higher or lower bucket. More importantly, through the sequence we can tease out the effect of two forces that are responsible for the evolution of the fare of the first seat on sale, that is, the fare at which customers can buy at each point in time. To explain both, we refer to the lower part of Figure 2.

The first force implies that the fare goes up as the plane fills up. In the example, the number of available seats dropped to 25, that is, the seats denoted with numbers 30 to 26 were sold, each at the fare indicated by their bucket. Thus, the offered fare increased from £75 to £87 simply by following the predetermined sequence, and in this sense, we do not count this as an example of dynamic pricing because the bucket allocation of the sold seats did not change over time. This force is largely responsible for the observed upward trend of fares over time and for most of the price increases reported in Figure 1; we estimate that every time a seat is sold, the fare increases on average by about 2%.

The second force is related to the perishable nature of the airline service, which implies that the airline faces a strong incentive to reduce fares in the attempt to minimise the number of empty seats at take-off. It may engender ‘hidden forms of dynamic pricing’, which may imply that dynamic pricing takes place even if customers cannot detect any change in the online offered fare. This happens when the carrier shifts some seats from higher to lower-priced buckets, thus generating a modification of the fare sequence that is not associated with a change in the offered fare.

In the example, the seats labelled 24 to 6 were moved to a lower bucket. As a result, the £87 bucket ends up containing 5 seats, while it only had 4 two days before. The £101 and £117 buckets also increased in size, while the top bucket shrank to contain only 5 seats. Such variations are indeed forms of dynamic pricing. Interestingly, the replenishment of the £87 bucket implies that the offered fare will remain at this level longer, thereby slowing down the rate of increase of the offered fare due to the force illustrated in the first force. Thus, contrary to the common belief that airlines rely on dynamic pricing to charge higher fares, we highlight how dynamic pricing can achieve the opposite effect.

In the last ten days before departure, another force comes into play; this is when we observe a higher likelihood for the seat on sale to be moved to an upper bucket even if no sales have occurred. Such a form of dynamic pricing, unlike the other, has a price discrimination motivation since it is implemented at a time when the carrier expects that a larger proportion of business people is part of the potential clientele.

The combined effect of all these three forces on the offered fare is that a consumer following its evolution for a given flight would observe, on average, an upward trajectory, which may act as a disincentive for strategic customers, those who would postpone buying in the hope of some last-minute discount.

Note: This article is based on the authors’ presentation at the 2017 conference of the Royal Economic Society, it was originally published at LSE Business Reviews and it gives the views of the author, and not the position of EUROPP – European Politics and Policy, nor of the London School of Economics.

Alberto A. Gaggero – University of Pavia
Alberto A. Gaggero is Associate Professor of Economics at the University of Pavia (Italy), where he teaches Microeconomics and Applied Industrial Organization. Previously, he held research positions at the University of Genoa, at the Hogeschool-Universiteit Brussel and at the Belgian Ministry of Economic Affairs. He has been a visiting scholar at Northeastern University and at Hochschule für Wirtschaft und Recht. His research interests are in applied microeconomics, with particular focus on pricing and competition.