The European Union has always sought to portray itself as having a distinct identity built on a set of values. But how is this identity constructed through the EU’s treaties? Odelia Oshri and Shaul Shenhav decipher the ways in which the EU’s discourse on values has changed throughout the 60 years of European integration. They show that two values have traditionally dominated the Union’s treaty texts – ‘democracy’ and a ‘market economy’. However, since the 1990s, new values have penetrated this discourse and have served to legitimate the expansion of the EU’s scope and ambition.

Remnants of the Berlin Wall in Etterbeek, Brussels, in 2009 – the 20th anniversary of the fall of the Wall, Credit: European Parliament/ Pietro Naj-Oleari (CC BY-NC-ND 2.0)

As the EU has grown in size and scope over the past decades, European integration has become less uniform in its nature. Some countries have effectively opted out of ‘ever-closer union’, deciding not to join the Schengen area or the euro. Notions such as ‘multi-speed Europe’, ‘variable geometry’ and ‘Europe à la carte’ have long shaped scholarly and political discourses. They refer to the phenomenon of policy differentiation, or more specifically, of opting out.

There has been a considerable amount of research into the policy differentiation this involves. Much rarer has been analysis of the value differentiation. This relative silence is puzzling, as three decades ago, in the mid-1980s, the European community had already declared its intention to integrate new norms and values of the ‘normative power’ kind. These values were ‘social justice’, ‘peace’, ‘human rights’ and ‘European identity’.

But introducing and implementing change to the core values of the EU had the potential to undermine its traditional objective of ‘speaking with one voice’ – and consequently, of destabilising the Union. Given recent developments like Brexit and shifts in the EU’s discourse, this organisational dilemma has a new pertinence. Has the EU eventually integrated these new values into its treaty texts – and if so, how? What has changed in terms of the EU’s capacity to adapt to changing times, if anything?

New values have indeed penetrated the EU’s treaty discourse during the various stages of integration. Clearly, starting close to zero in the Lisbon Treaty, the organisational ‘talk’ about new values adds up to 30 percent of the total ‘talk’ on values (see the left-hand panel in the figure below). Specifically, among the discourse on new values, ‘talk’ about ‘peace’ and ‘human rights’ has grown over the years of integration.

Figure: Proportion of values to values in European treaties 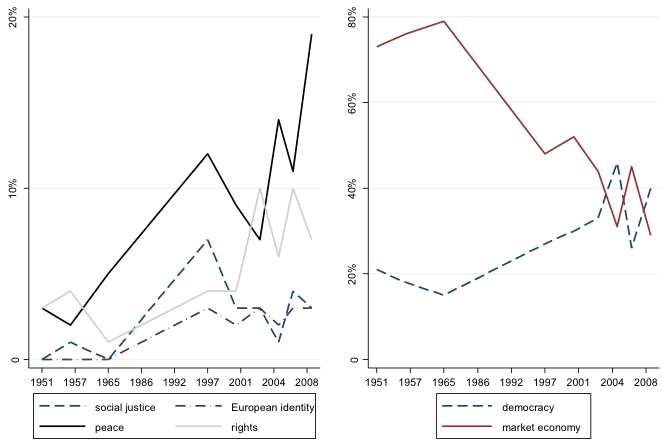 To compile this figure, we examined the relationship among entities (which can be understood as the “actors” or “characters”) and values in the text of the EU’s treaties. To do this, we calculated the proximities between values and entities in the Union’s treaty texts with the premise that values that tend to appear together with entities relate to and project onto them. While ‘democracy’ and a ‘market economy’ are near the EU entity in the texts, new values are close to other entities: ‘peace’ tends to appear discursively closer to the member states of the EU, but it also tends to be mentioned alongside entities beyond the EU and the EU itself. Similarly, while the values of ‘human rights’ and a ‘European identity’ appear nearer citizens, ‘social justice’ is located closer to European regions.

This strategy enables the EU’s discourse to integrate new values, but positions them at a “safe distance” from the EU as a textual entity – thus distinguishing between the established and the new values. It presupposes a mechanism that mediates between two opposing forces: change and continuity. Honing in on the EU entity in the text, one would be tempted to deduce that the EU’s identity is stable, as throughout the Union’s treaty texts it is constantly associated with ‘democracy’ and a ‘market economy’. However, if we zoom out from the EU entity, it is possible to identify and trace the textual change in which new norms and values have indeed penetrated Europe’s normative identity.

The changing landscape of expectations and pressures has shaped the trajectories of each EU treaty. The Union seems to constantly reconstruct its character through a set of norms and values that posit and mark it as an emerging political entity with new, updated and reframed values. Yet, at the same time, the EU maintains its domestic values of a ‘market economy’ and ‘democracy’ in spite of – or perhaps in harmony with – change. As it builds and refines its ethos, the Union – as a ‘speaking subject’ – hones its image as a prudent shaper and reshaper of values and identity frontiers.

Note: This article was originally published by our sister site, Democratic Audit. It gives the views of the authors, not the position of EUROPP – European Politics and Policy or the London School of Economics.